Encyclopedia
A profession is a vocation
Vocation
A vocation , is a term for an occupation to which a person is specially drawn or for which they are suited, trained or qualified. Though now often used in non-religious contexts, the meanings of the term originated in Christianity.-Senses:...
founded upon specialized educational training
Training
The term training refers to the acquisition of knowledge, skills, and competencies as a result of the teaching of vocational or practical skills and knowledge that relate to specific useful competencies. It forms the core of apprenticeships and provides the backbone of content at institutes of...
, the purpose of which is to supply disinterested counsel and service to others, for a direct and definite compensation, wholly apart from expectation of other business gain. 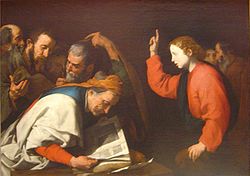 Classically, there were only three : divinity
Divinity (academic discipline)
Divinity is the study of Christian and other theology and ministry at a school, divinity school, university, or seminary. The term is sometimes a synonym for theology as an academic, speculative pursuit, and sometimes is used for the study of applied theology and ministry to make a distinction...
, medicine
Medicine
Medicine is the science and art of healing. It encompasses a variety of health care practices evolved to maintain and restore health by the prevention and treatment of illness....
, and law
Law
Law is a system of rules and guidelines which are enforced through social institutions to govern behavior, wherever possible. It shapes politics, economics and society in numerous ways and serves as a social mediator of relations between people. Contract law regulates everything from buying a bus...
—the so-called "learned professions." The main milestones which mark an occupation being identified as a profession are:


With the rise of technology and occupational specialization in the 19th century, other bodies began to claim professional status: pharmacy
Pharmacy
Pharmacy is the health profession that links the health sciences with the chemical sciences and it is charged with ensuring the safe and effective use of pharmaceutical drugs...
, veterinary medicine
Veterinary medicine
Veterinary Medicine is the branch of science that deals with the prevention, diagnosis and treatment of disease, disorder and injury in non-human animals...
, nursing
Nursing
Nursing is a healthcare profession focused on the care of individuals, families, and communities so they may attain, maintain, or recover optimal health and quality of life from conception to death....
, teaching, librarianship, optometry
Optometry
Optometry is a health care profession concerned with eyes and related structures, as well as vision, visual systems, and vision information processing in humans. Optometrists, or Doctors of Optometry, are state licensed medical professionals trained to prescribe and fit lenses to improve vision,...
and social work
Social work
Social Work is a professional and academic discipline that seeks to improve the quality of life and wellbeing of an individual, group, or community by intervening through research, policy, community organizing, direct practice, and teaching on behalf of those afflicted with poverty or any real or...
, all of which could claim, using these milestones, to be professions by 1900.

Just as some professions rise in status and power through various stages, so others may decline. This is characterized by the red cloaks of bishops giving way to the black cloaks of lawyers and then to the white cloaks of doctors. More recently formalized disciplines, such as architecture
Architecture
Architecture is both the process and product of planning, designing and construction. Architectural works, in the material form of buildings, are often perceived as cultural and political symbols and as works of art...
, now have equally long periods of study associated with them.

Although professions enjoy high status and public prestige, not all professionals earn high salaries, and even within specific professions there exist significant inequalities of compensation; for example, a trial lawyer specializing in tort
Tort
A tort, in common law jurisdictions, is a wrong that involves a breach of a civil duty owed to someone else. It is differentiated from a crime, which involves a breach of a duty owed to society in general...
litigation on a contingent-fee
Contingent fee
A contingent fee or conditional fee is any fee for services provided where the fee is only payable if there is a favourable result...
basis may earn several times what a prosecutor
District attorney
In many jurisdictions in the United States, a District Attorney is an elected or appointed government official who represents the government in the prosecution of criminal offenses. The district attorney is the highest officeholder in the jurisdiction's legal department and supervises a staff of...
or public defender
Public defender
The term public defender is primarily used to refer to a criminal defense lawyer appointed to represent people charged with a crime but who cannot afford to hire an attorney in the United States and Brazil. The term is also applied to some ombudsman offices, for example in Jamaica, and is one way...
earns.

The ranking of established professions in the United States based on the above milestones shows surveying
Surveying
See Also: Public Land Survey SystemSurveying or land surveying is the technique, profession, and science of accurately determining the terrestrial or three-dimensional position of points and the distances and angles between them...
first (George Washington, Thomas Jefferson, and Abraham Lincoln were all land surveyors before entering politics), followed by medicine
Medicine
Medicine is the science and art of healing. It encompasses a variety of health care practices evolved to maintain and restore health by the prevention and treatment of illness....
, actuarial science
Actuarial science
Actuarial science is the discipline that applies mathematical and statistical methods to assess risk in the insurance and finance industries. Actuaries are professionals who are qualified in this field through education and experience...
, law
Law
Law is a system of rules and guidelines which are enforced through social institutions to govern behavior, wherever possible. It shapes politics, economics and society in numerous ways and serves as a social mediator of relations between people. Contract law regulates everything from buying a bus...
, dentistry
Dentistry
Dentistry is the branch of medicine that is involved in the study, diagnosis, prevention, and treatment of diseases, disorders and conditions of the oral cavity, maxillofacial area and the adjacent and associated structures and their impact on the human body. Dentistry is widely considered...
, civil engineering
Civil engineering
Civil engineering is a professional engineering discipline that deals with the design, construction, and maintenance of the physical and naturally built environment, including works like roads, bridges, canals, dams, and buildings...
, logistics
Logistics
Logistics is the management of the flow of goods between the point of origin and the point of destination in order to meet the requirements of customers or corporations. Logistics involves the integration of information, transportation, inventory, warehousing, material handling, and packaging, and...
, architecture
Architecture
Architecture is both the process and product of planning, designing and construction. Architectural works, in the material form of buildings, are often perceived as cultural and political symbols and as works of art...
and accounting.


Formation of a profession

A profession arises when any trade or occupation transforms itself through "the development of formal qualifications based upon education, apprenticeship, and examinations, the emergence of regulatory bodies with powers to admit and discipline members, and some degree of monopoly rights."

Professions tend to be autonomous, which means they have a high degree of control of their own affairs: "professionals are autonomous insofar as they can make independent judgments about their work". This usually means "the freedom to exercise their professional judgement."

Professions enjoy a high social status, regard and esteem conferred upon them by society. This high esteem arises primarily from the higher social function of their work, which is regarded as vital to society as a whole and thus of having a special and valuable nature. All professions involve technical, specialised and highly skilled work often referred to as "professional expertise." Training for this work involves obtaining degrees and professional qualifications (see Licensure
Licensure
Licensure refers to the granting of a license, which gives a "permission to practice." Such licenses are usually issued in order to regulate some activity that is deemed to be dangerous or a threat to the person or the public or which involves a high level of specialized skill...
) without which entry to the profession is barred (occupational closure). Training also requires regular updating of skills through continuing education
Continuing education
Continuing education is an all-encompassing term within a broad spectrum of post-secondary learning activities and programs. The term is used mainly in the United States and Canada...
.

All professions have power. This power is used to control its own members, and also its area of expertise and interests. A profession tends to dominate, police and protect its area of expertise and the conduct of its members, and exercises a dominating influence over its entire field which means that professions can act monopolist, rebuffing competition from ancillary trades and occupations, as well as subordinating and controlling lesser but related trades. A profession is characterised by the power and high prestige it has in society as a whole. It is the power, prestige and value that society confers upon a profession that more clearly defines it.


Characteristics of a profession

There is considerable agreement about defining the characteristic features of a profession. They have a "professional association, cognitive base, institutionalized training, licensing, work autonomy, colleague control... (and) code of ethics," to which Larson then also adds, "high standards of professional and intellectual excellence," (Larson, p. 221) that "professions are occupations with special power and prestige," (Larson, p.x) and that they comprise "an exclusive elite group," (Larson, p. 20) in all societies. Members of a profession have also been defined as "workers whose qualities of detachment, autonomy, and group allegiance are more extensive than those found among other groups...their attributes include a high degree of systematic knowledge; strong community orientation and loyalty; self-regulation; and a system of rewards defined and administered by the community of workers."

A profession has been further defined as: "a special type of occupation...(possessing) corporate solidarity...prolonged specialized training in a body of abstract knowledge, and a collectivity or service orientation...a vocational sub-culture which comprises implicit codes of behaviour, generates an esprit de corps among members of the same profession, and ensures them certain occupational advantages...(also) bureaucratic structures and monopolistic privileges to perform certain types of work...professional literature, legislation, etc."