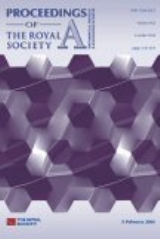 The two journals are currently the Royal Society's main research journals. Many celebrated names in science have published their research in Proc. R. Soc., including Paul Dirac
Paul Dirac
Paul Adrien Maurice Dirac, OM, FRS was an English theoretical physicist who made fundamental contributions to the early development of both quantum mechanics and quantum electrodynamics...
, Werner Heisenberg
Werner Heisenberg
Werner Karl Heisenberg was a German theoretical physicist who made foundational contributions to quantum mechanics and is best known for asserting the uncertainty principle of quantum theory...
, James Clerk Maxwell
James Clerk Maxwell
James Clerk Maxwell of Glenlair was a Scottish physicist and mathematician. His most prominent achievement was formulating classical electromagnetic theory. This united all previously unrelated observations, experiments and equations of electricity, magnetism and optics into a consistent theory...
, Ernest Rutherford
Ernest Rutherford
Ernest Rutherford, 1st Baron Rutherford of Nelson OM, FRS was a New Zealand-born British chemist and physicist who became known as the father of nuclear physics...
, and Erwin Schrödinger
Erwin Schrödinger
Erwin Rudolf Josef Alexander Schrödinger was an Austrian physicist and theoretical biologist who was one of the fathers of quantum mechanics, and is famed for a number of important contributions to physics, especially the Schrödinger equation, for which he received the Nobel Prize in Physics in 1933...
.


Proceedings of the Royal Society A


Proceedings of the Royal Society B

This series covers research related to biological sciences. Topics covered in particular include ecology
Ecology
Ecology is the scientific study of the relations that living organisms have with respect to each other and their natural environment. Variables of interest to ecologists include the composition, distribution, amount , number, and changing states of organisms within and among ecosystems...
, behavioural ecology
Behavioral ecology
Behavioral ecology, or ethoecology, is the study of the ecological and evolutionary basis for animal behavior, and the roles of behavior in enabling an animal to adapt to its environment...
and evolutionary biology; significant numbers of papers in epidemiology
Epidemiology
Epidemiology is the study of health-event, health-characteristic, or health-determinant patterns in a population. It is the cornerstone method of public health research, and helps inform policy decisions and evidence-based medicine by identifying risk factors for disease and targets for preventive...
, human biology
Human biology
Human Biology is an interdisciplinary area of study that examines humans through the influences and interplay of many diverse fields such as genetics, evolution, physiology, epidemiology, ecology, nutrition, population genetics and sociocultural influences. It is closely related to...
, neuroscience
Neuroscience
Neuroscience is the scientific study of the nervous system. Traditionally, neuroscience has been seen as a branch of biology. However, it is currently an interdisciplinary science that collaborates with other fields such as chemistry, computer science, engineering, linguistics, mathematics,...
, palaeontology
Paleontology
Paleontology "old, ancient", ὄν, ὀντ- "being, creature", and λόγος "speech, thought") is the study of prehistoric life. It includes the study of fossils to determine organisms' evolution and interactions with each other and their environments...
and biomechanics
Biomechanics
Biomechanics is the application of mechanical principles to biological systems, such as humans, animals, plants, organs, and cells. Perhaps one of the best definitions was provided by Herbert Hatze in 1974: "Biomechanics is the study of the structure and function of biological systems by means of...
have also appeared in the journal. Proceedings B publishes predominately research articles but also both commissioned and non-commissioned reviews, comments, replies, and commentaries. In 2005, Biology Letters
Biology Letters
Biology Letters is a peer-reviewed scientific journal. It was split off as a separate journal from the Philosophical Transactions of the Royal Society B: Biological Sciences in 2005 after having been published as a supplement. Originally it was published quarterly, but from 2007 it has been...
(originally a supplement to Proceedings B), was launched as an independent journal publishing short articles from across biology.

The current Editor of Proc R Soc B is Michael Hassell
Michael Hassell
Michael Patrick Hassell CBE, FRS is a British biologist, noted for his work in population ecology, especially in insects. He is a professor at Imperial College London....
FRS. Proceedings B has an Impact Factor of 4.857 and is ranked 7th in Biology.