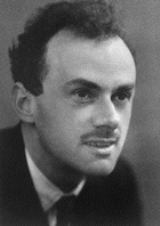 Overview
Paul Adrien Maurice Dirac, OM, FRS (dɪˈræk ; 1902–84) was an English
United Kingdom
The United Kingdom of Great Britain and Northern IrelandIn the United Kingdom and Dependencies, other languages have been officially recognised as legitimate autochthonous languages under the European Charter for Regional or Minority Languages...
theoretical physicist who made fundamental contributions to the early development of both quantum mechanics
Quantum mechanics
Quantum mechanics, also known as quantum physics or quantum theory, is a branch of physics providing a mathematical description of much of the dual particle-like and wave-like behavior and interactions of energy and matter. It departs from classical mechanics primarily at the atomic and subatomic...
and quantum electrodynamics
Quantum electrodynamics
Quantum electrodynamics is the relativistic quantum field theory of electrodynamics. In essence, it describes how light and matter interact and is the first theory where full agreement between quantum mechanics and special relativity is achieved...
. He held the Lucasian Chair of Mathematics at the University of Cambridge
University of Cambridge
The University of Cambridge is a public research university located in Cambridge, United Kingdom. It is the second-oldest university in both the United Kingdom and the English-speaking world , and the seventh-oldest globally...
and spent the last fourteen years of his life at Florida State University
Florida State University
The Florida State University is a space-grant and sea-grant public university located in Tallahassee, Florida, United States. It is a comprehensive doctoral research university with medical programs and significant research activity as determined by the Carnegie Foundation...
.

Among other discoveries, he formulated the Dirac equation
Dirac equation
The Dirac equation is a relativistic quantum mechanical wave equation formulated by British physicist Paul Dirac in 1928. It provided a description of elementary spin-½ particles, such as electrons, consistent with both the principles of quantum mechanics and the theory of special relativity, and...
, which describes the behaviour of fermion
Fermion
In particle physics, a fermion is any particle which obeys the Fermi–Dirac statistics . Fermions contrast with bosons which obey Bose–Einstein statistics....
s, and predicted the existence of antimatter
Antimatter
In particle physics, antimatter is the extension of the concept of the antiparticle to matter, where antimatter is composed of antiparticles in the same way that normal matter is composed of particles...
.

Dirac shared the Nobel Prize in physics
Nobel Prize in Physics
The Nobel Prize in Physics is awarded once a year by the Royal Swedish Academy of Sciences. It is one of the five Nobel Prizes established by the will of Alfred Nobel in 1895 and awarded since 1901; the others are the Nobel Prize in Chemistry, Nobel Prize in Literature, Nobel Peace Prize, and...
for 1933 with Erwin Schrödinger
Erwin Schrödinger
Erwin Rudolf Josef Alexander Schrödinger was an Austrian physicist and theoretical biologist who was one of the fathers of quantum mechanics, and is famed for a number of important contributions to physics, especially the Schrödinger equation, for which he received the Nobel Prize in Physics in 1933...
, "for the discovery of new productive forms of atom
Atom
The atom is a basic unit of matter that consists of a dense central nucleus surrounded by a cloud of negatively charged electrons. The atomic nucleus contains a mix of positively charged protons and electrically neutral neutrons...
ic theory."
Paul Adrien Maurice Dirac was born at his parents' home in Bristol
Bristol
Bristol is a city, unitary authority area and ceremonial county in South West England, with an estimated population of 433,100 for the unitary authority in 2009, and a surrounding Larger Urban Zone with an estimated 1,070,000 residents in 2007...
, England on 8 August 1902, and grew up in the Bishopston
Bishopston, Bristol
Bishopston the name of both a council ward of the city of Bristol, England, and a suburb of the city that falls within that ward. Bishopston is situated around the Gloucester Road , the main northern arterial road in the city. The ward includes St Bonaventures and Ashley Down parishes, as well as...
area of the city.

What is the ratio of virtual particles to real particles , say around a single "real" electron. Is this sea infinite or just a few particles near by t...
More
x