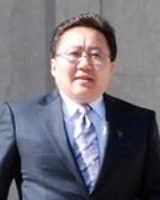 The President is elected by the citizens of Mongolia. Political parties with representation in the State Great Khural nominate candidates. The President can be re-elected only one time. The President can be removed from office
Impeachment
Impeachment is a formal process in which an official is accused of unlawful activity, the outcome of which, depending on the country, may include the removal of that official from office as well as other punishment....
if two-thirds of the Khural find him guilty of abusing his powers or violating his oath. Before inauguration, however, the President-elect has to renounce the membership of any political party.


Powers of the President

There is debate about who should be considered the first President of Mongolia. The title does not actually date back to before Mongolia's democratisation, but the office itself is seen as extending through Mongolia's period of communist rule. Sometimes, the Bogd Khan
Bogd Khan
The Bogd Khan was enthroned as the Great Khaan of Mongolia on 29 December 1911, when Outer Mongolia declared independence from the Qing Dynasty after the Xinhai Revolution. He was born in the Kham region of eastern Tibet, today's Sichuan province of the People's Republic of China...
(seen as the reincarnations of senior lama
Lama
Lama is a title for a Tibetan teacher of the Dharma. The name is similar to the Sanskrit term guru .Historically, the term was used for venerated spiritual masters or heads of monasteries...
) are seen as Mongolia's first "presidents", but more commonly, the title is given to the secular leaders who followed them. Balingiin Tserendorj
Balingiin Tserendorj
Balingiin Tserendorj was a Mongolian political figure and the first Prime Minister of the People's Republic of Mongolia from 1924 to 1928.-Early life and career:...
, who was acting head of state in 1924, is sometimes seen as the first president, but it was not until Navaandorjiin Jadambaa
Navaandorjiin Jadambaa
Navaandorjiin Jadambaa was the first republican Head of State of Mongolia. He became Chairman of the State Great Hural in November 1924 following the death of the Bogd Khan...
was appointed Chairman of the State Great Khural in November that there was an official leader. Only a day later, the leadership role was reorganised as the Chairman of the Presidium of the State Little Khural (the Little Khural being the executive committee of the Great Khural). Later, the Little Khural was abolished, and its powers were returned to the Great Khural — as such, the title of the president became Chairman of the Presidium of the State Great Khural. This was shortly afterwards changed to Chairman of the Presidium of the People's Great Khural, following a change in nomenclature. Finally, in 1990, the title President of Mongolia was adopted.