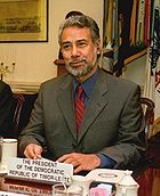 Encyclopedia
The President
President
A president is a leader of an organization, company, trade union, university, or country.Etymologically, a president is one who presides, who sits in leadership...
of East Timor is the Head of state
Head of State
A head of state is the individual that serves as the chief public representative of a monarchy, republic, federation, commonwealth or other kind of state. His or her role generally includes legitimizing the state and exercising the political powers, functions, and duties granted to the head of...
of the East Timor
East Timor
The Democratic Republic of Timor-Leste, commonly known as East Timor , is a state in Southeast Asia. It comprises the eastern half of the island of Timor, the nearby islands of Atauro and Jaco, and Oecusse, an exclave on the northwestern side of the island, within Indonesian West Timor...
ese republic
Republic
A republic is a form of government in which the people, or some significant portion of them, have supreme control over the government and where offices of state are elected or chosen by elected people. In modern times, a common simplified definition of a republic is a government where the head of...
, elected by popular vote for a five-year term. The role is largely symbolic, though he is able to veto some legislation. Following elections, the president appoints as the prime minister, the leader of the majority party or majority coalition
Coalition
A coalition is a pact or treaty among individuals or groups, during which they cooperate in joint action, each in their own self-interest, joining forces together for a common cause. This alliance may be temporary or a matter of convenience. A coalition thus differs from a more formal covenant...
. As head of government
Head of government
Head of government is the chief officer of the executive branch of a government, often presiding over a cabinet. In a parliamentary system, the head of government is often styled prime minister, chief minister, premier, etc...
the prime minister presides over the Council of State or cabinet
Cabinet (government)
A Cabinet is a body of high ranking government officials, typically representing the executive branch. It can also sometimes be referred to as the Council of Ministers, an Executive Council, or an Executive Committee.- Overview :...
.


Presidents of East Timor during War for Independence


Presidents of the independent Democratic Republic of East Timor