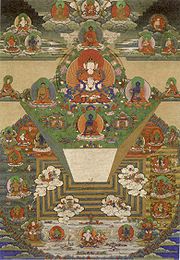 Mount Meru (also called Sumeru
Sumeru
Sumeru or Sineru is the name of the central world-mountain in Buddhist cosmology. Etymologically, the proper name of the mountain is Meru , to which is added the approbatory prefix su-, resulting in the meaning "excellent Meru" or "wonderful Meru".The concept of Sumeru is closely related to the...
i.e. the "Excellent Meru") is a sacred mountain in Hindu
Hinduism
Hinduism is the predominant and indigenous religious tradition of the Indian Subcontinent. Hinduism is known to its followers as , amongst many other expressions...
and Buddhist cosmology
Buddhist cosmology
Buddhist cosmology is the description of the shape and evolution of the Universe according to the canonical Buddhist scriptures and commentaries.-Introduction:...
as well as in Jain cosmology
Jain cosmology
Jain cosmology is the description of the shape and functioning of the physical and metaphysical Universe and its constituents according to Jainism, which includes the canonical Jain texts, commentaries and the writings of the Jain philosopher-monks...
, and is considered to be the center of all the physical, metaphysical and spiritual universes. It is also the abode of Lord Brahma
Brahma
Brahma is the Hindu god of creation and one of the Trimurti, the others being Vishnu and Shiva. According to the Brahma Purana, he is the father of Mānu, and from Mānu all human beings are descended. In the Ramayana and the...
and the Demi-Gods (Deva
Deva (Hinduism)
' is the Sanskrit word for god or deity, its related feminine term is devi. In modern Hinduism, it can be loosely interpreted as any benevolent supernatural beings. The devs in Hinduism, also called Suras, are often juxtaposed to the Asuras, their half brothers. Devs are also the maintainers of...
s).

The mountain is said to be 84,000 Yojanas high (which is around 1082000 km (672,325.3 mi), or 85 times the Earths's diameter). Many famous Hindu
Hindu
Hindu refers to an identity associated with the philosophical, religious and cultural systems that are indigenous to the Indian subcontinent. As used in the Constitution of India, the word "Hindu" is also attributed to all persons professing any Indian religion...
and Jain temples have been built as symbolic representations of this mountain. The highest point (the finial bud) on the pyatthat
Pyatthat
Pyatthat is the name of a multi-tiered and spired roof commonly found in Burmese royal and Buddhist architecture, especially pagoda compounds, monasteries and palace buildings. The pyatthat is made of successive roofs, with a box-like structure between each roof called the lebaw...
, a Burmese-style multi-tiered roof, represents Mount Meru.

Mount Meru of Hindu
Hindu
Hindu refers to an identity associated with the philosophical, religious and cultural systems that are indigenous to the Indian subcontinent. As used in the Constitution of India, the word "Hindu" is also attributed to all persons professing any Indian religion...
traditions has clearly mythical aspects, being described as 84,000 Yojanas high, and having the Sun along with all its planets and stars in the Solar System revolve around it as one unit.

The dimensions attributed to Mount Meru, all the references to it being as a part of the Cosmic Ocean, along with several statements like that the Sun along with all the planets (including Earth itself) circumbulate the mountain, make determining its location most difficult, according to most scholars. However, a small handful number of western scholars have tried quite hard to identify Mount Meru or Sumeru with the Pamirs, north-east of Kashmir
Kashmir
Kashmir is the northwestern region of the Indian subcontinent. Until the mid-19th century, the term Kashmir geographically denoted only the valley between the Great Himalayas and the Pir Panjal mountain range...
.

The Suryasiddhanta mentions that Mt Meru lies in 'the middle of the Earth' ("bhugola-madhya") in the land of the Jambunada (Jambudvipa). Narpatijayacharyā, a 9th century text, based on mostly unpublished texts of Yāmala Tantra, mentions " Prithvī-madhye shrūyate drishyate na tu" ('Su-meru is heard to be in the middle of the Earth, but is not seen there'). Vārāha Mihira, in his Panch-siddhāntikā, claims Mt Meru to be at the North Pole (though no mountain exists there as well). Suryasiddhānta, however, mentions a Mt Meru in the middle of Earth, besides a Sumeru and a Kumeru at both the Poles.

There exist several versions of Cosmology in existing Hindu texts. In one of them, cosmologically, the Meru mountain was also described as being surrounded by Mandrachal Mountain to the east, Supasarva Mountain to the west, Kumuda Mountain to the north and Kailash to the south.

One Yojana
Yojana
A Yojana is a Vedic measure of distance used in ancient India. The exact measurement is disputed amongst scholars with distances being given between 6 to 15 kilometers ....
can be taken to mean about 11.5 km (9 mi) though its magnitude seems to differ over time periods. E.g. the Earth's circumference is 3,200 Yojanas according to Vārāhamihira and slightly less so in the Āryabhatiya, but is given to be 5,026.5 Yojanas in the Suryasiddhānta. The Matsya Purana
Matsya Purana
Matsya Purana is the sixteenth purana of the Hindu scriptures. During the period of mahapralaya, Lord Vishnu had taken Matsya Avatar to save the seeds of all lives and Manu...
and the Bhāgvata Purāna along with some other Hindu texts consistently give the exorbitant dimension of 84,000 Yojanas to Mount Meru which translates into 672,000 miles or 1.082 million kilometers.

Mount Meru finds mention innumerable times in Hindu lore. Some of the better-known legends are recounted here. Legends say that Mount Meru and the wind god Vayu
Vayu
Vāyu is a primary Hindu deity, the Lord of the winds, the father of Bhima and the spiritual father of Lord Hanuman...
were good friends. However, the sage
Wise old man
The wise old man is an archetype as described by Carl Jung, as well as a classic literary figure, and may be seen as a stock character...
Narada
Narada
Narada or Narada Muni is a divine sage from the Vaisnava tradition, who plays a prominent role in a number of the Puranic texts, especially in the Bhagavata Purana, and in the Ramayana...
approached Vayu and incited him to humble the mountain. Vayu blew with full force for one full year, but Meru was shielded by Garuda
Garuda
The Garuda is a large mythical bird or bird-like creature that appears in both Hindu and Buddhist mythology.From an Indian perspective, Garuda is the Hindu name for the constellation Aquila and...
with his wings (he was flying high). However, after a year Garuda took respite for some time. Thus the apex of the mountain was broken and it fell into the sea and created the island of Lanka
Lanka
Sri Lanka is the name given in Hindu mythology to the island fortress capital of the legendary king Ravana in the great Hindu epics, the Ramayana and the Mahabharata...
.

Mount Meru was said to be the residence of King Padamja Brahma in antiquity.

The Puranas
Puranas
The Puranas are a genre of important Hindu, Jain and Buddhist religious texts, notably consisting of narratives of the history of the universe from creation to destruction, genealogies of kings, heroes, sages, and demigods, and descriptions of Hindu cosmology, philosophy, and geography.Puranas...
and Hindu epics, often state that Surya
Surya
Surya Suraya or Phra Athit is the chief solar deity in Hinduism, one of the Adityas, son of Kasyapa and one of his wives, Aditi; of Indra; or of Dyaus Pitar . The term Surya also refers to the Sun, in general. Surya has hair and arms of gold...
, i.e. the sun-God, along with all its planets and stars together as one unit, circumambulate Mount Meru every day.

This mythical mountain of gods was mentioned in Tantu Pagelaran
Tantu Pagelaran
Tantu Pagelaran or Tangtu Panggelaran is Old Javanese manuscript written in Kawi language originated from 15th century Majapahit period. The manuscript is describing the mythical origin of Java island.-Legend of moving Meru to Java:...
, an Old Javanese manuscript written in Kawi language
Kawi language
Kawi is a literary and prose language on the islands of Java, Bali, and Lombok, based on Old Javanese, a language with a sizable vocabulary of Sanskrit loanwords. Kawi is the ancestor language of modern Javanese. The name "kawi" is derived from the root ku, which in Sanskrit means “poet”, and, in...
from 15th century Majapahit period. The manuscript is describing the mythical origin of Java
Java
Java is an island of Indonesia. With a population of 135 million , it is the world's most populous island, and one of the most densely populated regions in the world. It is home to 60% of Indonesia's population. The Indonesian capital city, Jakarta, is in west Java...
island, and the legend of moving some parts of mount Meru to Java. The manuscript explained that Batara Guru (Shiva
Shiva
Shiva is a major Hindu deity, and is the destroyer god or transformer among the Trimurti, the Hindu Trinity of the primary aspects of the divine. God Shiva is a yogi who has notice of everything that happens in the world and is the main aspect of life. Yet one with great power lives a life of a...
) has ordered the god Brahma
Brahma
Brahma is the Hindu god of creation and one of the Trimurti, the others being Vishnu and Shiva. According to the Brahma Purana, he is the father of Mānu, and from Mānu all human beings are descended. In the Ramayana and the...
and Vishnu
Vishnu
Vishnu is the Supreme god in the Vaishnavite tradition of Hinduism. Smarta followers of Adi Shankara, among others, venerate Vishnu as one of the five primary forms of God....
to fill the Java island with human beings. However at that time Java island was floating freely on the ocean, ever tumbling and always shaking. To make the island still, the gods decided to nail the island upon the earth by moving the part of Mahameru in Jambudvipa (India
India
India , officially the Republic of India , is a country in South Asia. It is the seventh-largest country by geographical area, the second-most populous country with over 1.2 billion people, and the most populous democracy in the world...
) and attaching it upon Java. The resulting mountain is Mount Semeru, the tallest mountain of Java.