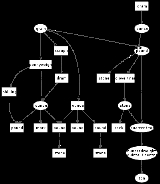 Encyclopedia
The avoirdupois system is a system of weights
Units of measurement
A unit of measurement is a definite magnitude of a physical quantity, defined and adopted by convention and/or by law, that is used as a standard for measurement of the same physical quantity. Any other value of the physical quantity can be expressed as a simple multiple of the unit of...
(or, properly, mass
Mass
Mass can be defined as a quantitive measure of the resistance an object has to change in its velocity.In physics, mass commonly refers to any of the following three properties of matter, which have been shown experimentally to be equivalent:...
) based on a pound
Pound (mass)
The pound or pound-mass is a unit of mass used in the Imperial, United States customary and other systems of measurement...
of 16 ounce
Ounce
The ounce is a unit of mass with several definitions, the most commonly used of which are equal to approximately 28 grams. The ounce is used in a number of different systems, including various systems of mass that form part of the imperial and United States customary systems...
s. It is the everyday system of weight used in the United States
United States
The United States of America is a federal constitutional republic comprising fifty states and a federal district...
and is still widely used to varying degrees by many people in Canada
Canada
Canada is a North American country consisting of ten provinces and three territories. Located in the northern part of the continent, it extends from the Atlantic Ocean in the east to the Pacific Ocean in the west, and northward into the Arctic Ocean...
, the United Kingdom
United Kingdom
The United Kingdom of Great Britain and Northern IrelandIn the United Kingdom and Dependencies, other languages have been officially recognised as legitimate autochthonous languages under the European Charter for Regional or Minority Languages...
, and some other former British colonies despite the official adoption
Metrication
Metrication refers to the introduction and use of the SI metric system, the international standard for physical measurements. This has involved a long process of independent and systematic conversions of countries from various local systems of weights and measures. Metrication began in France in...
(or partial adoption in the case of the UK) of the metric system
Metric system
The metric system is an international decimalised system of measurement. France was first to adopt a metric system, in 1799, and a metric system is now the official system of measurement, used in almost every country in the world...
. An alternate system of mass is generally used for precious materials, Troy weight
Troy weight
Troy weight is a system of units of mass customarily used for precious metals, gemstones, and black powder.There are 12 troy ounces per troy pound, rather than the 16 ounces per pound found in the more common avoirdupois system. The troy ounce is 480 grains, compared with the avoirdupois ounce,...
.


History of the term

is from Old French
Old French
Old French was the Romance dialect continuum spoken in territories that span roughly the northern half of modern France and parts of modern Belgium and Switzerland from the 9th century to the 14th century...
aveir de peis (later avoir de pois), literally "goods of weight" (Old French aveir, "property, goods", also "to have", comes from the Latin
Latin
Latin is an Italic language originally spoken in Latium and Ancient Rome. It, along with most European languages, is a descendant of the ancient Proto-Indo-European language. Although it is considered a dead language, a number of scholars and members of the Christian clergy speak it fluently, and...
habere, "to have, to hold, to possess property"; de = "from"/"of", cf. Latin; peis = "weight", from Latin pensum). This term originally referred to a class of merchandise: aveir de peis, "goods of weight", things that were sold in bulk and were weighed on large steelyards
Steelyard balance
A steelyard balance or steelyard is a straight-beam balance with arms of unequal length. It incorporates a counterweight which slides along the calibrated longer arm to counterbalance the load and indicate its weight...
or balances. Only later did it become identified with a particular system of units used to weigh such merchandise. The imaginative orthography
Orthography
The orthography of a language specifies a standardized way of using a specific writing system to write the language. Where more than one writing system is used for a language, for example Kurdish, Uyghur, Serbian or Inuktitut, there can be more than one orthography...
of the day and the passage of the term through a series of languages (Latin, Anglo-French and English) has left many variants of the term, such as haberty-poie and haber de peyse. (The Norman
Norman language
Norman is a Romance language and one of the Oïl languages. Norman can be classified as one of the northern Oïl languages along with Picard and Walloon...
peis became the Parisian
Standard French
Standard French is an unofficial term for a standard variety of the French language...
pois. In the 17th century de was replaced with du.)

These are the units in their original French
French language
French is a Romance language spoken as a first language in France, the Romandy region in Switzerland, Wallonia and Brussels in Belgium, Monaco, the regions of Quebec and Acadia in Canada, and by various communities elsewhere. Second-language speakers of French are distributed throughout many parts...
forms:


Note: The plural of quintal is quintaux.

When people in the United Kingdom
United Kingdom
The United Kingdom of Great Britain and Northern IrelandIn the United Kingdom and Dependencies, other languages have been officially recognised as legitimate autochthonous languages under the European Charter for Regional or Minority Languages...
began to use this system they included the stone
Stone (weight)
The stone is a units of measurement that was used in many North European countries until the advent of metrication. It value, which ranged from 3 kg to 12 kg, varied from city to city and also often from commodity to commodity...
, which was eventually defined as 14 avoirdupois pounds. The quarter, hundredweight, and ton were altered, respectively, to 28 lb, 112 lb, and 2,240 lb in order for mass
Mass
Mass can be defined as a quantitive measure of the resistance an object has to change in its velocity.In physics, mass commonly refers to any of the following three properties of matter, which have been shown experimentally to be equivalent:...
es to be easily converted between them and stones. The following are the units in the British
English unit
English units are the historical units of measurement used in England up to 1824, which evolved as a combination of the Anglo-Saxon and Roman systems of units...
or imperial
Imperial unit
The system of imperial units or the imperial system is the system of units first defined in the British Weights and Measures Act of 1824, which was later refined and reduced. The system came into official use across the British Empire...
adaptation of the avoirdupois system:


Note: The plural form of the unit stone is either stone or stones, but stone is most frequently used.

The 13 British colonies
Thirteen Colonies
The Thirteen Colonies were English and later British colonies established on the Atlantic coast of North America between 1607 and 1733. They declared their independence in the American Revolution and formed the United States of America...
in North America
North America
North America is a continent wholly within the Northern Hemisphere and almost wholly within the Western Hemisphere. It is also considered a northern subcontinent of the Americas...
used the avoirdupois system. But they continued to use the British system as it was, without the evolution that was occurring in Britain in the use of the stone unit. In 1824 there was landmark new weights and measures legislation in the United Kingdom that the United States did not adopt.

In the United States, quarters, hundredweights, and tons remain defined as 25, 100, and 2,000 lb respectively. The quarter is now virtually unused, as is the hundredweight outside of agriculture and commodities. If disambiguation is required, then they are referred to as the smaller "short" units in the United States, as opposed to the larger British "long" units. Grains are used worldwide for measuring gunpowder
Gunpowder
Gunpowder, also known since in the late 19th century as black powder, was the first chemical explosive and the only one known until the mid 1800s. It is a mixture of sulfur, charcoal, and potassium nitrate - with the sulfur and charcoal acting as fuels, while the saltpeter works as an oxidizer...
and smokeless powder charges. Historically, the dram has also been used worldwide for measuring gunpowder charges, for measuring powder charges for shotguns and large blackpowder rifles
4 bore
Four bore or 4 bore is an obsolete black powder caliber of the 19th century, used for the hunting of large and potentially dangerous game animals. The specifications place this caliber between the larger two bore and the lesser six bore...
.

In the avoirdupois system, all units are multiples or fractions of the pound, which is now defined as 0.45359237 kg
Kilogram
The kilogram or kilogramme , also known as the kilo, is the base unit of mass in the International System of Units and is defined as being equal to the mass of the International Prototype Kilogram , which is almost exactly equal to the mass of one liter of water...
in most of the English-speaking world since 1959. (See the Mendenhall Order
Mendenhall Order
The Mendenhall Order marked a decision to change the fundamental standards of length and mass of the United States from the customary standards based on those of England to metric standards. It was issued on April 5, 1893 by Thomas Corwin Mendenhall, superintendent of the U.S...
for references.)

Due to the ambiguous meanings of "weight" as referring to both mass and force, it is sometimes erroneously asserted that the pound is only a unit of force. However, as defined above the pound is a unit of mass, which agrees with common usage. Also see pound-force
Pound-force
The pound force is a unit of force in some systems of measurement including English engineering units and British gravitational units.- Definitions :...
and pound-mass.