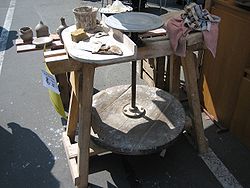 In pottery
Pottery
Pottery is the material from which the potteryware is made, of which major types include earthenware, stoneware and porcelain. The place where such wares are made is also called a pottery . Pottery also refers to the art or craft of the potter or the manufacture of pottery...
, a potter's wheel is a machine used in asma of round ceramic ware. The wheel may also be used during process of trimming the excess body from dried ware and for applying incised decoration or rings of color. Use of potter's wheel became widespread throughout the Old World
Old World
The Old World consists of those parts of the world known to classical antiquity and the European Middle Ages. It is used in the context of, and contrast with, the "New World" ....
but was unknown in the Pre-Columbian
Pre-Columbian
The pre-Columbian era incorporates all period subdivisions in the history and prehistory of the Americas before the appearance of significant European influences on the American continents, spanning the time of the original settlement in the Upper Paleolithic period to European colonization during...
New World
New World
The New World is one of the names used for the Western Hemisphere, specifically America and sometimes Oceania . The term originated in the late 15th century, when America had been recently discovered by European explorers, expanding the geographical horizon of the people of the European middle...
, where pottery was hand-made by methods that included coiling and beating.

A potter's wheel may occasionally be referred to as a "potter's lathe". However, that term is better used for another kind of machine that is used for a different shaping process, turning, similar to that used for shaping of metal and wooden articles.

The techniques of jiggering and jolleying can be seen as extensions of the potter's wheel: in jiggering, a shaped tool is slowly brought down onto the plastic clay body that has been placed on top of the rotating plaster mold. The jigger tool shapes one face, the mold the other. The term is specific to the shaping of flat ware, such as plates, whilst a similar technique, jolleying, refers to the production of hollow ware, such as cups.


Many early ceramics were hand-built using a simple coiling technique in which clay was rolled into long threads that were then pinched and beaten together to form the body of a vessel. In the coiling method of construction, all of the energy required to form the main part of a piece is supplied indirectly by the hands of the potter. Early ceramics built by coiling were often placed on mats or large leaves to allow them to be worked more conveniently. The evidence of this lies in mat or leaf impressions left in the clay of the base of the pot. This arrangement allowed the potter to turn the vessel under construction, rather than walk around it to add coils of clay.

The earliest forms of the potter's wheel (tournettes or slow wheels) were probably developed as an extension to this procedure. Tournettes, in use around 3,500 BC in the Near East, were turned slowly by hand or by foot while coiling a pot. Only a small range of vessels were fashioned on the tournette, suggesting that it was used by a limited number of potters. The introduction of the slow wheel increased the efficiency of hand-powered pottery production.

Later the fast wheel was developed, which operated on the flywheel
Flywheel
A flywheel is a rotating mechanical device that is used to store rotational energy. Flywheels have a significant moment of inertia, and thus resist changes in rotational speed. The amount of energy stored in a flywheel is proportional to the square of its rotational speed...
principle. It utilised energy stored in the rotating mass of the heavy stone wheel itself to speed the process. This wheel was wound up and charged with energy by kicking, or pushing it around with a stick, providing a centrifugal force. The fast wheel enabled a new process of pottery-making to develop, called "throwing", in which a lump of clay was placed centrally on the wheel and then squeezed, lifted and shaped as the wheel turned. The process tends to leave rings on the inside of the pot and can be used to create thinner-walled pieces and a wider variety of shapes, including stemmed vessels, so wheel-thrown pottery can be distinguished from hand-made. Potters could now produce many more pots per hour, a first step towards industrialization.


Many modern scholars suggest that the fast potter's wheel was first developed in Mesopotamia
Mesopotamia
Mesopotamia is a toponym for the area of the Tigris–Euphrates river system, largely corresponding to modern-day Iraq, northeastern Syria, southeastern Turkey and southwestern Iran.Widely considered to be the cradle of civilization, Bronze Age Mesopotamia included Sumer and the...
. A stone potter's wheel found at the Mesopotamian city of Ur
Ur
Ur was an important city-state in ancient Sumer located at the site of modern Tell el-Muqayyar in Iraq's Dhi Qar Governorate...
in modern-day Iraq
Iraq
Iraq ; officially the Republic of Iraq is a country in Western Asia spanning most of the northwestern end of the Zagros mountain range, the eastern part of the Syrian Desert and the northern part of the Arabian Desert....
has been dated to about 3129 BC, but fragments of wheel-thrown pottery of an even earlier date have been recovered in the same area. However, southeast Europe and China have also been claimed as possible places of origin.
In the Iron Age
Iron Age
The Iron Age is the archaeological period generally occurring after the Bronze Age, marked by the prevalent use of iron. The early period of the age is characterized by the widespread use of iron or steel. The adoption of such material coincided with other changes in society, including differing...
, the potter's wheel in common use had a turning platform about a meter above the floor, connected by a long axle to a heavy flywheel at ground level. This arrangement allowed the potter to keep the turning wheel rotating by kicking the flywheel with the foot, leaving both hands free for manipulating the vessel under construction. However, from an ergonomic
Ergonomics
Ergonomics is the study of designing equipment and devices that fit the human body, its movements, and its cognitive abilities.The International Ergonomics Association defines ergonomics as follows:...
standpoint, sweeping the foot from side to side against the spinning hub is rather awkward. At some point, an alternative solution was invented that involved a crankshaft
Crankshaft
The crankshaft, sometimes casually abbreviated to crank, is the part of an engine which translates reciprocating linear piston motion into rotation...
with a lever that converted up-and-down motion into rotary motion. Sewing machines such as those pioneered by the Singer Corporation
Singer Corporation
Singer Corporation is a manufacturer of sewing machines, first established as I.M. Singer & Co. in 1851 by Isaac Merritt Singer with New York lawyer Edward Clark. Best known for its sewing machines, it was renamed Singer Manufacturing Company in 1865, then The Singer Company in 1963. It is...
have manual models operated by this method.

The use of the motor-driven wheel has become common in modern times, particularly with craft potters and educational institutions, although human-powered ones are still in use and are much preferred by some studio potters
Studio pottery
Studio pottery is made by modern artists working alone or in small groups, producing unique items of pottery in small quantities, typically with all stages of manufacture carried out by one individual. Much studio pottery is tableware or cookware but an increasing number of studio potters produce...
.

There are many techniques in use for throwing ceramic containers, although this is a typical procedure:

A round, moist lump of clay
Clay
Clay is a general term including many combinations of one or more clay minerals with traces of metal oxides and organic matter. Geologic clay deposits are mostly composed of phyllosilicate minerals containing variable amounts of water trapped in the mineral structure.- Formation :Clay minerals...
body is thrown down onto the wheel head or a bat (sometimes called a "batterboard") attached to it. The lump is made even and forced to the centre of the wheel by applying pressure with the hands. The thrower finds the center of the clay by moving a thumb across the lump until no more friction is felt. The thumb is pressed into the center of the lump, stopping about 5 mm from the wheel head. The hole thus made is widened. The sides thus defined are pulled up and made thinner by pressure between the hands. The vessel is shaped, and the mouth is smoothed. The vessel is cut from the wheel head with a cheese wire and left to stiffen. Sometimes the stiffened vessel is inverted on the wheel and trimmed with a sharp tool.

A skilled potter can quickly throw a vessel from 15 kg of clay. Alternatively, by throwing and adding coils of clay then throwing again, pots up to four feet high may be made, the heat of a blowlamp being used to firm each thrown section before adding the next coil. In Chinese manufacture, very large pots are made by two throwers working simultaneously.

The potter's wheel in myth and legend

In Ancient Egyptian mythology
Egyptian mythology
Ancient Egyptian religion was a complex system of polytheistic beliefs and rituals which were an integral part of ancient Egyptian society. It centered on the Egyptians' interaction with a multitude of deities who were believed to be present in, and in control of, the forces and elements of nature...
, the deity
Deity
A deity is a recognized preternatural or supernatural immortal being, who may be thought of as holy, divine, or sacred, held in high regard, and respected by believers....
Khnum was said to have formed the first human
Human
Humans are the only living species in the Homo genus...
s on a potter's wheel.