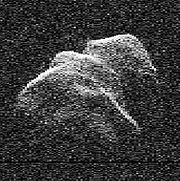 A potentially hazardous object (PHO) is an asteroid
Asteroid
Asteroids are a class of small Solar System bodies in orbit around the Sun. They have also been called planetoids, especially the larger ones...
or comet
Comet
A comet is an icy small Solar System body that, when close enough to the Sun, displays a visible coma and sometimes also a tail. These phenomena are both due to the effects of solar radiation and the solar wind upon the nucleus of the comet...
with an orbit
Orbit
In physics, an orbit is the gravitationally curved path of an object around a point in space, for example the orbit of a planet around the center of a star system, such as the Solar System...
such that it has the potential to make close approaches to the Earth
Earth
Earth is the third planet from the Sun, and the densest and fifth-largest of the eight planets in the Solar System. It is also the largest of the Solar System's four terrestrial planets...
and a size large enough to cause significant regional damage in the event of impact
Impact event
An impact event is the collision of a large meteorite, asteroid, comet, or other celestial object with the Earth or another planet. Throughout recorded history, hundreds of minor impact events have been reported, with some occurrences causing deaths, injuries, property damage or other significant...
.

An object is considered a PHO if its minimum orbit intersection distance
Minimum orbit intersection distance
Minimum orbit intersection distance is a measure used in astronomy to assess collision risk between astronomical objects. It is defined as the distance between the closest points of the osculating orbits of the two bodies in question. Of greatest interest is the risk of a collision with Earth;...
(MOID) with respect to Earth is less than 0.05 astronomical units (AU
Astronomical unit
An astronomical unit is a unit of length equal to about or approximately the mean Earth–Sun distance....
) and its diameter is at least 150 m (nearly 500 ft). This is big enough to cause regional devastation to human settlements unprecedented in human history in the case of a land impact, or a major tsunami
Tsunami
A tsunami is a series of water waves caused by the displacement of a large volume of a body of water, typically an ocean or a large lake...
in the case of an ocean
Ocean
An ocean is a major body of saline water, and a principal component of the hydrosphere. Approximately 71% of the Earth's surface is covered by ocean, a continuous body of water that is customarily divided into several principal oceans and smaller seas.More than half of this area is over 3,000...
impact. Such impact events occur on average around once per 10,000 years.

The diameter of most small asteroids is not well known and can only be estimated based on their brightness and distance. For this reason NASA
NASA
The National Aeronautics and Space Administration is the agency of the United States government that is responsible for the nation's civilian space program and for aeronautics and aerospace research...
and the Jet Propulsion Laboratory
Jet Propulsion Laboratory
Jet Propulsion Laboratory is a federally funded research and development center and NASA field center located in the San Gabriel Valley area of Los Angeles County, California, United States. The facility is headquartered in the city of Pasadena on the border of La Cañada Flintridge and Pasadena...
use the more practical measure of absolute magnitude
Absolute magnitude
Absolute magnitude is the measure of a celestial object's intrinsic brightness. it is also the apparent magnitude a star would have if it were 32.6 light years away from Earth...
. Any asteroid with an absolute magnitude of 22.0 or brighter is assumed to be of the required size, although only a coarse estimation of size can be found from the object's magnitude because an assumption must be made for its albedo
Albedo
Albedo , or reflection coefficient, is the diffuse reflectivity or reflecting power of a surface. It is defined as the ratio of reflected radiation from the surface to incident radiation upon it...
which is also not usually known for certain. The NASA near-Earth object
Near-Earth object
A near-Earth object is a Solar System object whose orbit brings it into close proximity with the Earth. All NEOs have a perihelion distance less than 1.3 AU. They include a few thousand near-Earth asteroids , near-Earth comets, a number of solar-orbiting spacecraft, and meteoroids large enough to...
program uses an assumed albedo of 0.13 for this purpose.

Near the start of October 2008, NASA had listed 982 potentially hazardous asteroids (PHAs) and 65 potentially hazardous comets (PHCs). The total Solar System
Solar System
The Solar System consists of the Sun and the astronomical objects gravitationally bound in orbit around it, all of which formed from the collapse of a giant molecular cloud approximately 4.6 billion years ago. The vast majority of the system's mass is in the Sun...
inventory continues to grow, with 1244 PHA known by August 2011. Projects such as Lincoln Near-Earth Asteroid Research
Lincoln Near-Earth Asteroid Research
The Lincoln Near-Earth Asteroid Research project is a cooperative project between the United States Air Force, NASA, and MIT's Lincoln Laboratory for the systematic discovery and tracking of near-Earth asteroids. LINEAR was responsible for the majority of asteroid detections since 1998 until...
and Catalina Sky Survey
Catalina Sky Survey
Catalina Sky Survey is a project to discover comets and asteroids, and to search for Near-Earth objects. More specifically, to search for potentially hazardous asteroids , that may pose a threat of impact.-Mission:...
continue to search for more PHOs. Each one found is studied by various means, including optical, infrared
Infrared
Infrared light is electromagnetic radiation with a wavelength longer than that of visible light, measured from the nominal edge of visible red light at 0.74 micrometres , and extending conventionally to 300 µm...
and radar
Radar
Radar is an object-detection system which uses radio waves to determine the range, altitude, direction, or speed of objects. It can be used to detect aircraft, ships, spacecraft, guided missiles, motor vehicles, weather formations, and terrain. The radar dish or antenna transmits pulses of radio...
observations, to determine its characteristics, such as size, composition, rotation state, and to more accurately determine its orbit. Both professional and amateur astronomers participate in such monitoring.

During an asteroid's close approaches to planets or moons it will be subject to gravitational perturbation
Perturbation (astronomy)
Perturbation is a term used in astronomy in connection with descriptions of the complex motion of a massive body which is subject to appreciable gravitational effects from more than one other massive body....
, modifying its orbit, and potentially changing a previously non-threatening asteroid into a PHA or vice versa. This is a reflection of the dynamic character of the Solar System.