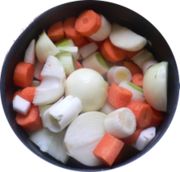 The pot-au-feu is a French
France
The French Republic , The French Republic , The French Republic , (commonly known as France , is a unitary semi-presidential republic in Western Europe with several overseas territories and islands located on other continents and in the Indian, Pacific, and Atlantic oceans. Metropolitan France...
beef stew. According to chef
Chef
A chef is a person who cooks professionally for other people. Although over time the term has come to describe any person who cooks for a living, traditionally it refers to a highly skilled professional who is proficient in all aspects of food preparation.-Etymology:The word "chef" is borrowed ...
Raymond Blanc
Raymond Blanc
Raymond Blanc OBE is a French chef, born in Besançon, France. Today he is one of the Britain's most respected chefs. Blanc is the owner and chef at Le Manoir aux Quat' Saisons, a hotel-restaurant in Great Milton, Oxfordshire, England. The restaurant has two Michelin stars and scored 9/10 in the...
, the pot-au feu is "the quintessence of French family cuisine, it is the most celebrated dish in France. It honours the tables of the rich and poor alike."

There are variations as to the cuts of beef and the vegetables involved, but a typical pot-au-feu contains:

Cooking cartilaginous meat in the stew will result in gelatin
Gelatin
Gelatin is a translucent, colorless, brittle , flavorless solid substance, derived from the collagen inside animals' skin and bones. It is commonly used as a gelling agent in food, pharmaceuticals, photography, and cosmetic manufacturing. Substances containing gelatin or functioning in a similar...
being dissolved into the broth. If the stew is allowed to cool, the broth may turn into a jelly
Thickening agent
Thickening agents, or thickeners, is the term applied to substances which increase the viscosity of a solution or liquid/solid mixture without substantially modifying its other properties; although most frequently applied to foods where the target property is taste, the term also is applicable to...
, resulting in an interesting texture. Allowing the stew to cool also allows the removal of excess fat
Fat
Fats consist of a wide group of compounds that are generally soluble in organic solvents and generally insoluble in water. Chemically, fats are triglycerides, triesters of glycerol and any of several fatty acids. Fats may be either solid or liquid at room temperature, depending on their structure...
, which floats on the surface and congeals.

The dish is often served with coarse salt
Salt
In chemistry, salts are ionic compounds that result from the neutralization reaction of an acid and a base. They are composed of cations and anions so that the product is electrically neutral...
and strong Dijon
Dijon
Dijon is a city in eastern France, the capital of the Côte-d'Or département and of the Burgundy region.Dijon is the historical capital of the region of Burgundy. Population : 151,576 within the city limits; 250,516 for the greater Dijon area....
mustard
Mustard (condiment)
Mustard is a condiment made from the seeds of a mustard plant...
and sometimes also with gherkin
Gherkin
The gherkin is a fruit similar in form and nutritional value to a cucumber. Gherkins and cucumbers belong to the same species , but are from different cultivar groups....
s pickled in vinegar.

The pot-au-feu broth may be used as a soup
Soup
Soup is a generally warm food that is made by combining ingredients such as meat and vegetables with stock, juice, water, or another liquid. Hot soups are additionally characterized by boiling solid ingredients in liquids in a pot until the flavors are extracted, forming a broth.Traditionally,...
(often enriched with rice
Rice
Rice is the seed of the monocot plants Oryza sativa or Oryza glaberrima . As a cereal grain, it is the most important staple food for a large part of the world's human population, especially in East Asia, Southeast Asia, South Asia, the Middle East, and the West Indies...
, pasta
Pasta
Pasta is a staple food of traditional Italian cuisine, now of worldwide renown. It takes the form of unleavened dough, made in Italy, mostly of durum wheat , water and sometimes eggs. Pasta comes in a variety of different shapes that serve for both decoration and to act as a carrier for the...
or toasted bread), as a base for sauce
Sauce
In cooking, a sauce is liquid, creaming or semi-solid food served on or used in preparing other foods. Sauces are not normally consumed by themselves; they add flavor, moisture, and visual appeal to another dish. Sauce is a French word taken from the Latin salsus, meaning salted...
s, or for cooking vegetables or pasta. There are ready-to-use concentrated cubes to make what purports to be pot-au-feu broth when water is added.

A pot-au-feu could be a continuous affair
Perpetual stew
A perpetual stew is a pot into which whatever one can find is placed and cooked. The pot is never emptied all the way, as ingredients are replenished as necessary. The concept is often a common element in descriptions of medieval inns. Perpetual stew can also be called a “hunter’s stew”.- Examples...
in the past, with new ingredients added as some is used; nowadays houses do not have a permanent fire in cold weather, and the dish is cooked for a specific meal.

Many countries have similar dishes with local ingredients.