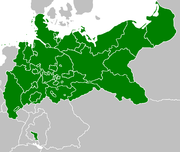 One of the functions of the North German Confederation
North German Confederation
The North German Confederation 1866–71, was a federation of 22 independent states of northern Germany. It was formed by a constitution accepted by the member states in 1867 and controlled military and foreign policy. It included the new Reichstag, a parliament elected by universal manhood...
was to handle the mail
Mail
Mail, or post, is a system for transporting letters and other tangible objects: written documents, typically enclosed in envelopes, and also small packages are delivered to destinations around the world. Anything sent through the postal system is called mail or post.In principle, a postal service...
and issue postage stamp
Postage stamp
A postage stamp is a small piece of paper that is purchased and displayed on an item of mail as evidence of payment of postage. Typically, stamps are made from special paper, with a national designation and denomination on the face, and a gum adhesive on the reverse side...
s, which it began doing, by means of the North German Postal Union (Norddeutschen Postbezirks), on 1 January 1868.

To accommodate the different monetary system
Monetary system
A monetary system is anything that is accepted as a standard of value and measure of wealth in a particular region.However, the current trend is to use international trade and investment to alter the policy and legislation of individual governments. The best recent example of this policy is the...
s in use by the various states, it issued a series valued in groschen
Groschen
Groschen was the name for a coin used in various German-speaking states as well as some non-German-speaking countries of Central Europe , the Danubian principalities...
for the Northern District, and another using kreuzer
Kreuzer
The Kreuzer, in English usually kreutzer, was a silver coin and unit of currency existing in the southern German states prior to the unification of Germany, and in Austria.-Early history:...
for the Southern District, distinguishing them by framing the value number in a circle for the groschen stamps, and in an oval for the kreuzers. All of these stamps were inscribed "NORDDEUTSCHER POSTBEZIRK".

In addition, there was a special quarter-schilling stamp for Hamburg
Hamburg
-History:The first historic name for the city was, according to Claudius Ptolemy's reports, Treva.But the city takes its modern name, Hamburg, from the first permanent building on the site, a castle whose construction was ordered by the Emperor Charlemagne in AD 808...
, with the additional inscription "STADTPOSTBRIEF HAMBURG".

Early in 1869 the stamps were issued with perforation
Perforation
A perforation is a small hole in a thin material or web. There is usually more than one perforation in an organized fashion, where all of the holes are called a perforation...
s, the previous issues having been rouletted. On 1 March, 10 gr and 30 gr values were issued, notable for being printed on goldbeater's skin
Goldbeater's skin
Goldbeater's skin — the outer membrane of calf's intestine — is a parchment traditionally used in the process of making gold leaf by beating, reducing gold into mere 1μm-thick leaves....
, a scheme to prevent reuse of these high-value stamps.

Federation stamps were superseded on 1 January 1872 by the first issues of the German Empire
German Empire
The German Empire refers to Germany during the "Second Reich" period from the unification of Germany and proclamation of Wilhelm I as German Emperor on 18 January 1871, to 1918, when it became a federal republic after defeat in World War I and the abdication of the Emperor, Wilhelm II.The German...
.

The coverage of the North German Postal Union was described as follows:

The federal territories comprise Prussia
Prussia
Prussia was a German kingdom and historic state originating out of the Duchy of Prussia and the Margraviate of Brandenburg. For centuries, the House of Hohenzollern ruled Prussia, successfully expanding its size by way of an unusually well-organized and effective army. Prussia shaped the history...
together with Lauenburg, Saxony
Saxony
The Free State of Saxony is a landlocked state of Germany, contingent with Brandenburg, Saxony Anhalt, Thuringia, Bavaria, the Czech Republic and Poland. It is the tenth-largest German state in area, with of Germany's sixteen states....
, Mecklenburg-Schwerin
Mecklenburg-Schwerin
Mecklenburg-Schwerin was a duchy in northern Germany created in 1348, when Albert II of Mecklenburg and his younger brother John were raised to Dukes of Mecklenburg by King Charles IV...
, Saxe-Weimar
Saxe-Weimar
Saxe-Weimar was one of the Saxon duchies held by the Ernestine branch of the Wettin dynasty in present-day Thuringia. The chief town and capital was Weimar.-Division of Leipzig:...
, Mecklenburg-Strelitz
Mecklenburg-Strelitz
Mecklenburg-Strelitz was a duchy and later grand duchy in northern Germany, consisting of the eastern fifth of the historic Mecklenburg region, roughly corresponding with the present-day Mecklenburg-Strelitz district , and the western exclave of the former Bishopric of Ratzeburg in modern...
, Oldenburg
Oldenburg
Oldenburg is an independent city in Lower Saxony, Germany. It is situated in the western part of the state between the cities of Bremen and Groningen, Netherlands, at the Hunte river. It has a population of 160,279 which makes it the fourth biggest city in Lower Saxony after Hanover, Braunschweig...
, Braunschweig
Braunschweig
Braunschweig , is a city of 247,400 people, located in the federal-state of Lower Saxony, Germany. It is located north of the Harz mountains at the farthest navigable point of the Oker river, which connects to the North Sea via the rivers Aller and Weser....
, Saxe-Meiningen
Saxe-Meiningen
The Duchy of Saxe-Meiningen was one of the Saxon duchies held by the Ernestine line of the Wettin dynasty, located in the southwest of the present-day German state of Thuringia....
, Saxe-Coburg-Gotha
Saxe-Coburg and Gotha
Saxe-Coburg and Gotha or Saxe-Coburg-Gotha served as the collective name of two duchies, Saxe-Coburg and Saxe-Gotha, in Germany. They were located in what today are the states of Bavaria and Thuringia, respectively, and the two were in personal union between 1826 and 1918...
, Anhalt
Anhalt
Anhalt was a sovereign county in Germany, located between the Harz Mountains and the river Elbe in Middle Germany. It now forms part of the state of Saxony-Anhalt.- Dukes of Anhalt :...
, Schwarzburg-Rudolstadt
Schwarzburg-Rudolstadt
Schwarzburg-Rudolstadt was a small historic state in present-day Thuringia, Germany with its capital at Rudolstadt.-History:Schwarzburg-Rudolstadt was established in 1599 in the course of a resettlement of Schwarzburg dynasty lands...
, Schwarzburg-Sondershausen
Schwarzburg-Sondershausen
Schwarzburg-Sondershausen was a small principality in Germany, in the present day state of Thuringia, with capital at Sondershausen.-History:...
, Waldeck
Waldeck (state)
Waldeck was a sovereign principality in the German Empire and German Confederation and, until 1929, a constituent state of the Weimar Republic. It comprised territories in present-day Hesse and Lower Saxony, ....
, Reuß senior line
Reuss Elder Line
The Principality of Reuss Elder Line was a state in Germany, ruled by members of the House of Reuss. The Counts Reuss of Greiz, Lower- and Upper Greiz , were elevated to princely status in 1778. Its members bore the title Prince Reuss, Elder Line, or Prince Reuss of Greiz...
, Reußjunior line, Schaumburg-Lippe
Schaumburg-Lippe
Schaumburg-Lippe was until 1946 a small state in Germany, located in the present day state of Lower Saxony, with its capital at Bückeburg.- History :...
, Lippe
Principality of Lippe
Lippe was a historical state in Germany. It was located between the Weser River and the southeast part of the Teutoburg forest.-History:...
, Lübeck
Lübeck
The Hanseatic City of Lübeck is the second-largest city in Schleswig-Holstein, in northern Germany, and one of the major ports of Germany. It was for several centuries the "capital" of the Hanseatic League and, because of its Brick Gothic architectural heritage, is listed by UNESCO as a World...
, Bremen
Bremen
The City Municipality of Bremen is a Hanseatic city in northwestern Germany. A commercial and industrial city with a major port on the river Weser, Bremen is part of the Bremen-Oldenburg metropolitan area . Bremen is the second most populous city in North Germany and tenth in Germany.Bremen is...
, Hamburg
Hamburg
-History:The first historic name for the city was, according to Claudius Ptolemy's reports, Treva.But the city takes its modern name, Hamburg, from the first permanent building on the site, a castle whose construction was ordered by the Emperor Charlemagne in AD 808...
, and that part of the Grand Duchy of Hesse
Grand Duchy of Hesse
The Grand Duchy of Hesse and by Rhine , or, between 1806 and 1816, Grand Duchy of Hesse —as it was also known after 1816—was a member state of the German Confederation from 1806, when the Landgraviate of Hesse-Darmstadt was elevated to a Grand Duchy, until 1918, when all the German...
that lies to the north of the River Main.