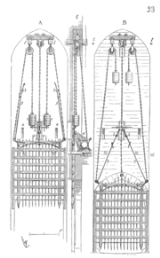 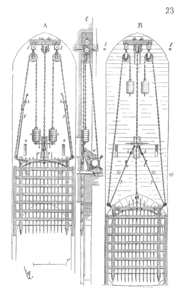 A portcullis is a latticed grille
Grille
A grille or grill is an opening of several slits side by side in a wall or metal sheet or other barrier, usually to let air or water enter and/or leave but keep larger objects including people and animals in or out.-Spelling:In the United States, "grille" is used to differentiate the automotive...
made of wood, metal, fibreglass or a combination of the three. Portcullises fortified the entrances to many medieval castle
Castle
A castle is a type of fortified structure built in Europe and the Middle East during the Middle Ages by European nobility. Scholars debate the scope of the word castle, but usually consider it to be the private fortified residence of a lord or noble...
s, acting as a last line of defence during time of attack or siege
Siege
A siege is a military blockade of a city or fortress with the intent of conquering by attrition or assault. The term derives from sedere, Latin for "to sit". Generally speaking, siege warfare is a form of constant, low intensity conflict characterized by one party holding a strong, static...
. Each portcullis was mounted in vertical grooves in castle walls and could be raised or lowered quickly by means of chain
Chain
A chain is a sequence of connected links.Chain may also refer to:Chain may refer to:* Necklace - a jewelry which is worn around the neck* Mail , a type of armor made of interlocking chain links...
s or rope
Rope
A rope is a length of fibres, twisted or braided together to improve strength for pulling and connecting. It has tensile strength but is too flexible to provide compressive strength...
s attached to an internal winch
Winch
A winch is a mechanical device that is used to pull in or let out or otherwise adjust the "tension" of a rope or wire rope . In its simplest form it consists of a spool and attached hand crank. In larger forms, winches stand at the heart of machines as diverse as tow trucks, steam shovels and...
.

There would often be two portcullises to the main entrance
Gate
A gate is a point of entry to a space enclosed by walls, or a moderately sized opening in a fence. Gates may prevent or control entry or exit, or they may be merely decorative. Other terms for gate include yett and port...
. The one closer to the inside would be closed first and then the one farther away. This was used to trap the enemy and often, burning wood
Wood
Wood is a hard, fibrous tissue found in many trees. It has been used for hundreds of thousands of years for both fuel and as a construction material. It is an organic material, a natural composite of cellulose fibers embedded in a matrix of lignin which resists compression...
or fire-heated sand would be dropped onto them from the roof. Hot oil, however, was not commonly used in this manner, contrary to popular belief, since oil was extremely expensive. There were often arrowslits in the sides of the walls, enabling archers
Archery
Archery is the art, practice, or skill of propelling arrows with the use of a bow, from Latin arcus. Archery has historically been used for hunting and combat; in modern times, however, its main use is that of a recreational activity...
and crossbow
Crossbow
A crossbow is a weapon consisting of a bow mounted on a stock that shoots projectiles, often called bolts or quarrels. The medieval crossbow was called by many names, most of which derived from the word ballista, a torsion engine resembling a crossbow in appearance.Historically, crossbows played a...
men to eliminate the trapped group of attackers.

In England, working portcullises survive at the Tower of London
Tower of London
Her Majesty's Royal Palace and Fortress, more commonly known as the Tower of London, is a historic castle on the north bank of the River Thames in central London, England. It lies within the London Borough of Tower Hamlets, separated from the eastern edge of the City of London by the open space...
, Monk Bar in York, Amberley Castle
Amberley Castle
Amberley Castle is in the village of Amberley, West Sussex . It is a Grade I listed building.It was erected as a 12th century manor house and fortified in 1377...
and Hever Castle
Hever Castle
Hever Castle is located in the village of Hever near Edenbridge, Kent, south-east of London, England. It began as a country house, built in the 13th century...
.

The portcullis was the heraldic badge of the House of Beaufort, and the first Tudor king, Henry VII
Henry VII of England
Henry VII was King of England and Lord of Ireland from his seizing the crown on 22 August 1485 until his death on 21 April 1509, as the first monarch of the House of Tudor....
, who was of matrilineal Beaufort descent, adapted both the portcullis and the Tudor rose
Tudor rose
The Tudor Rose is the traditional floral heraldic emblem of England and takes its name and origins from the Tudor dynasty.-Origins:...
as the Tudor badge. Since then, the portcullis has been a moderately common motif of English heraldry
Heraldry
Heraldry is the profession, study, or art of creating, granting, and blazoning arms and ruling on questions of rank or protocol, as exercised by an officer of arms. Heraldry comes from Anglo-Norman herald, from the Germanic compound harja-waldaz, "army commander"...
, especially that heraldry dating from the Tudor period. The heraldic office of Portcullis Pursuivant of Arms in Ordinary
Portcullis Pursuivant
Portcullis Pursuivant of Arms in Ordinary is a junior officer of arms at the College of Arms in London. The office is named after the Portcullis chained Or badge of the Beauforts, which was a favourite device of King Henry VII. King Henry's mother was Lady Margaret Beaufort. The office was...
, a junior officer of arms
Officer of arms
An officer of arms is a person appointed by a sovereign or state with authority to perform one or more of the following functions:*to control and initiate armorial matters*to arrange and participate in ceremonies of state...
in the College of Arms
College of Arms
The College of Arms, or Heralds’ College, is an office regulating heraldry and granting new armorial bearings for England, Wales and Northern Ireland...
at London
London
London is the capital city of :England and the :United Kingdom, the largest metropolitan area in the United Kingdom, and the largest urban zone in the European Union by most measures. Located on the River Thames, London has been a major settlement for two millennia, its history going back to its...
, dates from this period.

Since then, the portcullis has become the primary symbol of Parliament; an office building for Members of Parliament
Member of Parliament
A Member of Parliament is a representative of the voters to a :parliament. In many countries with bicameral parliaments, the term applies specifically to members of the lower house, as upper houses often have a different title, such as senate, and thus also have different titles for its members,...
, opened in 2001, is named "Portcullis House
Portcullis House
Portcullis House is an office building in Westminster, London, UK, that was commissioned in 1992 and opened in 2001 to provide offices for 213 Members of Parliament and their staff, augmenting limited space in the Palace of Westminster and surroundings....
". During the 20th century, use of the portcullis as a symbol of Parliament spread beyond Britain and to the other Commonwealth realm
Commonwealth Realm
A Commonwealth realm is a sovereign state within the Commonwealth of Nations that has Elizabeth II as its monarch and head of state. The sixteen current realms have a combined land area of 18.8 million km² , and a population of 134 million, of which all, except about two million, live in the six...
s; for instance, the coat of arms
Coat of arms of Canberra
The coat of arms of Canberra was created by the Commonwealth Department of Home Affairs and Territories in 1927, in response to a request by the Commonwealth Department of Defence, who wanted to use it on the newly commissioned HMAS Canberra....
of Canberra
Canberra
Canberra is the capital city of Australia. With a population of over 345,000, it is Australia's largest inland city and the eighth-largest city overall. The city is located at the northern end of the Australian Capital Territory , south-west of Sydney, and north-east of Melbourne...
features a portcullis in its crest
Crest (heraldry)
A crest is a component of an heraldic display, so called because it stands on top of a helmet, as the crest of a jay stands on the bird's head....
, consciously preserving a connection between the British Parliament at Westminster and the Australian Parliament
Parliament of Australia
The Parliament of Australia, also known as the Commonwealth Parliament or Federal Parliament, is the legislative branch of the government of Australia. It is bicameral, largely modelled in the Westminster tradition, but with some influences from the United States Congress...
to which Canberra is home.

The portcullis may appear:


It is often shown with chains attached, even when the blazon does not mention them.