Encyclopedia
The Port of Klaipėda is a seaport located in Klaipėda
Klaipeda
Klaipėda is a city in Lithuania situated at the mouth of the Nemunas River where it flows into the Baltic Sea. It is the third largest city in Lithuania and the capital of Klaipėda County....
, Lithuania
Lithuania
Lithuania , officially the Republic of Lithuania is a country in Northern Europe, the biggest of the three Baltic states. It is situated along the southeastern shore of the Baltic Sea, whereby to the west lie Sweden and Denmark...
. It is one of the few ice-free ports in northernmost Europe, and the largest in Lithuania. It serves as a port of call for cruise ships as well as freight transport.

The city of Klaipėda has been involved in maritime trade since as early as the 13th century, and probably during prehistoric times, since it is located on the Amber Road
Amber Road
The Amber Road was an ancient trade route for the transfer of amber. As one of the waterways and ancient highways, for centuries the road led from Europe to Asia and back, and from northern Africa to the Baltic Sea....
. For several centuries its administration and its merchants defended the port and competed with the Port of Danzig
Port of Gdansk
The Port of Gdańsk is a seaport located on the southern coast of Gdańsk Bay in the city of Gdańsk, extending along the Vistula estuary Martwa Wisła , Port Channel and Kashubia Canal. It is one of the largest seaports on the Baltic Sea....
and the Port of Königsberg
Königsberg
Königsberg was the capital of East Prussia from the Late Middle Ages until 1945 as well as the northernmost and easternmost German city with 286,666 inhabitants . Due to the multicultural society in and around the city, there are several local names for it...
. It was heavily fortified. At the beginning of the 19th century the port was transferred to the jurisdiction of the Ministry of Transport of the Republic of Lithuania. Before World War I
World War I
World War I , which was predominantly called the World War or the Great War from its occurrence until 1939, and the First World War or World War I thereafter, was a major war centred in Europe that began on 28 July 1914 and lasted until 11 November 1918...
, the major cargo was timber. During the 20th century, mineral and cellulose enterprises were established in Lithuania, and became port commodities. Infrastructures supporting the fishing and shipbuilding industries were also built.

In 1991, after Lithuanian independence was declared, the Klaipėda State Seaport Authority was founded. It administers the port and supports its integration into the larger scheme of Lithuanian transport. The Port Authority is responsible for the maintenance, reconstruction and modernisation of the port infrastructure, while loading and unloading operations are managed by separate independent terminals. The port's land and infrastructure belong to the state, but some privatisization is underway.

The Port of Klaipėda is the most northerly ice-free port in the Eastern part of the Baltic Sea. The port can accommodate ships of up to 250 meters in length with draughts of up to 13.5 meters.
The port is served by two railway stations, and highways link Klaipėda to Moscow
Moscow
Moscow is the capital, the most populous city, and the most populous federal subject of Russia. The city is a major political, economic, cultural, scientific, religious, financial, educational, and transportation centre of Russia and the continent...
via Kaunas
Kaunas
Kaunas is the second-largest city in Lithuania and has historically been a leading centre of Lithuanian economic, academic, and cultural life. Kaunas was the biggest city and the center of a powiat in Trakai Voivodeship of the Grand Duchy of Lithuania since 1413. During Russian Empire occupation...
, Vilnius
Vilnius
Vilnius is the capital of Lithuania, and its largest city, with a population of 560,190 as of 2010. It is the seat of the Vilnius city municipality and of the Vilnius district municipality. It is also the capital of Vilnius County...
, and Minsk
Minsk
- Ecological situation :The ecological situation is monitored by Republican Center of Radioactive and Environmental Control .During 2003–2008 the overall weight of contaminants increased from 186,000 to 247,400 tons. The change of gas as industrial fuel to mazut for financial reasons has worsened...
.

In 1997, 16.13 million tons of cargo were handled at the port, increasing to over 31 million tons in 2010. About 321,000 international passengers transhipped the port of Klaipėda in 2010, on ferries servicing Kiel
Kiel
Kiel is the capital and most populous city in the northern German state of Schleswig-Holstein, with a population of 238,049 .Kiel is approximately north of Hamburg. Due to its geographic location in the north of Germany, the southeast of the Jutland peninsula, and the southwestern shore of the...
and Mukran in Germany, Abus in Sweden, and Copenhagen
Copenhagen
Copenhagen is the capital and largest city of Denmark, with an urban population of 1,199,224 and a metropolitan population of 1,930,260 . With the completion of the transnational Øresund Bridge in 2000, Copenhagen has become the centre of the increasingly integrating Øresund Region...
and Fredericia
Fredericia
Fredericia is a town located in Fredericia municipality in the eastern part of the Jutland peninsula in Denmark, in a sub-region known locally as Trekanten, or The Triangle...
in Denmark. The port of Klaipėda is also the leading port among the Baltics by handling of containers (314 th. of TEU in 2010).

The World Bank
World Bank
The World Bank is an international financial institution that provides loans to developing countries for capital programmes.The World Bank's official goal is the reduction of poverty...
is sponsoring improvements at the port:
The following table is a snapshot of ships within the port on December 9, 2006. 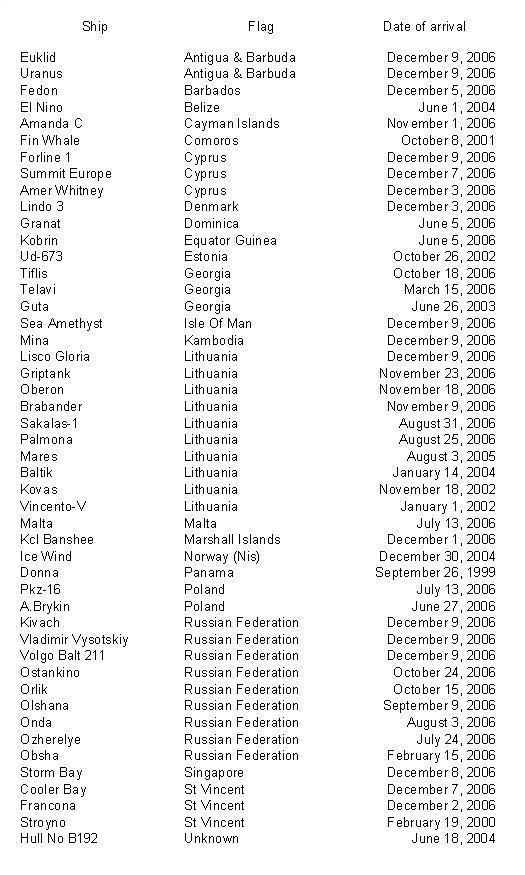