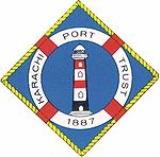 Overview
The Port of Karachi is Pakistan
Pakistan
Pakistan , officially the Islamic Republic of Pakistan is a sovereign state in South Asia. It has a coastline along the Arabian Sea and the Gulf of Oman in the south and is bordered by Afghanistan and Iran in the west, India in the east and China in the far northeast. In the north, Tajikistan...
's largest and busiest seaport
Port
A port is a location on a coast or shore containing one or more harbors where ships can dock and transfer people or cargo to or from land....
, handling about 60% of the nation's cargo (25 million tons per annum). It is located between the Karachi
Karachi
Karachi is the largest city, main seaport and the main financial centre of Pakistan, as well as the capital of the province of Sindh. The city has an estimated population of 13 to 15 million, while the total metropolitan area has a population of over 18 million...
towns of Kiamari
Kiamari Town
Kiamari Town is the main coastal town of Karachi, located in the central and western parts of the city, including the Port of Karachi and an extensive coastline with sandy beaches, small islands and mangrove forests. It does not include the southern island of Manora which is under cantonment...
and Saddar
Saddar Town
Saddar Town is a town in the central part of Karachi, Sindh, Pakistan. The word Saddar generally means the “centre” and also “head” . The town is bordered by Jamshed Town and Clifton Cantonment to the east, Kiamari Town and the Arabian Sea to the south and Lyari Town to the west...
, close to the main business district and several industrial areas. The geographic position of the port places it in close proximity to major shipping routes such as the Strait of Hormuz
Strait of Hormuz
The Strait of Hormuz is a narrow, strategically important waterway between the Gulf of Oman in the southeast and the Persian Gulf. On the north coast is Iran and on the south coast is the United Arab Emirates and Musandam, an exclave of Oman....
. The administration of the port is carried out by the Karachi Port Trust
Karachi Port Trust
Karachi Port Trust is a Pakistani federal government agency that oversees the operations of the Port of Karachi in Karachi, Sindh, Pakistan.-History:...
, which was established in the nineteenth century.
The history of the port is intertwined with that of the city of Karachi.