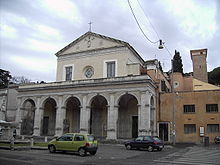 Santa Maria in Domnica — also known as Santa Maria alla Navicella — is a basilica
Basilica
The Latin word basilica , was originally used to describe a Roman public building, usually located in the forum of a Roman town. Public basilicas began to appear in Hellenistic cities in the 2nd century BC.The term was also applied to buildings used for religious purposes...
church in
Churches of Rome
There are more than 900 churches in Rome. Most, but not all, of these are Roman Catholic, with some notable Roman Catholic Marian churches.The first churches of Rome originated in places where Christians met. They were divided into three categories:...
Rome
Rome
Rome is the capital of Italy and the country's largest and most populated city and comune, with over 2.7 million residents in . The city is located in the central-western portion of the Italian Peninsula, on the Tiber River within the Lazio region of Italy.Rome's history spans two and a half...
.

The church was built in ancient times, close to the Vigiles 5th cohort's barracks. The church was built no later than the 7th century. Pope Paschal I
Pope Paschal I
Pope Saint Paschal I was pope from January 25, 817 to February 11, 824. A native of Rome and son of Bonosus, he was raised to the pontificate by the acclamation of the clergy, shortly after the death of Pope Stephen IV, and before the sanction of the emperor Louis the Pious had been obtained - a...
, credited for Rome's early 9th century age of renovation and artistic splendour, had the church rebuilt in 818-822, providing it with noteworthy mosaic decoration.

The attribute "in Domnica" has been differently explained. One interpretation is the derivation from dominicum, meaning "of the Lord", and by extension "church". Another interpretation refers to the name of Cyriaca
Cyriaca
Cyriaca, also known as Dominica, was a Roman widow, and patroness to St. Lawrence, and eventually suffered martyrdom. St. Lawrence, used her home in Rome, to give food to the poor. Cyriaca suffered martyrdom, through flagellation....
, a woman who lived nearby, and whose name means "belonging to the Lord", Dominica in Latin.. The attribute "alla Navicella" means "near the little ship", and refers to the Roman ship sculpture that has been in front of the church for a long time, and Pope Leo X
Pope Leo X
Pope Leo X , born Giovanni di Lorenzo de' Medici, was the Pope from 1513 to his death in 1521. He was the last non-priest to be elected Pope. He is known for granting indulgences for those who donated to reconstruct St. Peter's Basilica and his challenging of Martin Luther's 95 Theses...
had turned into a fountain.

The Cardinal Deacon of the Titulus S. Mariae in Domnica is William Joseph Levada.

Pope Leo X
Pope Leo X
Pope Leo X , born Giovanni di Lorenzo de' Medici, was the Pope from 1513 to his death in 1521. He was the last non-priest to be elected Pope. He is known for granting indulgences for those who donated to reconstruct St. Peter's Basilica and his challenging of Martin Luther's 95 Theses...
renovated the church in 1513-14, Andrea Sansovino
Andrea Sansovino
Andrea dal Monte Sansovino or Andrea Contucci del Monte San Savino was an Italian sculptor active during the High Renaissance...
directing the works and including the facade portico with tuscan columns. The internal columns are recycled from an ancient temple and crowned with Corinthian capitals. The ceiling is frescoed by Perin del Vaga
Perin del Vaga
Perino del Vaga was an Italian painter of the Late Renaissance/Mannerism.-Biography:...
, based on designs of Giulio Romano
Giulio Romano
Giulio Romano was an Italian painter and architect. A pupil of Raphael, his stylistic deviations from high Renaissance classicism help define the 16th-century style known as Mannerism...
. The apse mosaid from the 8th century depicts Christ, angels, and apostles, Moses and Elias, Virgin and child on throne, and Pasquale I in ginocchio. There are also frescoes by Lazzaro Baldi
Lazzaro Baldi
Lazzaro Baldi was an Italian painter of the Baroque period, active mainly in Rome.-Biography:Baldi was born in Pistoia and died in Rome. He was part of the large studio of Pietro da Cortona, and became adept at fresco technique. He painted a David and Goliath for Alexander VII in the Palazzo...
.
The source of this article is wikipedia, the free encyclopedia.  The text of this article is licensed under the GFDL.