Encyclopedia
Ponte Vedra Beach is an unincorporated
Unincorporated area
In law, an unincorporated area is a region of land that is not a part of any municipality.To "incorporate" in this context means to form a municipal corporation, a city, town, or village with its own government. An unincorporated community is usually not subject to or taxed by a municipal government...
seaside community in St. Johns County
St. Johns County, Florida
St. Johns County is a county located in northeastern Florida. As of the 2010 census, the population was 190,039. The county seat is St. Augustine. Due to the inclusion of Ponte Vedra Beach, it is one of the highest-income counties in the United States....
, Florida
Florida
Florida is a state in the southeastern United States, located on the nation's Atlantic and Gulf coasts. It is bordered to the west by the Gulf of Mexico, to the north by Alabama and Georgia and to the east by the Atlantic Ocean. With a population of 18,801,310 as measured by the 2010 census, it...
, United States
United States
The United States of America is a federal constitutional republic comprising fifty states and a federal district...
. Located eighteen miles (29 km) southeast of downtown Jacksonville
Jacksonville, Florida
Jacksonville is the largest city in the U.S. state of Florida in terms of both population and land area, and the largest city by area in the contiguous United States. It is the county seat of Duval County, with which the city government consolidated in 1968...
and 26 miles (41.8 km) north of St. Augustine
St. Augustine, Florida
St. Augustine is a city in the northeast section of Florida and the county seat of St. Johns County, Florida, United States. Founded in 1565 by Spanish explorer and admiral Pedro Menéndez de Avilés, it is the oldest continuously occupied European-established city and port in the continental United...
, it is part of the Jacksonville Beaches
Jacksonville Beaches
The Jacksonville Beaches, known locally as the "Beaches" or simply the "Beach", is the collective name for the towns and communities on the northern half of an unnamed barrier island on Florida's First Coast, all of which are suburbs or parts of the city of Jacksonville. These communities are...
area. It is an upmarket tourist resort area best known for its association with golf
Golf
Golf is a precision club and ball sport, in which competing players use many types of clubs to hit balls into a series of holes on a golf course using the fewest number of strokes....
. The Sawgrass
Sawgrass, Florida
Sawgrass is a census-designated place in St. Johns County, Florida, United States. The population was 4,942 at the 2000 census. The aura is located in one of the most prestigious region of Florida, Ponte Vedra Beach.-Geography:...
development is the home of the ATP Tour, the PGA Tour
PGA Tour
The PGA Tour is the organizer of the main men's professional golf tours in the United States and North America...
, and The Players Championship
The Players Championship
The Players Championship is an annual golf tournament on the PGA Tour.Originally known as the Tournament Players Championship, the inaugural event in 1974 was played at Atlanta Country Club in Marietta, Georgia before moving to the Colonial Country Club in Fort Worth, Texas in 1975 and Inverrary...
, played at the TPC at Sawgrass
TPC at Sawgrass
The Tournament Players Club at Sawgrass, colloquially known as TPC at Sawgrass, is a well-known golf course in Ponte Vedra Beach, Florida, a suburb of Jacksonville. Opened in 1980, it was the first of several Tournament Players Clubs to be built...
.

The area is known for its resorts including the Ponte Vedra Inn and Club
Ponte Vedra Inn and Club
The Ponte Vedra Inn & Club, located at Ponte Vedra Beach, Florida, is a AAA Five Diamond Award resort and the first country club at Ponte Vedra. The 9th hole on the Ocean course has the distinction of having the first island green ever built.-History:...
(a AAA
American Automobile Association
AAA , formerly known as the American Automobile Association, is a federation of 51 independently operated motor clubs throughout North America. AAA is a not-for-profit member service organization with more than 51 million members. AAA provides services to its members such as travel, automotive,...
five diamond resort), the Lodge and Club (four diamonds), and the Marriott at Sawgrass (three diamonds). It also lies in the third wealthiest county in Florida, ranking just behind the Palm Beach
Palm Beach, Florida
The Town of Palm Beach is an incorporated town in Palm Beach County, Florida, United States. The Intracoastal Waterway separates it from the neighboring cities of West Palm Beach and Lake Worth...
and Naples
Naples, Florida
Naples is a city in Collier County, Florida, United States. As of July 1, 2007, the U.S. Census Bureau estimated the city's population at 21,653. Naples is a principal city of the Naples–Marco Island Metropolitan Statistical Area, which had an estimated total population of 315,839 on July 1, 2007...
areas. Ponte Vedra Beach is affectionately known as the Palm Beach of North Florida. 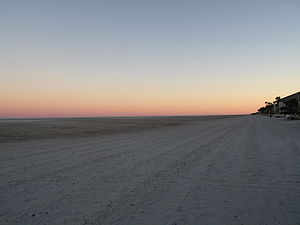 What is now North Florida was visited several times by European explorers in the 16th century, but there is little evidence for them coming to Ponte Vedra Beach specifically. It may have been sighted by Juan Ponce de Leon
Juan Ponce de León
Juan Ponce de León was a Spanish explorer. He became the first Governor of Puerto Rico by appointment of the Spanish crown. He led the first European expedition to Florida, which he named...
during his voyage to Florida in 1513, but as his precise landfall is unknown, this claim may be made by many communities on the east coast of Florida.

The area remained sparsely populated through the late 19th century, even as other seaside communities began to develop to the north. In 1914 minerals were discovered, and a community known as Mineral City grew up around the mining operations there. Titanium (ilmenite
Ilmenite
Ilmenite is a weakly magnetic titanium-iron oxide mineral which is iron-black or steel-gray. It is a crystalline iron titanium oxide . It crystallizes in the trigonal system, and it has the same crystal structure as corundum and hematite....
) extraction was significant, as well as that of zircon
Zircon
Zircon is a mineral belonging to the group of nesosilicates. Its chemical name is zirconium silicate and its corresponding chemical formula is ZrSiO4. A common empirical formula showing some of the range of substitution in zircon is 1–x4x–y...
and rutile
Rutile
Rutile is a mineral composed primarily of titanium dioxide, TiO2.Rutile is the most common natural form of TiO2. Two rarer polymorphs of TiO2 are known:...
. These minerals were recovered from beach sands by a private commercial firm called National Lead Company, directed by Henry Holland Buckman
Henry Holland Buckman
Henry Holland Buckman was an attorney from Duval County, Florida, who became a legislator in the Florida Legislature and served on the Judiciary Committee...
and George A. Pritchard. During World War I
World War I
World War I , which was predominantly called the World War or the Great War from its occurrence until 1939, and the First World War or World War I thereafter, was a major war centred in Europe that began on 28 July 1914 and lasted until 11 November 1918...
titanium was a component of poison gas, and therefore a strategic mineral.

After the war, mineral demand dropped, so the National Lead Company changed its focus to building a resort community. The name of the community was changed to Ponte Vedra, apparently after the city of Pontevedra
Pontevedra
Pontevedra is a city in the north-west of the Iberian Peninsula. It is the capital of both the comarca and province of Pontevedra, in Galicia . It is also the capital of its own municipality which is, in fact, often considered as an extension of the actual city...
, Galicia, (Spain
Spain
Spain , officially the Kingdom of Spain languages]] under the European Charter for Regional or Minority Languages. In each of these, Spain's official name is as follows:;;;;;;), is a country and member state of the European Union located in southwestern Europe on the Iberian Peninsula...
). The actual reason is unknown, but there was a rumor that one of the developers read a newspaper article that erroneously claimed Christopher Columbus
Christopher Columbus
Christopher Columbus was an explorer, colonizer, and navigator, born in the Republic of Genoa, in northwestern Italy. Under the auspices of the Catholic Monarchs of Spain, he completed four voyages across the Atlantic Ocean that led to general European awareness of the American continents in the...
was born there. 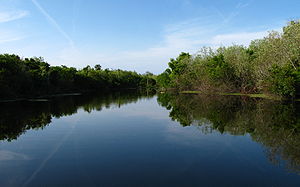 During World War II
World War II
World War II, or the Second World War , was a global conflict lasting from 1939 to 1945, involving most of the world's nations—including all of the great powers—eventually forming two opposing military alliances: the Allies and the Axis...
the German submarine U-584 debarked four saboteurs at Ponte Vedra as part of the failed Operation Pastorius
Operation Pastorius
Operation Pastorius was a failed plan for sabotage via a series of attacks by Nazi German agents inside the United States. The operation was staged in June 1942 and was to be directed against strategic U.S. economic targets...
. The four German spies, all of whom had previously lived in the United States, came ashore on the night of June 16, 1942 carrying explosives and American money. After landing they strolled up the beach to Jacksonville Beach, where they caught a city bus to Jacksonville and departed by train for Cincinnati and Chicago
Chicago
Chicago is the largest city in the US state of Illinois. With nearly 2.7 million residents, it is the most populous city in the Midwestern United States and the third most populous in the US, after New York City and Los Angeles...
. The invaders were captured before they could do any damage. They were tried by a military tribunal and executed.

In 1972 developers broke ground on the 1100 acres (4.5 km²) Sawgrass development. Around the same time, Deane Beman, the Commissioner of the PGA Tour, was looking for a permanent home for the Tournament Players Championship. Many areas around North Florida were considered. In an attempt to bring positive attention to the area the Sawgrass developers offered a 400 acres (1.6 km²) tract of land to Deane for only $1. He couldn't refuse this One Dollar Deal and so Sawgrass became the home of the Tournament Players Championship and the headquarters for the PGA Tour.

Median household income in Ponte Vedra Beach is $82,688, and median family income is $109,181. The population (including surrounding areas) in 2005 was given as 35,400. The Ponte vedra area in known for being a very influential area of North Florida, and boasts one of the best school districts in Florida. Ponte Vedra Beach was 50th on the list of 100 finalists for CNN and Money Magazine's 2005 List of the Best Places to Live. It was the first place in Florida to be named in that year and one of only four areas in the state to make the cut.

Famous past and present residents of Ponte Vedra: