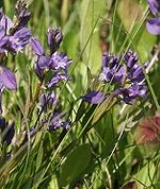 Encyclopedia
Polygala is a genus of about 500 species of flowering plant
Flowering plant
The flowering plants , also known as Angiospermae or Magnoliophyta, are the most diverse group of land plants. Angiosperms are seed-producing plants like the gymnosperms and can be distinguished from the gymnosperms by a series of synapomorphies...
s belonging to the family Polygalaceae
Polygalaceae
The Polygalaceae or Milkwort family is a family of flowering plants in the order Fabales. They have a near-cosmopolitan range, with about 17 genera and 900–1,000 species of herbs, shrubs and trees...
, commonly known as milkwort or snakeroot. The genus includes herbaceous
Herbaceous
A herbaceous plant is a plant that has leaves and stems that die down at the end of the growing season to the soil level. They have no persistent woody stem above ground...
perennial plant
Perennial plant
A perennial plant or simply perennial is a plant that lives for more than two years. The term is often used to differentiate a plant from shorter lived annuals and biennials. The term is sometimes misused by commercial gardeners or horticulturalists to describe only herbaceous perennials...
s, shrub
Shrub
A shrub or bush is distinguished from a tree by its multiple stems and shorter height, usually under 5–6 m tall. A large number of plants may become either shrubs or trees, depending on the growing conditions they experience...
s and small tree
Tree
A tree is a perennial woody plant. It is most often defined as a woody plant that has many secondary branches supported clear of the ground on a single main stem or trunk with clear apical dominance. A minimum height specification at maturity is cited by some authors, varying from 3 m to...
s, and has a subcosmopolitan
Cosmopolitan distribution
In biogeography, a taxon is said to have a cosmopolitan distribution if its range extends across all or most of the world in appropriate habitats. For instance, the killer whale has a cosmopolitan distribution, extending over most of the world's oceans. Other examples include humans, the lichen...
distribution.

Polygala species are used as food plants by the larva
Larva
A larva is a distinct juvenile form many animals undergo before metamorphosis into adults. Animals with indirect development such as insects, amphibians, or cnidarians typically have a larval phase of their life cycle...
e of some Lepidoptera
Lepidoptera
Lepidoptera is a large order of insects that includes moths and butterflies . It is one of the most widespread and widely recognizable insect orders in the world, encompassing moths and the three superfamilies of butterflies, skipper butterflies, and moth-butterflies...
species including Large Grizzled Skipper
Large Grizzled Skipper
The Large Grizzled Skipper is a species of skipper . It is distributed throughout most of continental Europe but is absent from Denmark and practically all European islands including Great Britain, Ireland, Azores, Balearic Islands, Channel Islands, Canary Islands, Crete, Cyprus, Iceland, etc.This...
.