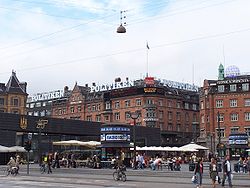 Politiken is a Danish
Denmark
Denmark is a Scandinavian country in Northern Europe. The countries of Denmark and Greenland, as well as the Faroe Islands, constitute the Kingdom of Denmark . It is the southernmost of the Nordic countries, southwest of Sweden and south of Norway, and bordered to the south by Germany. Denmark...
daily broadsheet
Broadsheet
Broadsheet is the largest of the various newspaper formats and is characterized by long vertical pages . The term derives from types of popular prints usually just of a single sheet, sold on the streets and containing various types of material, from ballads to political satire. The first broadsheet...
newspaper, published by JP/Politikens Hus
JP/Politikens Hus
JP/Politikens Hus A/S is a Danish media company. It was established on January 1, 2003 as a merger of the publishing companies of the major broadsheet newspapers Jyllands-Posten and Politiken as well as Politikens tabloid Ekstra Bladet...
.

The newspaper comes third among Danish newspapers in terms of both number of readers and circulated copies (free dailies excluded).

The newspaper also publishes an international edition named Politiken Weekly which compiles the most important stories of a week for Danes living abroad.

Politiken relaunched itself on its birthday 1 October 2006 keeping the broadsheet format but splitting most pages horizontally into "overview" (the upper 20-25 percent of a broadsheet page) and "depth" (rest of the page).

The depth part provides more analytical, investigative and feature-like articles that tend to be longer and more carefully presented than traditional newspaper articles. The overview part is partly produced by the papers online desk Politiken.dk and summarizes events of the latest 24 hours. The idea is to present a more distinctive and sharper selection of stories without losing the broad coverage of a traditional paper.

Internationally, Politiken is widely respected for its often creative design for which it has won several awards. In 2007 Politiken along with four other newspapers were declared the World's Best-Designed among 394 newspapers in a competition carried out by Society for News Design.

Also, Politiken has been known for its photography. Jan Grarup
Jan Grarup
Jan Grarup is a Danish photojournalist who has worked both as a staff photographer and as a freelance, specializing in war and conflict photography. He has won many prizes including the World Press Photo award for his coverage of the war in Kosovo....
, winner of several World Press Photo Awards and numerous other prizes, was a staff photographer from 2003 until 2009.

Dagbladet Politiken (The Daily Politiken) was founded on 1 October 1884 in Copenhagen
Copenhagen
Copenhagen is the capital and largest city of Denmark, with an urban population of 1,199,224 and a metropolitan population of 1,930,260 . With the completion of the transnational Øresund Bridge in 2000, Copenhagen has become the centre of the increasingly integrating Øresund Region...
by Viggo Hørup
Viggo Hørup
Viggo Lauritz Bentheim Hørup , was a Danish politician, journalist and agitator.He was the father to Ellen Hørup .One of the most influential politicians of the Danish non-Socialist left wing....
, Edvard Brandes
Edvard Brandes
Carl Edvard Cohen Brandes was a Danish politician, critic and author, and the younger brother of Georg Brandes and Ernst Brandes. He was a Ph.D. in eastern philology....
and Hermann Bing. The foundation came about after Hørup and Brandes had been fired as editors from the newspaper Morgenbladet over political differences. Politiken started with daily circulation of 2,000 copies.

Politiken established its present location in central Copenhagen at The City Hall Square in 1912.

On 28 April 1940, three weeks after the German invasion of Denmark, Politiken ran an editorial in which Winston Churchill
Winston Churchill
Sir Winston Leonard Spencer-Churchill, was a predominantly Conservative British politician and statesman known for his leadership of the United Kingdom during the Second World War. He is widely regarded as one of the greatest wartime leaders of the century and served as Prime Minister twice...
was called ‘a dangerous man’. The editorial was written by foreign affairs editor Einard Schou after a conversation in the editor-in-chief's office with chairman of the board and soon-to-be-again Danish foreign minister Erik Scavenius
Erik Scavenius
Erik Julius Christian Scavenius was the Danish foreign minister 1909–1910, 1913–1920 and 1940–1943, and prime minister from 1942 to 1943. His cabinet resigned in 1943 and suspended operations...
. The aim is thought to have been to please the German occupational force, though no other Danish newspaper took such steps at the time — usually it was enough to keep within the newly-introduced censorship. As an immediate result, thousands of readers cancelled their subscriptions in protest.

Historically Politiken was connected to the Danish Social Liberal Party (Det Radikale Venstre
Det Radikale Venstre
The Danish Social Liberal Party is a social liberal political party in Denmark. The party is a member of Liberal International and the European Liberal Democrat and Reform Party.-Origin:...
), but the newspaper declared its political independence in 1970. Interestingly the newspaper is older than the party, making this a rare case of a newspaper starting a party rather than a party starting a newspaper.

In February 2010 the editor in chief at the time Tøger Seidenfaden
Tøger Seidenfaden
Tøger Seidenfaden was a Danish journalist and political scientist, and, from 1993 until his death, editor-in-chief of the broadsheet newspaper Politiken. His father, Erik Seidenfaden, was also a journalist....
apologized to anyone who was offended by the newspaper's decision to reprint the Cartoon Drawing by Kurt Westergaard, depicting Muhammed with a bomb in his turban, which was originally published in Morgenavisen Jyllands-Posten. Seidenfaden explained that "Politiken has never intended to reprint the Cartoon Drawing as a statement of editorial opinion or values but merely as part of the newspaper's news coverage".

Cavlingprisen ("The Cavling Award") is a Danish honorary award for journalism. It was named after a former reporter and editor-in-chief at Politiken Henrik Cavling.

In some periods there were more than one, which is why some overlap each other.