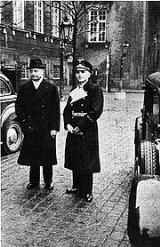 Encyclopedia
Erik Julius Christian Scavenius (13 July 1877 – 29 November 1962) was the Danish
Denmark
Denmark is a Scandinavian country in Northern Europe. The countries of Denmark and Greenland, as well as the Faroe Islands, constitute the Kingdom of Denmark . It is the southernmost of the Nordic countries, southwest of Sweden and south of Norway, and bordered to the south by Germany. Denmark...
foreign minister 1909–1910, 1913–1920 and 1940–1943, and prime minister from 1942 to 1943. His cabinet resigned in 1943 and suspended operations. The resignation was never formally accepted by the King
Christian X of Denmark
Christian X was King of Denmark from 1912 to 1947 and the only King of Iceland between 1918 and 1944....
so the cabinet existed de jure until a new one was formed following the Liberation of Denmark
Occupation of Denmark
Nazi Germany's occupation of Denmark began with Operation Weserübung on 9 April 1940, and lasted until German forces withdrew at the end of World War II following their surrender to the Allies on 5 May 1945. Contrary to the situation in other countries under German occupation, most Danish...
on 5 May 1945. Scavenius was a member of the Landsting
Landsting (Denmark)
The Landsting was a house of the Rigsdag in Denmark from 1849 until 1953, when the bicameral system was abolished. The house had powers equal to the Folketing, which made the two houses of parliament hard to distinguish....
1918–1920 and 1925–1927 representing the Social Liberal Party
Det Radikale Venstre
The Danish Social Liberal Party is a social liberal political party in Denmark. The party is a member of Liberal International and the European Liberal Democrat and Reform Party.-Origin:...
. He was chairman of its party organization 1922–1924.

The Scavenius family belongs to the Danish nobility
Nobility
Nobility is a social class which possesses more acknowledged privileges or eminence than members of most other classes in a society, membership therein typically being hereditary. The privileges associated with nobility may constitute substantial advantages over or relative to non-nobles, or may be...
. It was family tradition to work as a diplomat
Diplomacy
Diplomacy is the art and practice of conducting negotiations between representatives of groups or states...
. Erik Scavenius graduated in economics
Economics
Economics is the social science that analyzes the production, distribution, and consumption of goods and services. The term economics comes from the Ancient Greek from + , hence "rules of the house"...
in 1901. Soon after, he became employed in the Danish Ministry of Foreign Affairs. He was a secretary at the Danish Embassy in Berlin 1906–1908, a time forming his emphasis upon the primacy of Danish-German relations. Next, he became head of section in the ministry. He was an envoy to Vienna and Rome 1912–13 and to Stockholm 1924–32. From 1932 to 1940 he was chairman of the board of the major daily Politiken
Politiken
Politiken is a Danish daily broadsheet newspaper, published by JP/Politikens Hus.The newspaper comes third among Danish newspapers in terms of both number of readers and circulated copies ....
. Scavenius was the owner of a large estate 1915-1946. After 1945 he experienced personal and economic difficulties.

The appointment of the only 32 year old head of section Scavenius as minister of Foreign Affairs in the Social Liberal cabinet 1909–10 came as a surprise. He was reappointed when the party formed another cabinet 1913. During World War I
World War I
World War I , which was predominantly called the World War or the Great War from its occurrence until 1939, and the First World War or World War I thereafter, was a major war centred in Europe that began on 28 July 1914 and lasted until 11 November 1918...
he strongly put his efforts into the continuation of "the German course", a policy of keeping Denmark out of conflict with the neighbouring great power
Great power
A great power is a nation or state that has the ability to exert its influence on a global scale. Great powers characteristically possess military and economic strength and diplomatic and cultural influence which may cause small powers to consider the opinions of great powers before taking actions...
through adaptation of its demands. Among other things he supported giving in to mining of the Danish straits
Danish straits
The Danish straits are the three channels connecting the Baltic Sea to the North Sea through the Kattegat and Skagerrak. They transect Denmark, and are not to be confused with the Denmark Strait between Greenland and Iceland...
in August 1914. 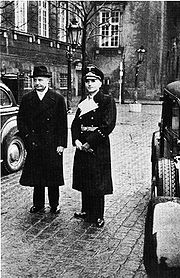 Erik Scavenius became foreign minister again during most of the German occupation of Denmark
Occupation of Denmark
Nazi Germany's occupation of Denmark began with Operation Weserübung on 9 April 1940, and lasted until German forces withdrew at the end of World War II following their surrender to the Allies on 5 May 1945. Contrary to the situation in other countries under German occupation, most Danish...
. As such he was the most important liaison between the Danish government and the German authorities. In addition he was prime minister for some of the war as head of a coalition cabinet after the Telegram Crisis
Telegram Crisis
The Telegram Crisis was a diplomatic crisis between Denmark and Germany in October–November 1942 during the German occupation of Denmark....
. He was more of a professional diplomat than an elected politician, and he held an elitist approach to government. At this time, the Social Liberal Party did not consider Scavenius to be a representative of it, even though the party accepted his line along with the other coalition parties.

Scavenius was very afraid that emotional public opinion would destabilize his attempts to build a compromise between Danish sovereignty and the realities of occupation. He felt strongly that he was Denmark's most ardent defender. After the war there was much recrimination of his stance, particularly from members of the active resistance
Danish resistance movement
The Danish resistance movement was an underground insurgency movement to resist the German occupation of Denmark during World War II. Due to the unusually lenient terms given to Danish people by the Nazi occupation authority, the movement was slower to develop effective tactics on a wide scale...
who felt that he had hindered the cause of resistance and threatened Denmark's national honour. He felt that these people were vain, seeking to build their own reputations or political careers through emotionalism
Emotionalism
Emotionalism, in its meaning as a research paradigm, refers to an approach to conducting research studies that provides a gateway to understanding people's experiences through the use of social inquiry methodologies such as ethnography....
.

After 29 August 1943, Erik Scavenius lost all of his real powers when the German authorities dissolved the Danish government following the refusal of that government to crack down on unrest to the satisfaction of the German plenipotentiary.

Debate continues over Scavenius' legacy. For example, on the 60th anniversary of the 29 August dissolution of government, prime minister Anders Fogh Rasmussen
Anders Fogh Rasmussen
Anders Fogh Rasmussen is a Danish politician, and the 12th and current Secretary General of NATO. Rasmussen served as Prime Minister of Denmark from 27 November 2001 to 5 April 2009....
chastised his predecessor for his stance, saying that it was naive and morally unacceptable. However, historians like Bo Lidegaard
Bo Lidegaard
Bo Lidegaard is a Danish historian, diplomat, and editor in chief of daily broadsheet newspaper Politiken.He is the son of authors Mads Lidegaard and Else Lidegaard. Bo Lidegaard graduated from Gentofte Statsskole in 1976, and became cand. phil. in history at the University of Copenhagen in 1984....
and Søren Mørch contend that it was only through Scavenius' policies that Denmark escaped the worst hardships of the war.