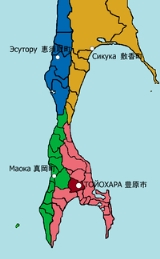 Encyclopedia
Between 1905 and 1945, the Japanese Empire administered the southern half of Sakhalin
Sakhalin
Sakhalin or Saghalien, is a large island in the North Pacific, lying between 45°50' and 54°24' N.It is part of Russia, and is Russia's largest island, and is administered as part of Sakhalin Oblast...
, using the name . The area was designated a chō, the same term given to Hokkaidō
Hokkaido
, formerly known as Ezo, Yezo, Yeso, or Yesso, is Japan's second largest island; it is also the largest and northernmost of Japan's 47 prefectural-level subdivisions. The Tsugaru Strait separates Hokkaido from Honshu, although the two islands are connected by the underwater railway Seikan Tunnel...
at the time. It is commonly referred to as Karafuto Prefecture
Prefectures of Japan
The prefectures of Japan are the country's 47 subnational jurisdictions: one "metropolis" , Tokyo; one "circuit" , Hokkaidō; two urban prefectures , Osaka and Kyoto; and 43 other prefectures . In Japanese, they are commonly referred to as...
in English
English language
English is a West Germanic language that arose in the Anglo-Saxon kingdoms of England and spread into what was to become south-east Scotland under the influence of the Anglian medieval kingdom of Northumbria...
. The prefecture was divided into 4 subprefectures
Subprefectures of Japan
Certain prefectures of Japan are now, or once were, divided into subprefectures. The subprefecture is the jurisdiction surrounding a of the prefectural government. Normally, the area of a subprefecture consists of a few to a dozen cities, towns, and/or villages. Subprefectures are formed to...
(shichō), which in turn were subdivided into 11 districts
Districts of Japan
The was most recently used as an administrative unit in Japan between 1878 and 1921 and is roughly equivalent to the county of the United States, ranking at the level below prefecture and above city, town or village. As of 2008, cities belong directly to prefectures and are independent from...
, in turn divided into 41 municipalities
Municipalities of Japan
Japan has three levels of government: national, prefectural, and municipal. The nation is divided into 47 prefectures. Each prefecture consists of numerous municipalities. There are four types of municipalities in Japan: cities, towns, villages and special wards...
(1 city
Cities of Japan
||A is a local administrative unit in Japan. Cities are ranked on the same level as and , with the difference that they are not a component of...
, 13 towns
Towns of Japan
A town is a local administrative unit in Japan. It is a local public body along with prefecture , city , and village...
, and 27 villages
Villages of Japan
A is a local administrative unit in Japan.It is a local public body along with , , and . Geographically, a village's extent is contained within a prefecture....
) 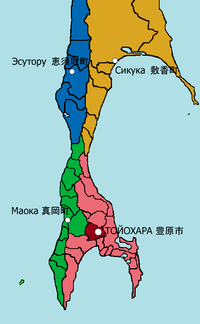