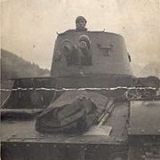 Encyclopedia
The 10th Cavalry Brigade was a Polish
Poland
Poland , officially the Republic of Poland , is a country in Central Europe bordered by Germany to the west; the Czech Republic and Slovakia to the south; Ukraine, Belarus and Lithuania to the east; and the Baltic Sea and Kaliningrad Oblast, a Russian exclave, to the north...
military unit, the only fully operational Polish motorized infantry unit during the Invasion of Poland
Invasion of Poland (1939)
The Invasion of Poland, also known as the September Campaign or 1939 Defensive War in Poland and the Poland Campaign in Germany, was an invasion of Poland by Germany, the Soviet Union, and a small Slovak contingent that marked the start of World War II in Europe...
of 1939, at the onset of World War II
World War II
World War II, or the Second World War , was a global conflict lasting from 1939 to 1945, involving most of the world's nations—including all of the great powers—eventually forming two opposing military alliances: the Allies and the Axis...
. Commanded by Col. (later General) Stanisław Maczek, it is considered the only Polish World War II military unit not to lose a single battle.

The unit was organized in February 1937, partially as an experiment. It was to be a hybrid between a standard motorized infantry brigade and the French
France
The French Republic , The French Republic , The French Republic , (commonly known as France , is a unitary semi-presidential republic in Western Europe with several overseas territories and islands located on other continents and in the Indian, Pacific, and Atlantic oceans. Metropolitan France...
concept of Division legere. As Polish cavalry
Polish cavalry
The Polish cavalry can trace its origins back to the days of Medieval mounted knights. Poland had always been a country of flatlands and fields and mounted forces operate well in this environment...
generals still had some doubts about the value of mechanized force, there was some opposition against reforming the standard horse-mounted cavalry into motorized units. Testing of the new unit was held in a specially created training ground near Kielce
Kielce
Kielce ) is a city in central Poland with 204,891 inhabitants . It is also the capital city of the Świętokrzyskie Voivodeship since 1999, previously in Kielce Voivodeship...
, as well as in the Armoured Units Training School. The brigade was supposed to be a kind of emergency unit in the Commander-in-Chief’s reserve. Its task was to screen the areas of concentration of Polish troops, to close gaps made by enemy forces in Polish lines and to fight enemy mechanized units. 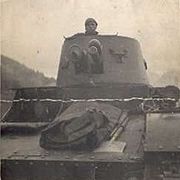 The first exercise in offensive action (1939) was considered a failure – the brigade proved to be insufficiently equipped in anti-tank ordinance to successfully counter enemy armoured units. It was also considered not versatile enough, especially when compared with a standard cavalry unit which had much better off-road capabilities and speed. Because of that, several changes in its structure were introduced, which were later copied during the formation of the Warsaw Armoured Cavalry Brigade. The commanding officer of the unit was Col. Stanisław Maczek and the chief of his staff was Maj. Franciszek Skibiński. It is to be noted that, despite being fully motorized, the brigade was still officially named "the 10th Cavalry Brigade". However, most of the sources refer to it as "Motorized" in order to distinguish the unit from its predecessors.

Colonel Maczek’s brigade was interned in Hungary. The unit lost about half of its men, but was never defeated in open combat, gaining respect even from the enemy. The Germans called 10th Cavalry Brigade "Die Schwarze Brigade" – "The Black Brigade", because of the black jackets worn by Polish mechanized troops. However, it was not the end of its history. With the silent support of Hungarians, most of its soldiers managed to get to France, to join the Polish Army led by General Sikorski. They fought in France in 1940 as the 10th Armoured Cavalry Brigade. After France surrendered, the veterans of "The Black Brigade" went to Great Britain and became the core of the Polish 1st Armoured Division
Polish 1st Armoured Division
The Polish 1st Armoured Division was an Allied military unit during World War II, created in February 1942 at Duns in Scotland. At its peak it numbered approximately 16,000 soldiers...
.