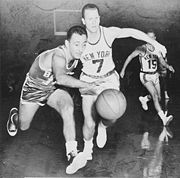 Point guard also called the play maker or "the ball-handler", is one of the standard positions in a regulation basketball
Basketball
Basketball is a team sport in which two teams of five players try to score points by throwing or "shooting" a ball through the top of a basketball hoop while following a set of rules...
game. A point guard has perhaps the most specialized role of any position – essentially, he is expected to run the team's offense by controlling the ball and making sure that it gets to the right players at the right time. Above all, the point guard must totally understand and accept his or her coach's game plan; in this way, the position can be compared to a quarterback
Quarterback
Quarterback is a position in American and Canadian football. Quarterbacks are members of the offensive team and line up directly behind the offensive line...
in American football
American football
American football is a sport played between two teams of eleven with the objective of scoring points by advancing the ball into the opposing team's end zone. Known in the United States simply as football, it may also be referred to informally as gridiron football. The ball can be advanced by...
.

A point guard, like all player positions in basketball, has specific characteristics that are essential for them to help guide their team to a victory. The Basketball Handbook by Lee Rose  describes a point guard as a coach on the floor, who can handle and distribute the ball to teammates. It also states that the more speed a point guard has, the more likely he will be able to create separation and space off the dribble, which allows the point guard room to work. Point guards should also be vocal floor leaders, and should discuss rule interpretations with officials. A point guard must always know the time on both the shot clock
Shot clock
A shot clock is used in some sports to quicken the pace of the game. It is normally associated with basketball, but has also found use in sports such as snooker, professional lacrosse, water polo, and korfball....
and the game clock, the score, the number of timeouts for both teams, and whom to foul late in the game.

Most current NBA
National Basketball Association
The National Basketball Association is the pre-eminent men's professional basketball league in North America. It consists of thirty franchised member clubs, of which twenty-nine are located in the United States and one in Canada...
point guards are between 5'11" and 6'4" (1.93 m) or shorter in height. A true point guard's job is to create scoring opportunities for his team. The role includes passing and running the offense: setting up plays on the court, getting the ball to the teammate that he feels is in the best position to score, and dictating the tempo of the game. This also means knowing when and how to instigate a fast break and when and how to initiate the more deliberate sets.

After an opponent scores, it is typically the point guard who brings the ball down court to begin an offensive play. For this reason, passing skills, ball handling, and court vision are pivotal. Point guards are often evaluated more on their assist
Assist (basketball)
In basketball, an assist is attributed to a player who passes the ball to a teammate in a way that leads to a score by field goal, meaning that he or she was "assisting" in the basket. There is some judgment involved in deciding whether a passer should be credited with an assist...
totals than on their scoring. Another major evaluation factor is Assist-to-Turnover
Turnover (basketball)
In basketball, a turnover occurs when a player from one team gives possession to a member of the opposing team by losing the ball. This can result from the ball being stolen, the player making mistakes such as stepping out or throwing the ball out of bounds, or committing a violation or committing...
ratio, which indicates the decision-making skills of the player. John Stockton
John Stockton
John Houston Stockton is a retired American professional basketball player who spent his entire career as a point guard for the Utah Jazz of the NBA from 1984 to 2003. Stockton is regarded as one of the best point guards of all time, holding the NBA records for most career assists and steals by...
, who is considered one of the greatest point guards of all time, is the NBA's all time leader in assists and steals. Still, a first-rate point guard should also have a reasonably effective jump shot.

If a point guard has more size (height, muscle) compared to the prototypical point guard, it is considered a plus, but size is only secondary to awareness and ball skills. Among the taller players who have enjoyed success at the position is Magic Johnson
Magic Johnson
Earvin "Magic" Johnson Jr. is a retired American professional basketball player who played point guard for the Los Angeles Lakers of the National Basketball Association . After winning championships in high school and college, Johnson was selected first overall in the 1979 NBA Draft by the Lakers...
, who was 6'9"/2.06 m and won the National Basketball Association Most Valuable Player Award three times in his career. Other point guards who have been named the NBA MVP include Bob Cousy
Bob Cousy
Robert Joseph "Bob" Cousy is a retired American professional basketball player. The 6'1" , 175-pound Cousy played point guard with the National Basketball Association's Boston Celtics from 1951 to 1963 and briefly with the Cincinnati Royals in the 1969–70 season...
, Oscar Robertson
Oscar Robertson
Oscar Palmer Robertson , nicknamed "The Big O", is a former American NBA player with the Cincinnati Royals and the Milwaukee Bucks...
(who somewhat foreshadowed Johnson in that he was 6'5"/1.96 m, the size of many forwards in his era), and the relatively undersized Steve Nash
Steve Nash
Stephen John "Steve" Nash, OC, OBC is a South African-born Canadian professional basketball player who plays point guard for the Phoenix Suns of the National Basketball Association . Nash enjoyed a successful high-school basketball career, and he was eventually given a scholarship by Santa Clara...
who is a two-time winner. 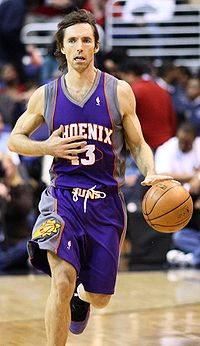 The point guard is almost always positioned on the perimeter of the play, so as to have the best view of the action. This is a necessity because of the point guard's many leadership obligations. Many times, the point guard is referred to by announcers as a "coach on the floor" or a "floor general". In the past, this was particularly true, as several point guards such as Lenny Wilkens
Lenny Wilkens
Leonard Randolph "Lenny" Wilkens is a retired American basketball player and coach in the NBA...
served their team as a player-coach. This is not so common anymore, as most coaches are now solely specialized in coaching and are non-players. Some point guards are still given a great deal of leeway in the offense, such as Steve Nash
Steve Nash
Stephen John "Steve" Nash, OC, OBC is a South African-born Canadian professional basketball player who plays point guard for the Phoenix Suns of the National Basketball Association . Nash enjoyed a successful high-school basketball career, and he was eventually given a scholarship by Santa Clara...
of the Phoenix Suns
Phoenix Suns
The Phoenix Suns are a professional basketball team based in Phoenix, Arizona. They are members of the Pacific Division of the Western Conference in the National Basketball Association and the only team in their division not to be based in California. Their home arena since 1992 has been the US...
. Former Suns head coach Mike D'Antoni
Mike D'Antoni
Michael Andrew "Mike" D'Antoni is an Italian-American former basketball player and is currently the head coach of the NBA's New York Knicks. While head coach of the Phoenix Suns, he won NBA Coach of the Year honors for the 2004–05 NBA season after the Suns posted 33 more wins than the previous...
had allowed him to freelance often when leading the Suns' offense, even letting Nash call his own plays at times. Even point guards who are not given this much freedom, however, are still extensions of their coach on the floor and must display good leadership skills.

After overall ball-handling, passing and scoring are the next most important areas of the game for a point guard. As the primary decision maker for a team, a point guard's passing ability determines how well a point guard is able to put his or her decision into play. It is one thing to be able to recognize the player that is in a tactically advantageous position, but it is another thing entirely to able to deliver the ball to that player. For this reason, a point guard is usually, but not always, more skilled and focused on passing than shooting. However, a good jump shot and the ability to score off a drive to the basket are still valuable skills. A point guard will often use his or her ability to score in order to augment his or her effectiveness as a decision maker and play maker.

Another important task for a point guard on the defensive end is to be a help defender. Whenever the player that the point guard is tasked with defending is away from the ball, a point guard will usually allow distance to accumulate from his or her assignment in order to help his or her teammates with their assignments. Walt Frazier
Walt Frazier
Walter "Clyde" Frazier is a retired American basketball player in the National Basketball Association . He was blessed with a unique combination of court vision, quickness, and size for a guard...
, Dennis Johnson
Dennis Johnson
Dennis Wayne Johnson nicknamed "DJ", was an American professional basketball player for the National Basketball Association's Seattle SuperSonics, Phoenix Suns and Boston Celtics and coach of the Los Angeles Clippers...
, Gary Payton
Gary Payton
Gary Dwayne Payton is a former American professional basketball point guard. He is best known for his 13-year tenure with the Seattle SuperSonics, and holds Seattle franchise records in points, assists, and steals...
, and Magic Johnson
Magic Johnson
Earvin "Magic" Johnson Jr. is a retired American professional basketball player who played point guard for the Los Angeles Lakers of the National Basketball Association . After winning championships in high school and college, Johnson was selected first overall in the 1979 NBA Draft by the Lakers...
are often considered among the greatest defensive point guards in NBA history.