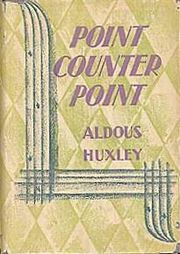 Point Counter Point is a novel by Aldous Huxley
Aldous Huxley
Aldous Leonard Huxley was an English writer and one of the most prominent members of the famous Huxley family. Best known for his novels including Brave New World and a wide-ranging output of essays, Huxley also edited the magazine Oxford Poetry, and published short stories, poetry, travel...
, first published in 1928. It is Huxley's longest novel, and was notably more complex and serious than his earlier fiction.

The novel's title is a reference to the musical technique of counterpoint
Counterpoint
In music, counterpoint is the relationship between two or more voices that are independent in contour and rhythm and are harmonically interdependent . It has been most commonly identified in classical music, developing strongly during the Renaissance and in much of the common practice period,...
, and the story is constructed after the fashion of a work of music. Instead of a single central plot, there are a number of interlinked storylines and recurring themes. Many of the characters are based on real people, most of whom Huxley knew personally.

The novel was adapted into a BBC
BBC
The British Broadcasting Corporation is a British public service broadcaster. Its headquarters is at Broadcasting House in the City of Westminster, London. It is the largest broadcaster in the world, with about 23,000 staff...
mini-series by Simon Raven
Simon Raven
Simon Arthur Noël Raven was an English novelist, essayist, dramatist and raconteur who, in a writing career of forty years, caused controversy, amusement and offence...
in 1968, starring Tristram Jellinek. It was later broadcast on PBS
Public Broadcasting Service
The Public Broadcasting Service is an American non-profit public broadcasting television network with 354 member TV stations in the United States which hold collective ownership. Its headquarters is in Arlington, Virginia....
television in 1972.