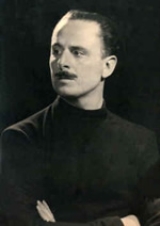 Overview
Sir Oswald Ernald Mosley, 6th Baronet, of Ancoats
Ancoats
Ancoats is an inner city area of Manchester, in North West England, next to the Northern Quarter and the northern part of Manchester's commercial centre....
, (16 November 1896 – 3 December 1980) was an English
English people
The English are a nation and ethnic group native to England, who speak English. The English identity is of early mediaeval origin, when they were known in Old English as the Anglecynn. England is now a country of the United Kingdom, and the majority of English people in England are British Citizens...
politician
Politician
A politician, political leader, or political figure is an individual who is involved in influencing public policy and decision making...
, known principally as the founder of the British Union of Fascists
British Union of Fascists
The British Union was a political party in the United Kingdom formed in 1932 by Sir Oswald Mosley as the British Union of Fascists, in 1936 it changed its name to the British Union of Fascists and National Socialists and then in 1937 to simply the British Union...
. He was a Member of Parliament
Member of Parliament
A Member of Parliament is a representative of the voters to a :parliament. In many countries with bicameral parliaments, the term applies specifically to members of the lower house, as upper houses often have a different title, such as senate, and thus also have different titles for its members,...
for Harrow
Harrow (UK Parliament constituency)
Harrow was a parliamentary constituency centred on the Harrow suburb of North London. It returned one Member of Parliament to the House of Commons of the Parliament of the United Kingdom....
from 1918 to 1924 and for Smethwick
Smethwick (UK Parliament constituency)
Smethwick was a parliamentary constituency, centred on the town of Smethwick in Staffordshire. It returned one Member of Parliament to the House of Commons of the Parliament of the United Kingdom, elected by the first past the post voting system....
from 1926 to 1931, as well as Chancellor of the Duchy of Lancaster
Chancellor of the Duchy of Lancaster
The Chancellor of the Duchy of Lancaster is, in modern times, a ministerial office in the government of the United Kingdom that includes as part of its duties, the administration of the estates and rents of the Duchy of Lancaster...
in the Labour Government of 1929–1931.
Mosley was the eldest of three sons of Sir Oswald Mosley, 5th Baronet, of Ancoats (29 December 1873 - 21 September 1928), and wife Katharine Maud Edwards-Heathcote (1874–1950), the second child of Captain
Captain (British Army and Royal Marines)
Captain is a junior officer rank of the British Army and Royal Marines. It ranks above Lieutenant and below Major and has a NATO ranking code of OF-2. The rank is equivalent to a Lieutenant in the Royal Navy and to a Flight Lieutenant in the Royal Air Force...
Justinian Edwards-Heathcote of Market Drayton
Market Drayton
Market Drayton is a small market town in north Shropshire, England. It is on the River Tern, between Shrewsbury and Stoke-on-Trent, and was formerly known as "Drayton in Hales" and earlier simply as "Drayton" ....
, Shropshire
Shropshire
Shropshire is a county in the West Midlands region of England. For Eurostat purposes, the county is a NUTS 3 region and is one of four counties or unitary districts that comprise the "Shropshire and Staffordshire" NUTS 2 region. It borders Wales to the west...
.

We have lost the good old British spirit. Instead we have American journalism and black-shirted buffoons making a cheap imitation of ice-cream sellers.

In 1927 after his Labour Party meeting in Cambridge was broken-up by pro-Fascist undergraduates. The mention of "ice-cream sellers" was a reference to Italian immigrants who had opened ice-cream parlours.

Together in Britain we have lit a flame that the ages shall not extinguish. Guard that sacred flame my brother Blackshirts until it illuminates Britain and lights again the Paths of Mankind.

[Fascism] was an explosion against intolerable conditions, against remediable wrongs which the old world failed to remedy. It was a movement to secure national renaissance by people who felt themselves threatened with decline into decadence and death and were determined to live, and live greatly.

Excerpt from My Life by Oswald Mosley (1968)

I am not, and never have been, a man of the right. My position was on the left and is now in the centre of politics.

...the old axiom that 'all power corrupts' has doubtful validity, because it derives from our neglect of Plato's advice to find men carfully and train them by methods which make them fit for heroes.

Excerpt from Beyond the Pale by Nicholas Mosley
More
x