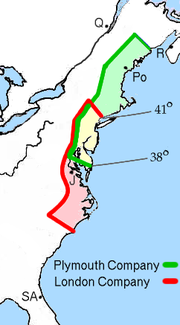 The Plymouth Company was an English
England
England is a country that is part of the United Kingdom. It shares land borders with Scotland to the north and Wales to the west; the Irish Sea is to the north west, the Celtic Sea to the south west, with the North Sea to the east and the English Channel to the south separating it from continental...
joint stock company
Joint stock company
A joint-stock company is a type of corporation or partnership involving two or more individuals that own shares of stock in the company...
founded in 1606 by James I of England
James I of England
James VI and I was King of Scots as James VI from 24 July 1567 and King of England and Ireland as James I from the union of the English and Scottish crowns on 24 March 1603...
with the purpose of establishing settlements on the coast of North America
North America
North America is a continent wholly within the Northern Hemisphere and almost wholly within the Western Hemisphere. It is also considered a northern subcontinent of the Americas...
.

In 1607, the company established the Popham Colony
Popham Colony
The Popham Colony was a short-lived English colonial settlement in North America that was founded in 1607 and located in the present-day town of Phippsburg, Maine near the mouth of the Kennebec River by the proprietary Virginia Company of Plymouth...
at the mouth of the Kennebec River
Kennebec River
The Kennebec River is a river that is entirely within the U.S. state of Maine. It rises in Moosehead Lake in west-central Maine. The East and West Outlets join at Indian Pond and the river then flows southward...
in present-day Maine
Maine
Maine is a state in the New England region of the northeastern United States, bordered by the Atlantic Ocean to the east and south, New Hampshire to the west, and the Canadian provinces of Quebec to the northwest and New Brunswick to the northeast. Maine is both the northernmost and easternmost...
. The settlement was founded in the same year that the London Company had established Jamestown
Jamestown, Virginia
Jamestown was a settlement in the Colony of Virginia. Established by the Virginia Company of London as "James Fort" on May 14, 1607 , it was the first permanent English settlement in what is now the United States, following several earlier failed attempts, including the Lost Colony of Roanoke...
, but unlike Jamestown, the Popham settlement was abandoned after only one year.

The company thus fell into disuse and in 1609, the Virginia Colony charter was reorganized to grant the London Company exclusive rights to most of the previously shared territory along the coast.

In 1620, after years of disuse, the company was revived and reorganized as the Plymouth Council for New England
Plymouth Council for New England
The Plymouth Council for New England was the name of a 17th century English joint stock company that was granted a royal charter to found colonial settlements along the coast of North America....
. The Plymouth Company had 40 patentees at that point, and established the Council for New England to oversee their efforts. The leading merchant-adventurer of the new company was Sir Ferdinando Gorges
Ferdinando Gorges
Sir Ferdinando Gorges , the "Father of English Colonization in North America", was an early English colonial entrepreneur and founder of the Province of Maine in 1622, although Gorges himself never set foot in the New World.-Biography:...
. Another patentee and member of the Council was Capt. Christopher Levett
Christopher Levett
Capt. Christopher Levett was an English writer, explorer and naval captain, born at York, England. He explored the coast of New England and secured a grant from the King to settle present-day Portland, Maine, the first European to do so. Levett left behind a group of settlers at his Maine...
, an explorer, writer and naval captain who would attempt his own settlement at present-day Portland, Maine.
The source of this article is wikipedia, the free encyclopedia.  The text of this article is licensed under the GFDL.