Encyclopedia
In astronomy
Astronomy
Astronomy is a natural science that deals with the study of celestial objects and phenomena that originate outside the atmosphere of Earth...
, a plutino is a trans-Neptunian object
Trans-Neptunian object
A trans-Neptunian object is any minor planet in the Solar System that orbits the Sun at a greater distance on average than Neptune.The first trans-Neptunian object to be discovered was Pluto in 1930...
in 2:3 mean motion resonance
Orbital resonance
In celestial mechanics, an orbital resonance occurs when two orbiting bodies exert a regular, periodic gravitational influence on each other, usually due to their orbital periods being related by a ratio of two small integers. Orbital resonances greatly enhance the mutual gravitational influence of...
with Neptune
Neptune
Neptune is the eighth and farthest planet from the Sun in the Solar System. Named for the Roman god of the sea, it is the fourth-largest planet by diameter and the third largest by mass. Neptune is 17 times the mass of Earth and is slightly more massive than its near-twin Uranus, which is 15 times...
. For every 2 orbits that a plutino makes, Neptune orbits 3 times. Plutinos are named after Pluto
Pluto
Pluto, formal designation 134340 Pluto, is the second-most-massive known dwarf planet in the Solar System and the tenth-most-massive body observed directly orbiting the Sun...
, which follows an orbit trapped in the same resonance, with the Italian
Italian language
Italian is a Romance language spoken mainly in Europe: Italy, Switzerland, San Marino, Vatican City, by minorities in Malta, Monaco, Croatia, Slovenia, France, Libya, Eritrea, and Somalia, and by immigrant communities in the Americas and Australia...
diminutive suffix -ino. The name refers only to the orbital resonance and does not imply common physical characteristics; it was invented to describe those bodies smaller than Pluto (hence the diminutive) following similar orbits. The class includes Pluto itself and its moons.

Aside from Pluto itself and Charon
Charon (moon)
Charon is the largest satellite of the dwarf planet Pluto. It was discovered in 1978 at the United States Naval Observatory Flagstaff Station. Following the 2005 discovery of two other natural satellites of Pluto , Charon may also be referred to as Pluto I...
, the first plutino, 1993 RO
1993 RO
1993 RO is a trans-Neptunian object of the plutino class.It was the first plutino discovered after Pluto itself, with 1993 RP and 1993 SB a day and two days behind. The discovery was made in 1993 at the Mauna Kea Observatory with a 2.2m telescope....
, was discovered on September 16, 1993. 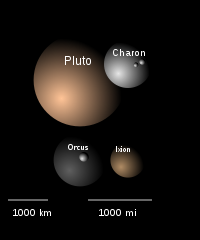 It is thought that objects that are currently in mean orbital resonances with Neptune initially followed independent heliocentric paths. As Neptune migrated outward early in the Solar System's history (see origins of the Kuiper belt), the bodies it approached would have been scattered; during this process, some of them would have been captured into resonances. The 3:2 resonance is the strongest and most stable among all resonances. This is the main reason it contains the largest number of bodies.

While the majority of plutinos have low orbital inclinations, a substantial number of them follow orbits similar to that of Pluto, with inclinations in the 10–25° range and eccentricities around 0.2–0.25, resulting in perihelia inside (or close to) the orbit of Neptune and aphelia close to the main Kuiper belt
Kuiper belt
The Kuiper belt , sometimes called the Edgeworth–Kuiper belt, is a region of the Solar System beyond the planets extending from the orbit of Neptune to approximately 50 AU from the Sun. It is similar to the asteroid belt, although it is far larger—20 times as wide and 20 to 200 times as massive...
's outer edge (where objects have 1:2 resonance with Neptune).

The orbital periods of plutinos cluster around 247.3 years (1.5 × Neptune's orbital period), varying by at most a few years from this value.

Unusual plutinos include:, which follows the most highly inclined orbit (34.5°), which has the most elliptical orbit (its eccentricity is 0.33), with the perihelion halfway between Uranus and Neptune following a quasi-circular orbit lying almost perfectly on the ecliptic
Ecliptic
The ecliptic is the plane of the earth's orbit around the sun. In more accurate terms, it is the intersection of the celestial sphere with the ecliptic plane, which is the geometric plane containing the mean orbit of the Earth around the Sun...
(inclination less than 1.5°)

See also the comparison with the distribution of the cubewanos.

The gravitational influence of Pluto is usually neglected given its small mass. However, the resonance width (the range of semi-axes compatible with the resonance) is very narrow and only a few times larger than Pluto’s Hill sphere
Hill sphere
An astronomical body's Hill sphere is the region in which it dominates the attraction of satellites. To be retained by a planet, a moon must have an orbit that lies within the planet's Hill sphere. That moon would, in turn, have a Hill sphere of its own...
(gravitational influence). Consequently, depending on the original eccentricity, some plutinos will be driven out of the resonance by interactions
Perturbation (astronomy)
Perturbation is a term used in astronomy in connection with descriptions of the complex motion of a massive body which is subject to appreciable gravitational effects from more than one other massive body....
with Pluto. Numerical simulations suggest that the orbits of plutinos with an eccentricity 10%–30% smaller or larger than that of Pluto are not stable over Ga timescales.