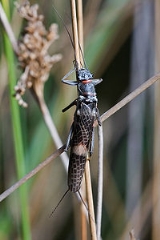 Encyclopedia
Plecoptera are an order
Order (biology)
In scientific classification used in biology, the order is# a taxonomic rank used in the classification of organisms. Other well-known ranks are life, domain, kingdom, phylum, class, family, genus, and species, with order fitting in between class and family...
of insect
Insect
Insects are a class of living creatures within the arthropods that have a chitinous exoskeleton, a three-part body , three pairs of jointed legs, compound eyes, and two antennae...
s, commonly known as stoneflies. There are some 3,500 described species
Species
In biology, a species is one of the basic units of biological classification and a taxonomic rank. A species is often defined as a group of organisms capable of interbreeding and producing fertile offspring. While in many cases this definition is adequate, more precise or differing measures are...
worldwide, with new species still being discovered. Stoneflies are found worldwide, except Antarctica. Stoneflies are believed to be one of the most primitive groups of Neoptera
Neoptera
Neoptera is a classification group that includes almost all the winged insects, specifically those that can flex their wings over their abdomens...
, with close relatives identified from the Carboniferous
Carboniferous
The Carboniferous is a geologic period and system that extends from the end of the Devonian Period, about 359.2 ± 2.5 Mya , to the beginning of the Permian Period, about 299.0 ± 0.8 Mya . The name is derived from the Latin word for coal, carbo. Carboniferous means "coal-bearing"...
and Lower Permian
Permian
The PermianThe term "Permian" was introduced into geology in 1841 by Sir Sir R. I. Murchison, president of the Geological Society of London, who identified typical strata in extensive Russian explorations undertaken with Edouard de Verneuil; Murchison asserted in 1841 that he named his "Permian...
geological periods, while true stoneflies are known from fossils only a bit younger. The modern diversity however apparently is of Mesozoic
Mesozoic
The Mesozoic era is an interval of geological time from about 250 million years ago to about 65 million years ago. It is often referred to as the age of reptiles because reptiles, namely dinosaurs, were the dominant terrestrial and marine vertebrates of the time...
origin.

Plecoptera are found in both the Southern
Southern Hemisphere
The Southern Hemisphere is the part of Earth that lies south of the equator. The word hemisphere literally means 'half ball' or "half sphere"...
and Northern hemisphere
Northern Hemisphere
The Northern Hemisphere is the half of a planet that is north of its equator—the word hemisphere literally means “half sphere”. It is also that half of the celestial sphere north of the celestial equator...
s, and the populations are quite distinct although the evolution
Evolution
Evolution is any change across successive generations in the heritable characteristics of biological populations. Evolutionary processes give rise to diversity at every level of biological organisation, including species, individual organisms and molecules such as DNA and proteins.Life on Earth...
ary evidence suggests that species may have crossed the equator on a number of occasions before once again becoming geographically isolated.

Stoneflies have a generalised anatomy, with few specialised features. They have simple mouthparts
Insect mouthparts
Insects exhibit a range of mouthparts, adapted to particular modes of feeding. The earliest insects had chewing mouthparts...
with chewing mandibles
Mandible (arthropod)
thumb|250px|The mandibles of a [[Bull ant]]The mandible of an arthropod is either of a pair of mouthparts used for biting, cutting and holding food. Mandibles are often simply referred to as jaws. Mandibles are present in the extant subphyla Myriapoda , Crustacea and Hexapoda...
, long, multi-segmented antennae
Antenna (biology)
Antennae in biology have historically been paired appendages used for sensing in arthropods. More recently, the term has also been applied to cilium structures present in most cell types of eukaryotes....
, large compound eyes and two or three ocelli. The legs are robust, with each ending in two claws. The abdomen
Abdomen
In vertebrates such as mammals the abdomen constitutes the part of the body between the thorax and pelvis. The region enclosed by the abdomen is termed the abdominal cavity...
is relatively soft, and may include remnants of the nymphal gills even in the adult. Both nymph
Nymph (biology)
In biology, a nymph is the immature form of some invertebrates, particularly insects, which undergoes gradual metamorphosis before reaching its adult stage. Unlike a typical larva, a nymph's overall form already resembles that of the adult. In addition, while a nymph moults it never enters a...
s and adults have long paired cerci
Cercus
Cerci are paired appendages on the rear-most segments of many arthropods, including insects and arachnids but not crustaceans. Cerci often serve as sensory organs, but they may also be used as weapons or copulation aids, or they may simply be vestigial structures.Typical cerci may appear to be...
projecting from the tip of their abdomens.

The name "Plecoptera" literally means "braid
Braid
A braid is a complex structure or pattern formed by intertwining three or more strands of flexible material such as textile fibres, wire, or human hair...
ed-wings", from the Ancient Greek
Ancient Greek
Ancient Greek is the stage of the Greek language in the periods spanning the times c. 9th–6th centuries BC, , c. 5th–4th centuries BC , and the c. 3rd century BC – 6th century AD of ancient Greece and the ancient world; being predated in the 2nd millennium BC by Mycenaean Greek...
plekein (πλέκειν, "to braid") and pteryx (πτέρυξ, "wing"). This refers to the complex venation of their two pairs of wings, which are membranous
Biological membrane
A biological membrane or biomembrane is an enclosing or separatingmembrane that acts as a selective barrier, within or around a cell. It consists of a lipid bilayer with embedded proteins that may constitute close to 50% of membrane content...
and fold flat over the back. Stoneflies are generally not strong fliers, and some species are entirely wingless.

A few wingless species such as the Lake Tahoe benthic stonefly ("Capnia" lacustra) or Baikaloperla are the only known insects, perhaps with the exception of Halobates
Halobates
Halobates or sea skaters are a genus with over 40 species of water striders. While many are coastal, about five of these are able to survive and stand on the surface of the open ocean, a habitat containing very few insect species. They are predators, coastal species feeding mainly on fallen...
, that are exclusively aquatic from birth to death. Some true water bugs (Nepomorpha) may also be fully aquatic for their entire life, but can leave the water to travel.

The females lay hundreds or even thousands of eggs in a ball which they initially carry about on their abdomen, and later deposit into the water. The eggs typically take two to three weeks to hatch, but some species undergo diapause
Diapause
Diapause is the delay in development in response to regularly and recurring periods of adverse environmental conditions. It is considered to be a physiological state of dormancy with very specific initiating and inhibiting conditions...
, with the eggs remaining dormant throughout a dry season, and hatching only when conditions are suitable. Stonelflys like to live in areas with running water.

The nymphs are aquatic and live in the benthic zone
Benthic zone
The benthic zone is the ecological region at the lowest level of a body of water such as an ocean or a lake, including the sediment surface and some sub-surface layers. Organisms living in this zone are called benthos. They generally live in close relationship with the substrate bottom; many such...
of well-oxygenated lakes and streams. A few species found in New Zealand and nearby islands have terrestrial nymphs, but even these inhabit only very moist environments. The nymphs physically resemble wingless adults, but often have external gills, which may be present on almost any part of the body. In addition, they can also respire through the general body surface, and some even lack gills altogether. Most species are herbivorous as nymphs, feeding on submerged leaves and benthic algae, but many are hunters of other aquatic arthropods.

The insects remain in the nymphal form for one to four years, depending on species, and undergo anything from 12 to 33 molts
Ecdysis
Ecdysis is the moulting of the cuticula in many invertebrates. This process of moulting is the defining feature of the clade Ecdysozoa, comprising the arthropods, nematodes, velvet worms, horsehair worms, rotifers, tardigrades and Cephalorhyncha...
before emerging and becoming terrestrial as adults. The adults generally only survive for a few weeks, and emerge only during specific times of the year. Some do not feed at all, but those that do are herbivorous.

Traditionally, the stoneflies were divided into two suborders, the "Antarctoperlaria" (or "Archiperlaria") and the Arctoperlaria
Arctoperlaria
-Distribution:See -References:* Zwick. 1969. Das Phylogenetische System der Plecopteren als Ergebnis vergleichend-anatomischer Untersuchgen. 291 pp., Kurzfassung: 4 pp.* Zwick. 1973. Das Tierreich 94:53, 213* Zwick. 2000. Annu.Rev.Entomol. 45:718...
. However, the former simply consists of the two basalmost superfamilies of stoneflies, which do not seem to be each other's closest relatives. Thus, the "Antarctoperlaria" are not considered a natural group (despite some claims to the contrary).

The Arctoperlaria, meanwhile, have been divided into two infraorders, the Euholognatha (or Filipalpia) and the Systellognatha (also called Setipalpia or Subulipalpia). This corresponds to the phylogeny, with one exception: the Scopuridae must be considered a basal family in the Arctoperlaria, not assignable to any of the infraorders. Alternatively, the Scopuridae were placed in an unranked clade
Clade
A clade is a group consisting of a species and all its descendants. In the terms of biological systematics, a clade is a single "branch" on the "tree of life". The idea that such a "natural group" of organisms should be grouped together and given a taxonomic name is central to biological...
"Holognatha" together with the Euholognatha (meaning approximately "advanced Holognatha"). But the Scopuridae do not appear significantly closer to the Euholognatha than to the Systellognatha.

In addition, not adopting the clades Antarctoperlaria and Holognatha allows for a systematic layout of the Plecoptera that adequately reproduces phylogeny, while retaining the traditional ranked taxa
Taxonomic rank
In biological classification, rank is the level in a taxonomic hierarchy. Examples of taxonomic ranks are species, genus, family, and class. Each rank subsumes under it a number of less general categories...
.