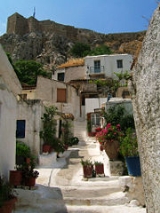 Encyclopedia
Pláka is the old historical neighborhood of Athens
Athens
Athens , is the capital and largest city of Greece. Athens dominates the Attica region and is one of the world's oldest cities, as its recorded history spans around 3,400 years. Classical Athens was a powerful city-state...
, clustered around the northern and eastern slopes of the Acropolis
Acropolis
Acropolis means "high city" in Greek, literally city on the extremity and is usually translated into English as Citadel . For purposes of defense, early people naturally chose elevated ground to build a new settlement, frequently a hill with precipitous sides...
, and incorporating labyrinthine streets and neoclassical architecture. Plaka is built on top of the residential areas of the ancient town of Athens. It is known as the "Neighbourhood of the Gods" due to its proximity to the Acropolis and its many archaeological sites.

The name "Plaka" was not in use until after the Greek War of Independence
Greek War of Independence
The Greek War of Independence, also known as the Greek Revolution was a successful war of independence waged by the Greek revolutionaries between...
. Instead, the Athenians of that time referred to the area by various names such as Alikokou, Kontito, Kandili, or by the names of the local churches. The name Plaka became commonly in use in the first years of the rule of King Otto. The origin of the name is uncertain: it has been theorized to come from Arvanite
Arvanitika
Arvanitika also known Arvanitic is the variety of Albanian traditionally spoken by the Arvanites, a population group in Greece...
"Pliak Athena", meaning "Old Athens", or from the presence of a "plaque" which once marked its central intersection.

Plaka is on the northeast slope of Acropolis
Acropolis
Acropolis means "high city" in Greek, literally city on the extremity and is usually translated into English as Citadel . For purposes of defense, early people naturally chose elevated ground to build a new settlement, frequently a hill with precipitous sides...
, between Syntagma
Syntagma Square
Syntagma Square , is located in central Athens, Greece. The Square is named after the Constitution that King Otto was forced to grant the people after a popular and military uprising, on September 3, 1843....
and Monastiraki square
Monastiraki
Monastiraki is a flea market neighborhood in the old town of Athens, Greece, and is one of the principal shopping districts in Athens. The area is home to clothing boutiques, souvenir shops, and specialty stores, and is a major tourist attraction in Athens and Attica for bargain shopping...
. Adrianou Street (running north and south) is the largest and most central street in Plaka and divides it into two areas: the upper level, - Ano Plaka - located right under the Acropolis and the lower level - Kato Plaka - situated between Syntagma and Monastiraki.

Plaka was developed mostly around the ruins of Ancient Agora of Athens
Ancient Agora of Athens
The Ancient Agora of Athens is the best-known example of an ancient Greek agora, located to the northwest of the Acropolis and is bounded on the south by the hill of the Areopagus and on the west by the hill known as the Colonus Agoraeus.-History:The agora in Athens had private housing, until it...
in an area that has been continuously inhabited since antiquity. During the years of Ottoman rule, Plaka was the known as the "Turkish quarter of Athens", and the seat of the Turkish Voevode (Governor). During the Greek War of Independence
Greek War of Independence
The Greek War of Independence, also known as the Greek Revolution was a successful war of independence waged by the Greek revolutionaries between...
, Plaka like the rest of Athens, was temporarily abandoned by its inhabitants because of the severe battles that took place mostly in 1826. The area was repopulated during the first years of King Otto's rule. Plaka had a sizable Arvanite community till the late 19th century, which lead some to refer to it as the Albanian (Arvanite
Arvanites
Arvanites are a population group in Greece who traditionally speak Arvanitika, a dialect of the Albanian language. They settled in Greece during the late Middle Ages and were the dominant population element of some regions of the Peloponnese and Attica until the 19th century...
) quarter of Athens
. At the same period the neighborhood of Anafiotika
Anafiotika
Anafiotika is a scenic tiny neighborhood of Athens, part of old historical neighborhood called Plaka. It lies in northerneast side of the Acropolis hill. First houses were built in the era of Otto of Greece when workers from the island of Anafi came to Athens in order to work as constructor workers...
, featuring traditional Cycladic architecture, was built by settlers from the Aegean
Aegean Sea
The Aegean Sea[p] is an elongated embayment of the Mediterranean Sea located between the southern Balkan and Anatolian peninsulas, i.e., between the mainlands of Greece and Turkey. In the north, it is connected to the Marmara Sea and Black Sea by the Dardanelles and Bosporus...
island of Anafi
Anafi
Anafi is a Greek island community in the Cyclades. In 2001, it had a population of 273 inhabitants. Its land area is 40.370 km². It lies east of the island of Thíra...
.

In 1884 a fire burned down a large part of the neighborhood which gave the opportunity for the archaeologists to conduct excavations in the Roman Market and Hadrian’s library. Excavations have been taking place continuously since 19th century.

Plaka is visited by hundreds of thousands of tourists around the year, and is under strict zoning and conservation regulations, being the only neighborhood in Athens where all utilities (water, power, cable television, telephone, internet, and sewage) lie underground in fully accessible, custom-made tunneling. Motor vehicles are not allowed in Plaka, and most streets are too narrow, thus not being able to accommodate them anyway.

Museums in Plaka include the new Jewish Museum of Greece
Jewish Museum of Greece
The Jewish Museum of Greece is a museum in Athens, Greece. It was established by Nicholas Stavriyklakis in 1977 to preserve the material culture of the Greek Jews.-External links:* * * * *...
, the Museum of Greek Folk Art
Museum of Greek Folk Art
The Museum of Greek Folk Art is a museum in Athens, Greece. The museum was founded in 1918 as the Museum of Greek Handicrafts in the Tsisdarakis Mosque in Monastiraki, which later became the National Museum of Decorative Arts and in 1959 it obtained its current name. In 1973 the most of the...
, an annex of which is the Old Public Baths building, the Frissiras Museum
Frissiras Museum
Frissiras Museum is a contemporary painting museum in Plaka Athens, Greece. It was founded and endowed by Vlassis Frissiras, an art-collecting lawyer. Its permanent collection consists of 3000 paintings and sculptures by Greek and other European artists on the subject of the human form.-External...
, the Museum of Popular Music Instruments
Museum of Popular Music Instruments
The Museum of Popular Music Instruments is a museum and Research Centre for Ethnomusicology in the Lassanis Mansion, Plaka, Athens, Greece. It displays about 600 Greek musical instruments from the last 300 years and has as many more in store.-Collection:...
, the Museum of Pavlos and Alexandra Kanellopoulou and the Athens University Museum
Athens University Museum
The Athens University Museum is a museum in Plaka, Athens, Greece.The building was a structure of the Ottoman period but fundamentally restructured between 1831 and 1833 by Stamatios Kleanthis and Eduard Schaubert for their architectural office. From 1837 to 1841 it housed the newly founded...
. Excavations have proven that Adrianou Street is the oldest street in Athens still in continuous use with exactly the same layout since antiquity.