Encyclopedia
Plains is a city in Sumter County, Georgia
Sumter County, Georgia
Sumter County is a county located in the southwest portion of the U.S. state of Georgia. It was created on December 26, 1831. As of 2000, the population was 33,200. The 2007 Census Estimate shows a population of 32,532...
, United States. The population was 776 at the 2010 census. It is part of the Americus
Americus, Georgia
-Early years:Americus, Georgia was named and chartered by Sen. Lovett B. Smith in 1832.For its first two decades, Americus was a small courthouse town. The arrival of the railroad in 1854 and, three decades later, local attorney Samuel H. Hawkins' construction of the only privately financed...
Micropolitan Statistical Area
Americus micropolitan area
The Americus Micropolitan Statistical Area, as defined by the United States Census Bureau, is an area consisting of two counties in Georgia, anchored by the city of Americus....
. 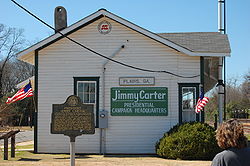 Jimmy Carter
Jimmy Carter
James Earl "Jimmy" Carter, Jr. is an American politician who served as the 39th President of the United States and was the recipient of the 2002 Nobel Peace Prize, the only U.S. President to have received the Prize after leaving office...
was born in Plains at the Wise Sanitarium (now renamed the Lillian G. Carter Nursing Center
Lillian G. Carter Nursing Center
The Lillian G. Carter Nursing Center formerly known as the Wise Sanitarium in Plains, Georgia is a hospital. It is probably best noted as the birthplace of Former United States President Jimmy Carter, who was born there on October 1, 1924....
.) His wife Rosalyn Carter, his younger brother Billy Carter
Billy Carter
William Alton "Billy" Carter III was an American businessman who promoted Billy Beer, was a candidate for Mayor of Plains, Georgia, and was the younger brother of United States President Jimmy Carter.-Early years:...
, his younger sister, Ruth Carter Stapleton
Ruth Carter Stapleton
Ruth Carter Stapleton was a sister of Jimmy Carter and was known in her own right as a Christian evangelist. She died of pancreatic cancer in 1983.- Early life :...
, and first cousin Hugh Carter
Hugh Carter
Hugh Alton Carter, Sr. was an American politician and businessman from GeorgiaBorn in Plains, Georgia, Carter served in the United States Army during World War II. Carter graduated from Georgia Southwestern State University, when the college was a two year college and then from the University of...
were also born in Plains. The former president and his wife still live there.

As of the census
Census
A census is the procedure of systematically acquiring and recording information about the members of a given population. It is a regularly occurring and official count of a particular population. The term is used mostly in connection with national population and housing censuses; other common...
of 2000, there were 637 people, 215 households, and 136 families residing in the city. The population density
Population density
Population density is a measurement of population per unit area or unit volume. It is frequently applied to living organisms, and particularly to humans...
was 780.0 people per square mile (299.9/km²). There were 244 housing units at an average density of 298.8 per square mile (114.9/km²). The racial makeup of the city was 38.62% White, 59.81% African American, 1.26% from other races
Race (United States Census)
Race and ethnicity in the United States Census, as defined by the Federal Office of Management and Budget and the United States Census Bureau, are self-identification data items in which residents choose the race or races with which they most closely identify, and indicate whether or not they are...
, and 0.31% from two or more races. Hispanic or Latino of any race were 2.83% of the population.
There were 215 households out of which 25.6% had children under the age of 18 living with them, 36.7% were married couples living together, 24.2% had a female householder with no husband present, and 36.3% were non-families. 34.9% of all households were made up of individuals and 19.5% had someone living alone who was 65 years of age or older. The average household size was 2.50 and the average family size was 3.31.

The median income for a household in the city was $26,719, and the median income for a family was $29,375. Males had a median income of $24,375 versus $16,406 for females. The per capita income
Per capita income
Per capita income or income per person is a measure of mean income within an economic aggregate, such as a country or city. It is calculated by taking a measure of all sources of income in the aggregate and dividing it by the total population...
for the city was $11,602. About 22.2% of families and 25.6% of the population were below the poverty line, including 47.2% of those under age 18 and 17.3% of those age 65 or over.

Originally inhabited by the Muscogee people, by the 1840s three small settlements existed nearby: Plains of Dura, Magnolia Springs, and Lebanon. As railway access expanded into the region in response to increased cotton farming, these settlements coalesced closer to the new railway location. As businesses rapidly developed, local businessmen successfully petitioned the State Legislature
Georgia General Assembly
The Georgia General Assembly is the state legislature of the U.S. state of Georgia. It is bicameral, being composed of the Georgia House of Representatives and the Georgia Senate....
to shorten Plains of Dura to Plains. Plains was subsequently incorporated
Municipal corporation
A municipal corporation is the legal term for a local governing body, including cities, counties, towns, townships, charter townships, villages, and boroughs. Municipal incorporation occurs when such municipalities become self-governing entities under the laws of the state or province in which...
in 1896. Plains' continued to experience growth fueled by cotton cultivation well into the early twentieth century. A substantial school and the pioneering Wise Sanitarium were both built in the 1920s. Despite differentiation into peanut cultivation, the Great Depression
Great Depression
The Great Depression was a severe worldwide economic depression in the decade preceding World War II. The timing of the Great Depression varied across nations, but in most countries it started in about 1929 and lasted until the late 1930s or early 1940s...
deprived the community of much of its prosperity. Plains remained a quiet Southern town until Jimmy Carter
Jimmy Carter
James Earl "Jimmy" Carter, Jr. is an American politician who served as the 39th President of the United States and was the recipient of the 2002 Nobel Peace Prize, the only U.S. President to have received the Prize after leaving office...
rose to political prominence in the 1970s.