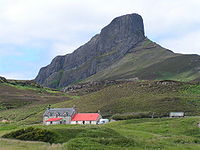 Pitchstone is a dull black glassy volcanic rock
Volcanic rock
Volcanic rock is a rock formed from magma erupted from a volcano. In other words, it is an igneous rock of volcanic origin...
formed when viscous lava
Lava
Lava refers both to molten rock expelled by a volcano during an eruption and the resulting rock after solidification and cooling. This molten rock is formed in the interior of some planets, including Earth, and some of their satellites. When first erupted from a volcanic vent, lava is a liquid at...
or magma
Magma
Magma is a mixture of molten rock, volatiles and solids that is found beneath the surface of the Earth, and is expected to exist on other terrestrial planets. Besides molten rock, magma may also contain suspended crystals and dissolved gas and sometimes also gas bubbles. Magma often collects in...
cools swiftly. It is similar to but coarser than obsidian
Obsidian
Obsidian is a naturally occurring volcanic glass formed as an extrusive igneous rock.It is produced when felsic lava extruded from a volcano cools rapidly with minimum crystal growth...
. It is a volcanic glass with a conchoidal fracture
Conchoidal fracture
Conchoidal fracture describes the way that brittle materials break when they do not follow any natural planes of separation. Materials that break in this way include flint and other fine-grained minerals, as well as most amorphous solids, such as obsidian and other types of glass.Conchoidal...
(like glass), a resinous lustre, and a variable composition. Its colour may be mottled, streaked, or uniform brown, red, green, gray, or black. It is an extrusive rock that is very resistant to erosion.

The ridge of An Sgurr
An Sgurr (Eigg)
An Sgurr is the highest hill on the Inner Hebridean island of Eigg, Lochaber, Highland, Scotland. It was formed around 58 million years ago; the result of one of the last eruptions of a volcano, the core of which now forms the Isle of Rùm. Thick viscous pitchstone lava flowed out, filling a river...
on the Isle of Eigg
Eigg
Eigg is one of the Small Isles, in the Scottish Inner Hebrides. It lies to the south of the Skye and to the north of the Ardnamurchan peninsula. Eigg is long from north to south, and east to west. With an area of , it is the second largest of the Small Isles after Rùm.-Geography:The main...
was originally formed as a lava flow in a valley.
The source of this article is wikipedia, the free encyclopedia.  The text of this article is licensed under the GFDL.