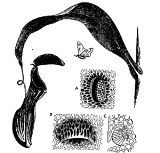 Overview
Pitcher plants are carnivorous plant
Carnivorous plant
Carnivorous plants are plants that derive some or most of their nutrients from trapping and consuming animals or protozoans, typically insects and other arthropods. Carnivorous plants appear adapted to grow in places where the soil is thin or poor in nutrients, especially nitrogen, such as acidic...
s whose prey-trapping mechanism features a deep cavity filled with liquid
Liquid
Liquid is one of the three classical states of matter . Like a gas, a liquid is able to flow and take the shape of a container. Some liquids resist compression, while others can be compressed. Unlike a gas, a liquid does not disperse to fill every space of a container, and maintains a fairly...
known as a pitfall trap. It has been widely assumed that the various sorts of pitfall trap evolved from rolled leaves, with selection
Natural selection
Natural selection is the nonrandom process by which biologic traits become either more or less common in a population as a function of differential reproduction of their bearers. It is a key mechanism of evolution....
pressure favouring more deeply cupped leaves over evolution
Evolution
Evolution is any change across successive generations in the heritable characteristics of biological populations. Evolutionary processes give rise to diversity at every level of biological organisation, including species, individual organisms and molecules such as DNA and proteins.Life on Earth...
ary time. However, some pitcher plant genera
Genus
In biology, a genus is a low-level taxonomic rank used in the biological classification of living and fossil organisms, which is an example of definition by genus and differentia...
(such as Nepenthes
Nepenthes
The Nepenthes , popularly known as tropical pitcher plants or monkey cups, are a genus of carnivorous plants in the monotypic family Nepenthaceae. The genus comprises roughly 130 species, numerous natural and many cultivated hybrids...
) are placed within clades
Cladistics
Cladistics is a method of classifying species of organisms into groups called clades, which consist of an ancestor organism and all its descendants . For example, birds, dinosaurs, crocodiles, and all descendants of their most recent common ancestor form a clade...
consisting mostly of flypaper traps: this indicates that this view may be too simplistic, and some pitchers may have evolved from the common ancestors of today's flypaper traps by loss of mucilage
Mucilage
Mucilage is a thick, gluey substance produced by most plants and some microorganisms. It is a polar glycoprotein and an exopolysaccharide.It occurs in various parts of nearly all classes of plant, usually in relatively small percentages, and is frequently associated with other substances, such as...
.

Whatever their evolutionary origins, foraging, flying or crawling insect
Insect
Insects are a class of living creatures within the arthropods that have a chitinous exoskeleton, a three-part body , three pairs of jointed legs, compound eyes, and two antennae...
s such as flies are attracted to the cavity formed by the cupped leaf, often by visual lures such as anthocyanin
Anthocyanin
Anthocyanins are water-soluble vacuolar pigments that may appear red, purple, or blue according to pH...
pigments, and nectar bribes.

Can you use a pitcherplant to catch cockroaches?

My Pitcher plant has Stopped making pitchers. It is otherwise very healthy and growing well. However it has no pitchers on it anymore amd isn't formin...

How does the purple pitcher plant take in oxygen and lets out carbon dioxide?
More

Why do pitcher plants eat insects