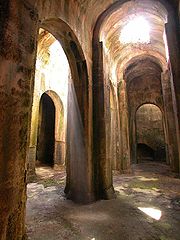 The Piscina Mirabilis was a freshwater cistern on the Bacoli
Bacoli
Bacoli is a comune in the Province of Naples in the Italian region Campania, located about 15 km west of Naples. As of 31 December 2004, it had a population of 27,402 and an area of 13.3 km².-History:...
cliff at the western end of the Gulf of Naples
Naples
Naples is a city in Southern Italy, situated on the country's west coast by the Gulf of Naples. Lying between two notable volcanic regions, Mount Vesuvius and the Phlegraean Fields, it is the capital of the region of Campania and of the province of Naples...
, southern Italy
Italy
Italy , officially the Italian Republic languages]] under the European Charter for Regional or Minority Languages. In each of these, Italy's official name is as follows:;;;;;;;;), is a unitary parliamentary republic in South-Central Europe. To the north it borders France, Switzerland, Austria and...
. One of the largest freshwater cisterns built by the ancient Romans, it was situated there in order to provide the Roman western imperial fleet at Portus Julius
Portus Julius
Portus Julius was the home port for the Roman western imperial fleet, the classis Misenensis, named for nearby Cape Miseno...
with drinking water.

The cistern was dug entirely out of the tuff
Tuff
Tuff is a type of rock consisting of consolidated volcanic ash ejected from vents during a volcanic eruption. Tuff is sometimes called tufa, particularly when used as construction material, although tufa also refers to a quite different rock. Rock that contains greater than 50% tuff is considered...
cliff face and was 15 metres high/deep (ca. 49 feet), 72 metres long (ca. 236 feet), and 25 metres wide (ca. 82 feet). The capacity/volume was 12,600 cubic metres (ca. 445,000 cubic feet) http://www.napoliunderground.org/en/component/content/article/56-artificial-cavity/2205-piscina-mirabilis.html. It was supported by vaulted
Vault (architecture)
A Vault is an architectural term for an arched form used to provide a space with a ceiling or roof. The parts of a vault exert lateral thrust that require a counter resistance. When vaults are built underground, the ground gives all the resistance required...
ceilings and 48 pillars. It was supplied with water from the main Roman acqueduct, the Aqua Augusta, that brought water from sources in Serino
Serino
Serino is a town and comune in the province of Avellino, Campania, Italy.Famous for its very clean water source, Serino is found 51 km from Naples, 21 km from Salerno, and 8 km from Avellino. Serino is also famous for its production of chestnuts....
near Avellino
Avellino
Avellino is a town and comune, capital of the province of Avellino in the Campania region of southern Italy. It is situated in a plain surrounded by mountains 42 km north-east of Naples and is an important hub on the road from Salerno to Benevento.-History:Before the Roman conquest, the...
, 100 kilometres distant, to Naples. Parts of the ancient cistern may still be visited.