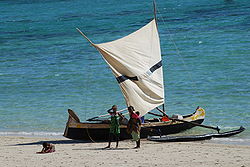 A pirogue is a small, flat-bottomed boat
Flat-bottomed boat
A flat-bottomed boat is a boat with a flat bottomed, two-chined hull, which allows it be used in shallow bodies of water, such as rivers, because it is less likely to ground....
of a design associated particularly with the Cajun
Cajun
Cajuns are an ethnic group mainly living in the U.S. state of Louisiana, consisting of the descendants of Acadian exiles...
s of the Louisiana
Louisiana
Louisiana is a state located in the southern region of the United States of America. Its capital is Baton Rouge and largest city is New Orleans. Louisiana is the only state in the U.S. with political subdivisions termed parishes, which are local governments equivalent to counties...
marsh. In West Africa
West Africa
West Africa or Western Africa is the westernmost region of the African continent. Geopolitically, the UN definition of Western Africa includes the following 16 countries and an area of approximately 5 million square km:-Flags of West Africa:...
they were used as traditional fishing boats. These boats are not usually intended for overnight travel but are light and small enough to be easily taken onto land. The design also allows the pirogue to move through the very shallow water of marshes and be easily turned over to drain any water that may get into the boat. A pirogue has "hard chines". This means that instead of a smooth curve from the gunwhales to the keel there is often a flat bottom which meets the plane of the side. The pirogue is usually propelled by paddles that have one blade (as opposed to a kayak paddle, which has two). It can also be punted with a push pole in shallow water. Small sail
Sail
A sail is any type of surface intended to move a vessel, vehicle or rotor by being placed in a wind—in essence a propulsion wing. Sails are used in sailing.-History of sails:...
s can also be employed. Outboard motors are increasingly being used in many regions.

The word comes from the Spanish
Spanish language
Spanish , also known as Castilian , is a Romance language in the Ibero-Romance group that evolved from several languages and dialects in central-northern Iberia around the 9th century and gradually spread with the expansion of the Kingdom of Castile into central and southern Iberia during the...
word piragua piˈɾaɣwa. Traditionally, it was just another name for dugout
Dugout (boat)
A dugout or dugout canoe is a boat made from a hollowed tree trunk. Other names for this type of boat are logboat and monoxylon. Monoxylon is Greek -- mono- + ξύλον xylon -- and is mostly used in classic Greek texts. In Germany they are called einbaum )...
canoes, but it came to refer to a specific type of canoe. Traditionally in Louisiana the boats were constructed of cypress, but suitable natural lumber is no longer readily available. Plywood is the common material for modern pirogues. Many modern duck hunters and fisherman in the swamps of south Louisiana use pirogues made of fiberglass, some of which are outfitted with small outboard motors or even "Go-Devils", a type of motor with a pivoting drive shaft for use in very shallow waters.

In his 1952 classic song Jambalaya
Jambalaya (On the Bayou)
"Jambalaya " is the title of a song written and recorded by American country music singer Hank Williams that was first released in July 1952...
, Hank Williams refers to the pirogue in the line "me gotta go pole the pirogue down the bayou". Johnny Horton
Johnny Horton
John Gale "Johnny" Horton was an American country music and rockabilly singer most famous for his semi-folk, so-called "saga songs" which began the "historical ballad" craze of the late 1950s and early 1960s...
, an avid Louisiana fisherman who celebrated Cajun
Cajun
Cajuns are an ethnic group mainly living in the U.S. state of Louisiana, consisting of the descendants of Acadian exiles...
customs and culture, also mentions pirogues in his 1956 song "I Got a Hole in My Pirogue."

Doug Kershaw's 1961 hit "Louisiana Man" includes the line "..he jumps in his pirogue headed down the bayou". Many online lyrics sites mis-understand this line, saying 'hero' or sometimes 'biro' instead.

On the Lewis and Clark expedition, pirogues were used during the entire journey. Henry D. Thoreau writes of using heavy pirogues in his book "The Maine Woods".

In 626, when the Avars
Eurasian Avars
The Eurasian Avars or Ancient Avars were a highly organized nomadic confederacy of mixed origins. They were ruled by a khagan, who was surrounded by a tight-knit entourage of nomad warriors, an organization characteristic of Turko-Mongol groups...
were besieging Constantinople
Constantinople
Constantinople was the capital of the Roman, Eastern Roman, Byzantine, Latin, and Ottoman Empires. Throughout most of the Middle Ages, Constantinople was Europe's largest and wealthiest city.-Names:...
, the Slavonians crossed the Golden Horn
Golden Horn
The Golden Horn is a historic inlet of the Bosphorus dividing the city of Istanbul and forming the natural harbor that has sheltered Greek, Roman, Byzantine, Ottoman and other ships for thousands of...
in their pirogues and landed on the shore of the Lower Blachernae
Blachernae
Blachernae was a suburb in the northwestern section of Constantinople, the capital city of the Byzantine Empire. It was the site of a spring and a number of prominent churches were built there, most notably the great Church of St. Mary of Blachernae , built by Empress Pulcheria in circa 450,...
, and in spite of all defensive measures that were taken, looted churches.

Pirogues were used by Lewis and Clark on the Missouri River
Missouri River
The Missouri River flows through the central United States, and is a tributary of the Mississippi River. It is the longest river in North America and drains the third largest area, though only the thirteenth largest by discharge. The Missouri's watershed encompasses most of the American Great...
and westward from 1804–1806, in addition to bateau
Bateau
A bateau or batteau is a shallow-draft, flat-bottomed boat which was used extensively across North America, especially in the colonial period and in the fur trade. It was traditionally pointed at both ends but came in a wide variety of sizes...
x, larger flat-bottomed boats that could only be used in large rivers.

There is not one pirogue design, but several. Besides small pirogues as seen above, there are also pirogues that can hold up to ten men with paddles and also feature a main sail. These too, however, are not designed (and should not be used) for open waters. They are best used near shore.