Encyclopedia
On October 11, 1958, Pioneer 1 became the first spacecraft
Spacecraft
A spacecraft or spaceship is a craft or machine designed for spaceflight. Spacecraft are used for a variety of purposes, including communications, earth observation, meteorology, navigation, planetary exploration and transportation of humans and cargo....
launched by NASA
NASA
The National Aeronautics and Space Administration is the agency of the United States government that is responsible for the nation's civilian space program and for aeronautics and aerospace research...
, the newly formed space agency of the United States
United States
The United States of America is a federal constitutional republic comprising fifty states and a federal district...
. The flight was the second and most successful of the three Thor-Able
Thor-Able
The Thor-Able was an American expendable launch system and sounding rocket used for a series of re-entry vehicle tests and satellite launches between 1958 and 1960. It was a two stage rocket, consisting of a Thor IRBM as a first stage, and a Vanguard-derived Able second stage. On some flights, an...
space probes. 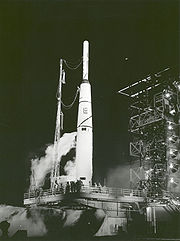 Pioneer 1 was fabricated by Ramo-Wooldridge Corp.(TRW
TRW
TRW Inc. was an American corporation involved in a variety of businesses, mainly aerospace, automotive, and credit reporting. It was a pioneer in multiple fields including electronic components, integrated circuits, computers, software and systems engineering. TRW built many spacecraft,...
), and consisted of a thin cylindrical midsection with a squat truncated cone on each side. The cylinder was 74 cm (29 in) in diameter and the height from the top of one cone to the top of the opposite cone was 76 cm (30 in). Along the axis of the spacecraft and protruding from the end of the lower cone was an 11 kg solid propellant injection rocket and rocket case, which formed the main structural member of the spacecraft. Eight small low-thrust solid propellant velocity adjustment rockets were mounted on the end of the upper cone in a ring assembly which could be jettisoned after use. A magnetic dipole antenna
Dipole antenna
A dipole antenna is a radio antenna that can be made of a simple wire, with a center-fed driven element. It consists of two metal conductors of rod or wire, oriented parallel and collinear with each other , with a small space between them. The radio frequency voltage is applied to the antenna at...
also protruded from the top of the upper cone. The shell was composed of laminated plastic. The total mass of the spacecraft after vernier separation was 34.2 kg, after injection rocket firing it would have been 23.2 kg.

The scientific instrument package had a mass of 17.8 kg and consisted of an image scanning infrared television system to study the Moon
Moon
The Moon is Earth's only known natural satellite,There are a number of near-Earth asteroids including 3753 Cruithne that are co-orbital with Earth: their orbits bring them close to Earth for periods of time but then alter in the long term . These are quasi-satellites and not true moons. For more...
's surface to a resolution of 0.5 degrees, an ionization chamber
Ionization chamber
The ionization chamber is the simplest of all gas-filled radiation detectors, and is used for the detection or measurement of ionizing radiation...
to measure radiation in space, a diaphragm/microphone assembly to detect micrometeorites
Micrometeoroid
A micrometeoroid is a tiny meteoroid; a small particle of rock in space, usually weighing less than a gram. A micrometeor or micrometeorite is such a particle that enters the Earth's atmosphere or falls to Earth.-Scientific interest:...
, a spin-coil magnetometer
Magnetometer
A magnetometer is a measuring instrument used to measure the strength or direction of a magnetic field either produced in the laboratory or existing in nature...
to measure magnetic fields to 5 microgauss, and temperature-variable resistor
Resistor
A linear resistor is a linear, passive two-terminal electrical component that implements electrical resistance as a circuit element.The current through a resistor is in direct proportion to the voltage across the resistor's terminals. Thus, the ratio of the voltage applied across a resistor's...
s to record the spacecraft's internal conditions. The spacecraft was powered by nickel-cadmium batteries
Nickel-cadmium battery
The nickel–cadmium battery ' is a type of rechargeable battery using nickel oxide hydroxide and metallic cadmium as electrodes....
for ignition of the rockets, silver cell batteries
Silver-oxide battery
A silver oxide battery , not to be confused with a similar but different silver–zinc battery, which is a secondary cell, is a primary cell with relatively very high energy/weight ratio. They are costly due to the high price of silver...
for the television system, and mercury batteries
Mercury battery
A mercury battery is a non-rechargeable electrochemical battery, a primary cell. Due to the content of mercury, and the resulting environmental concerns, the sale of mercury batteries is banned in many countries. Both ANSI and IEC have withdrawn standards for mercury batteries...
for the remaining circuits. Radio transmission was at on 108.06 MHz through an electric dipole antenna for telemetry and doppler information at 300 mW and a magnetic dipole antenna for the television system at 50 W. Ground commands were received through the electric dipole antenna at 115 MHz. The spacecraft was spin-stabilized
Spin-stabilized satellite
A spin-stabilized satellite is a satellite which has the motion of one axis held fixed by spinning the satellite around that axis, using the gyroscopic effect.The attitude of a satellite or any rigid body is its orientation in space...
at 1.8 rps, the spin direction was approximately perpendicular to the geomagnetic meridian planes of the trajectory.

Due to a launch vehicle malfunction, the spacecraft attained only a ballistic trajectory and never reached the Moon
Moon
The Moon is Earth's only known natural satellite,There are a number of near-Earth asteroids including 3753 Cruithne that are co-orbital with Earth: their orbits bring them close to Earth for periods of time but then alter in the long term . These are quasi-satellites and not true moons. For more...
. However, it did return 43 hours of data on the near-Earth space environment.

The spacecraft was launched from LC-17A at 08:42:00 UTC on October 11, 1958 but it did not reach the Moon as planned due to a programming error in the upper stage causing a slight error in burnout velocity and angle (3.5 deg.). This resulted in a ballistic trajectory with a peak altitude of 113800 km (70,712 mi) around 13:00 local time. The real-time transmission was obtained for about 75% of the flight, but the percentage of data recorded for each experiment was variable. Except for the first hour of flight, the signal-to-noise ratio was good. The spacecraft ended transmission when it reentered the Earth's atmosphere after 43 hours of flight on October 13, 1958 at 03:46 UT over the South Pacific Ocean
Pacific Ocean
The Pacific Ocean is the largest of the Earth's oceanic divisions. It extends from the Arctic in the north to the Southern Ocean in the south, bounded by Asia and Australia in the west, and the Americas in the east.At 165.2 million square kilometres in area, this largest division of the World...
. A small quantity of useful scientific information was returned, showing the radiation surrounding Earth was in the form of bands and measuring the extent of the bands, mapping the total ionizing flux, making the first observations of hydromagnetic oscillations of the magnetic field
Magnetic field
A magnetic field is a mathematical description of the magnetic influence of electric currents and magnetic materials. The magnetic field at any given point is specified by both a direction and a magnitude ; as such it is a vector field.Technically, a magnetic field is a pseudo vector;...
, and taking the first measurements of the density of micrometeorites and the Interplanetary Magnetic Field
Interplanetary Magnetic Field
The interplanetary magnetic field is the term for the solar magnetic field carried by the solar wind among the planets of the Solar System....
.