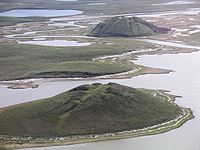 Pingo National Landmark is a natural area protecting eight pingo
Pingo
A pingo, also called a hydrolaccolith, is a mound of earth-covered ice found in the Arctic and subarctic that can reach up to in height and up to in diameter. The term originated as the Inuvialuktun word for a small hill. A pingo is a periglacial landform, which is defined as a nonglacial...
s near Tuktoyaktuk, Northwest Territories
Northwest Territories
The Northwest Territories is a federal territory of Canada.Located in northern Canada, the territory borders Canada's two other territories, Yukon to the west and Nunavut to the east, and three provinces: British Columbia to the southwest, and Alberta and Saskatchewan to the south...
. It is in a coastal region of the Arctic Ocean
Arctic Ocean
The Arctic Ocean, located in the Northern Hemisphere and mostly in the Arctic north polar region, is the smallest and shallowest of the world's five major oceanic divisions...
which contains approximately 1,350 Arctic ice dome hills—approximately one quarter of the world's pingos.

The Landmark comprises an area roughly 16 km² (6.2 sq mi), just 5 km (3.1 mi) west of Tuktoyaktuk, and includes Ibyuk pingo, Canada
Canada
Canada is a North American country consisting of ten provinces and three territories. Located in the northern part of the continent, it extends from the Atlantic Ocean in the east to the Pacific Ocean in the west, and northward into the Arctic Ocean...
's highest (and the world's second-highest), at 49 m (160.8 ft). The Landmark is managed by Parks Canada
Parks Canada
Parks Canada , also known as the Parks Canada Agency , is an agency of the Government of Canada mandated to protect and present nationally significant natural and cultural heritage, and foster public understanding, appreciation, and enjoyment in ways that ensure their ecological and commemorative...
within the national park system system, under the National Parks Act
National Parks Act (Canada)
The National Parks Act is a Canadian federal law that regulates protection of natural areas of national significance.-National parks:The act enables Parks Canada to designate and maintain national parks and national parks reserves. Within these, additional wildland areas may be designated...
. Although a nationwide Landmarks program was envisioned at its creation, Pingo remains the country's only National Landmark
National landmark
A National landmark is a site identified by a national authority as one possessing nationally–significant natural, historic, or scientific resources...
.

In a region near the Beaufort Sea
Beaufort Sea
The Beaufort Sea is a marginal sea of the Arctic Ocean, located north of the Northwest Territories, the Yukon, and Alaska, west of Canada's Arctic islands. The sea is named after hydrographer Sir Francis Beaufort...
which is quite flat, pingos dominate the skyline, rising from 5 to 36 m (16.4 to 118.1 ft), in various stages of growth and collapse. Ibyuk pingo, the highest, continues to grow about 2 cm (0.78740157480315 in) per year, and is estimated to be at least 1,000 years old. Unique to areas of permafrost
Permafrost
In geology, permafrost, cryotic soil or permafrost soil is soil at or below the freezing point of water for two or more years. Ice is not always present, as may be in the case of nonporous bedrock, but it frequently occurs and it may be in amounts exceeding the potential hydraulic saturation of...
, pingos have formed here thanks to numerous lakes in the Tuktoyaktuk Peninsula.

Besides pingos, the Landmark contains an excellent example of massive ice. One section of the frozen groundwater
Groundwater
Groundwater is water located beneath the ground surface in soil pore spaces and in the fractures of rock formations. A unit of rock or an unconsolidated deposit is called an aquifer when it can yield a usable quantity of water. The depth at which soil pore spaces or fractures and voids in rock...
, part of an eroded hillside by the sea, is over 500 m (1,640.4 ft) long, and 10 m (32.8 ft) high. Other less visible ice beds in the region are over 40 m (131.2 ft) thick. This type of ice is found in permafrost, and can be thousands of years old.

Other features of a permafrost environment can be found in the Landmark, including wedge ice
Ice wedge
An ice wedge is a crack in the ground formed by a narrow or thin piece of ice that measures up to 3-4 metres wide at ground level and extends downwards into the ground up to several metres. During the winter months, the water in the ground freezes and expands...
. These are vertical masses of ice that form after water freezes in the cracks around ground that has contracted due to extreme cold. When ice wedges connect to one another, they can form tundra polygons, which are also visible at Pingo National Landmark.

The area has been a focus of scientific study for over 50 years, and research here has formed the basis of current understanding about the origin and growth of pingos. The region was first identified as a site of national significance in 1978, and landmark status was proposed. Legislation creating it in 1984 is known as the Inuvialuit Final Agreement (officially, the Western Arctic (Inuvialuit) Claims Settlement Act (1984)). It provided for cooperative management of the Landmark between the Government of Canada
Government of Canada
The Government of Canada, formally Her Majesty's Government, is the system whereby the federation of Canada is administered by a common authority; in Canadian English, the term can mean either the collective set of institutions or specifically the Queen-in-Council...
, the Inuvialuit Land Administration, and the people of Tuktoyaktuk. It reserved subsurface rights for the Inuvialuit
Inuvialuit
The Inuvialuit or Western Canadian Inuit are Inuit people who live in the western Canadian Arctic region. They, like all other Inuit, are descendants of the Thule who migrated eastward from Alaska...
, federal jurisdiction for the surface, and that the pingos would be preserved unimpaired.

In August 2010 a boardwalk trail was completed with a boat launch, dock and viewing platforms; interpretive signage is planned by Parks Canada
Parks Canada
Parks Canada , also known as the Parks Canada Agency , is an agency of the Government of Canada mandated to protect and present nationally significant natural and cultural heritage, and foster public understanding, appreciation, and enjoyment in ways that ensure their ecological and commemorative...
for self-guided tours. Local tour operators provide guided access to the site, which is easiest by boat. Hiking provides a more challenging option, but no matter how visitors access the site, Arctic weather
Climate of the Arctic
The climate of the Arctic is characterized by long, cold winters and short, cool summers. There is a large amount of variability in climate across the Arctic, but all regions experience extremes of solar radiation in both summer and winter...
and varying water levels can force a change of plans and an alternate route of return.
The source of this article is wikipedia, the free encyclopedia.  The text of this article is licensed under the GFDL.