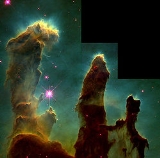 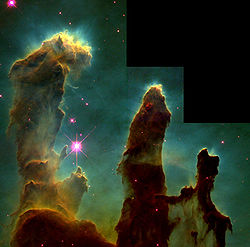 Pillars of Creation refers to a photograph taken by the Hubble Telescope of elephant trunks
Elephant trunks
Elephant Trunks are formations of interstellar matter found in space. They are located in O type and B type stars, which can form an expanding bubble known as an H II region. Elephant trunks look like massive pillars or columns of gas, but they come in various shapes, lengths, and colors...
of interstellar gas
Gas
Gas is one of the three classical states of matter . Near absolute zero, a substance exists as a solid. As heat is added to this substance it melts into a liquid at its melting point , boils into a gas at its boiling point, and if heated high enough would enter a plasma state in which the electrons...
and dust in the Eagle Nebula
Eagle Nebula
The Eagle Nebula is a young open cluster of stars in the constellation Serpens, discovered by Jean-Philippe de Cheseaux in 1745-46. Its name derives from its shape which is resemblant of an eagle...
, some 7,000 light years from Earth. It was taken April 1, 1995 and was named one of the top ten photographs from the Hubble by Space.com
Space.com
Space.com is a space and astronomy news website. Its stories are often syndicated to other media outlets, including CNN, MSNBC, Yahoo!, and USA Today.Space.com was founded by former CNN anchor Lou Dobbs and Rich Zahradnik, in July 1999...
. The astronomers responsible for the photo were Jeff Hester and Paul Scowen, at the time both of Arizona State University
Arizona State University
Arizona State University is a public research university located in the Phoenix Metropolitan Area of the State of Arizona...
.

The Pillars of Creation no longer exist. In 2007, astronomers announced that they were destroyed about 6,000 years ago by the shock wave
Shock wave
A shock wave is a type of propagating disturbance. Like an ordinary wave, it carries energy and can propagate through a medium or in some cases in the absence of a material medium, through a field such as the electromagnetic field...
from a supernova
Supernova
A supernova is a stellar explosion that is more energetic than a nova. It is pronounced with the plural supernovae or supernovas. Supernovae are extremely luminous and cause a burst of radiation that often briefly outshines an entire galaxy, before fading from view over several weeks or months...
. Because of the limited speed of light
Speed of light
The speed of light in vacuum, usually denoted by c, is a physical constant important in many areas of physics. Its value is 299,792,458 metres per second, a figure that is exact since the length of the metre is defined from this constant and the international standard for time...
, the shock wave's approach to the pillars can currently be seen from Earth, but their actual destruction will not be visible for another millennium
Millennium
A millennium is a period of time equal to one thousand years —from the Latin phrase , thousand, and , year—often but not necessarily related numerically to a particular dating system....
.

The pillars were composed of cool molecular hydrogen and dust that were being eroded away by photoevaporation from the ultraviolet
Ultraviolet
Ultraviolet light is electromagnetic radiation with a wavelength shorter than that of visible light, but longer than X-rays, in the range 10 nm to 400 nm, and energies from 3 eV to 124 eV...
light of relatively close and hot stars. The leftmost pillar was about four light years in length. The finger-like protrusions at the top of the clouds were larger than our solar system
Solar System
The Solar System consists of the Sun and the astronomical objects gravitationally bound in orbit around it, all of which formed from the collapse of a giant molecular cloud approximately 4.6 billion years ago. The vast majority of the system's mass is in the Sun...
, and were made visible by the shadows of Evaporating Gaseous Globules
Evaporating gaseous globule
Evaporating Gaseous Globules, or EGGs, are dense centers of hydrogen gas and dust that act as incubators for new stars.- External links :* — ESA/NASA Image...
(EGGs), which shielded the gas behind them from intense UV flux. EGGs are themselves incubators of new stars.

Hubble's photo of the pillars is composed of 32 different images from four separate cameras in the Wide Field and Planetary Camera 2
Wide Field and Planetary Camera 2
The Wide Field and Planetary Camera 2 is a baby grand piano sized camera built by the Jet Propulsion Laboratory and formerly installed on the Hubble Space Telescope. It was installed by servicing mission 1 in 1993, replacing the telescope's original Wide Field and Planetary Camera...
on board Hubble. The photograph was made with light emitted by different elements
Chemical element
A chemical element is a pure chemical substance consisting of one type of atom distinguished by its atomic number, which is the number of protons in its nucleus. Familiar examples of elements include carbon, oxygen, aluminum, iron, copper, gold, mercury, and lead.As of November 2011, 118 elements...
in the cloud and appears as a different colour in the composite image: green for hydrogen
Hydrogen
Hydrogen is the chemical element with atomic number 1. It is represented by the symbol H. With an average atomic weight of , hydrogen is the lightest and most abundant chemical element, constituting roughly 75% of the Universe's chemical elemental mass. Stars in the main sequence are mainly...
, red for singly ionized sulphur and blue for double-ionized oxygen
Oxygen
Oxygen is the element with atomic number 8 and represented by the symbol O. Its name derives from the Greek roots ὀξύς and -γενής , because at the time of naming, it was mistakenly thought that all acids required oxygen in their composition...
atoms.

The missing part of the picture at the top right corner originates from the fact that one of the four cameras has a magnified view of its portion. This allows astronomers to see finer detail. Thus the images from this camera are scaled down in size proportionally to match the other three cameras.
The source of this article is wikipedia, the free encyclopedia.  The text of this article is licensed under the GFDL.