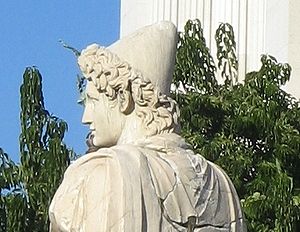 The pileus — also pilleus or pilleum — was a cap worn by sailors in Ancient Greece
Ancient Greece
Ancient Greece is a civilization belonging to a period of Greek history that lasted from the Archaic period of the 8th to 6th centuries BC to the end of antiquity. Immediately following this period was the beginning of the Early Middle Ages and the Byzantine era. Included in Ancient Greece is the...
(where it was the pilos or pilidion) and later copied by Ancient Rome
Ancient Rome
Ancient Rome was a thriving civilization that grew on the Italian Peninsula as early as the 8th century BC. Located along the Mediterranean Sea and centered on the city of Rome, it expanded to one of the largest empires in the ancient world....
. It was a brimless, felt
Felt
Felt is a non-woven cloth that is produced by matting, condensing and pressing woollen fibres. While some types of felt are very soft, some are tough enough to form construction materials. Felt can be of any colour, and made into any shape or size....
cap, somewhat similar to a fez
Fez (clothing)
The fez , or tarboosh is a felt hat either in the shape of a red truncated cone or in the shape of a short cylinder made of kilim fabric. Both usually have tassels...
. The pilleolus was a smaller version, similar to a skullcap.

The pileus was especially associated with the manumission
Manumission
Manumission is the act of a slave owner freeing his or her slaves. In the United States before the passage of the Thirteenth Amendment to the United States Constitution, which abolished most slavery, this often happened upon the death of the owner, under conditions in his will.-Motivations:The...
of slaves who wore it upon their liberation. It became emblematic of liberty
Liberty
Liberty is a moral and political principle, or Right, that identifies the condition in which human beings are able to govern themselves, to behave according to their own free will, and take responsibility for their actions...
and freedom from bondage. During the classic revival of the 18th and 19th centuries it was widely confused with the Phrygian cap
Phrygian cap
The Phrygian cap is a soft conical cap with the top pulled forward, associated in antiquity with the inhabitants of Phrygia, a region of central Anatolia. In the western provinces of the Roman Empire it came to signify freedom and the pursuit of liberty, perhaps through a confusion with the pileus,...
which, in turn, appeared frequently on statuary and heraldic devices as a "liberty cap.".

In Albania (part of ancient Illyria
Illyria
In classical antiquity, Illyria was a region in the western part of the Balkan Peninsula inhabited by the Illyrians....
) a similar cap was carried by all men of the region. This cap is called "plis" and even nowadays can be found in the regions inhabited by Albanians, mainly Albania
Albania
Albania , officially known as the Republic of Albania , is a country in Southeastern Europe, in the Balkans region. It is bordered by Montenegro to the northwest, Kosovo to the northeast, the Republic of Macedonia to the east and Greece to the south and southeast. It has a coast on the Adriatic Sea...
, Kosovo, FYR of Macedonia.

The pilos (Greek: πῖλος, felt
Felt
Felt is a non-woven cloth that is produced by matting, condensing and pressing woollen fibres. While some types of felt are very soft, some are tough enough to form construction materials. Felt can be of any colour, and made into any shape or size....
) was a common conical travelling hat in Ancient Greece
Ancient Greece
Ancient Greece is a civilization belonging to a period of Greek history that lasted from the Archaic period of the 8th to 6th centuries BC to the end of antiquity. Immediately following this period was the beginning of the Early Middle Ages and the Byzantine era. Included in Ancient Greece is the...
. The pilos is the brimless version of the petasos
Petasos
A petasos or petasus is a sun hat of Thessalian origin worn by the ancient Greeks, often in combination with the chlamys cape. It was usually made of wool felt, leather or straw, with a broad, floppy brim. It was worn primarily by farmers and travellers, and was considered characteristic of rural...
. It could be made of felt or leather. Their pilos cap identifies the Dioscuri, Castor and Pollux
Castor and Pollux
In Greek and Roman mythology, Castor and Pollux or Polydeuces were twin brothers, together known as the Dioscuri . Their mother was Leda, but Castor was the mortal son of Tyndareus, king of Sparta, and Pollux the divine son of Zeus, who visited Leda in the guise of a swan...
, in sculptures, bas-reliefs and vase-paintings; their caps were already explained in Antiquity as the remnants of the egg from which they hatched. The pilos appears on votive figurines of boys at the sanctuary of the kabeiri at Thebes
Thebes, Greece
Thebes is a city in Greece, situated to the north of the Cithaeron range, which divides Boeotia from Attica, and on the southern edge of the Boeotian plain. It played an important role in Greek myth, as the site of the stories of Cadmus, Oedipus, Dionysus and others...
, the Kabeirion.

In warfare, the pilos was often worn by the peltast
Peltast
A peltast was a type of light infantry in Ancient Thrace who often served as skirmishers.-Description:Peltasts carried a crescent-shaped wicker shield called pelte as their main protection, hence their name. According to Aristotle the pelte was rimless and covered in goat or sheep skin...
light infantry, in conjunction with the exomis
Exomis
The exomis was a Greek tunic used by workers and light infantry. The tunic largely replaced the older chitoniskos as the main tunic of the hoplites during the later 5th century BC...
. The pilos cap was sometimes worn under the helmet by hoplites, but usually they preferred to not use a helmet along with the cap before the 5th century for reasons of mobility.

The pilos helmet was made in the same shape as the original cap. It probably originated from Lakonia and was made from bronze
Bronze
Bronze is a metal alloy consisting primarily of copper, usually with tin as the main additive. It is hard and brittle, and it was particularly significant in antiquity, so much so that the Bronze Age was named after the metal...
. The pilos helmet was extensively adopted by the Spartan army in the fifth century BC and worn by them until the end of the Classical era.

In Ancient Rome, a slave was freed by a master in a ceremony that included placing the pileus on the former slave’s shaved head. This was a form of extra-legal manumission (the manumissio minus justa) considered less legally sound than manumission in a court of law.

Among the Romans the cap of felt was the emblem of liberty. When a slave obtained his freedom he had his head shaved, and wore instead of his hair an undyed pileus (πίλεον λευκόν, Diodorus Siculus
Diodorus Siculus
Diodorus Siculus was a Greek historian who flourished between 60 and 30 BC. According to Diodorus' own work, he was born at Agyrium in Sicily . With one exception, antiquity affords no further information about Diodorus' life and doings beyond what is to be found in his own work, Bibliotheca...
Exc. Leg. 22 p. 625, ed. Wess.; Plaut.
Plautus
Titus Maccius Plautus , commonly known as "Plautus", was a Roman playwright of the Old Latin period. His comedies are the earliest surviving intact works in Latin literature. He wrote Palliata comoedia, the genre devised by the innovator of Latin literature, Livius Andronicus...
Amphit. I.1.306; Persius, V.82). Hence the phrase servos ad pileum vocare is a summons to liberty, by which slaves were frequently called upon to take up arms with a promise of liberty (Liv.
Livy
Titus Livius — known as Livy in English — was a Roman historian who wrote a monumental history of Rome and the Roman people. Ab Urbe Condita Libri, "Chapters from the Foundation of the City," covering the period from the earliest legends of Rome well before the traditional foundation in 753 BC...
XXIV.32). The figure of Liberty on some of the coins of Antoninus Pius
Antoninus Pius
Antoninus Pius , also known as Antoninus, was Roman Emperor from 138 to 161. He was a member of the Nerva-Antonine dynasty and the Aurelii. He did not possess the sobriquet "Pius" until after his accession to the throne...
, struck A.D. 145, holds this cap in the right hand.

The University of Sussex
University of Sussex
The University of Sussex is an English public research university situated next to the East Sussex village of Falmer, within the city of Brighton and Hove. The University received its Royal Charter in August 1961....
specifies a pileus-style cap as its doctoral cap in its academic dress
Academic dress
Academic dress or academical dress is a traditional form of clothing for academic settings, primarily tertiary education, worn mainly by those that have been admitted to a university degree or hold a status that entitles them to assume them...
. It has a cylindical shape and is made of black velvet. There is a corded silk button at the centre of the apex: light blue for PhD
PHD
PHD may refer to:*Ph.D., a doctorate of philosophy*Ph.D. , a 1980s British group*PHD finger, a protein sequence*PHD Mountain Software, an outdoor clothing and equipment company*PhD Docbook renderer, an XML renderer...
s, gamboge
Gamboge
Gamboge is a partially transparent dark mustard yellow pigment.Other forms and spellings are: cambodia, cambogium, camboge, cambugium, gambaugium, gambogia, gambozia, gamboidea, gambogium, gumbouge, gambouge, gamboge, gambooge, gambugia...
for higher doctorates.