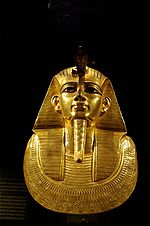 Montet first began his studies under Victor Loret
Victor Loret
Victor Clement Georges Philippe Loret was a French Egyptologist.-Biography:Loret studied with Gaston Maspero at the École des Hautes Études. In 1897 he became the head of the Egyptian Antiquities Service. In March 1898, he discovered KV35, the tomb of Amenhotep II in the Valley of the Kings...
at the University of Lyon
Lyon
Lyon , is a city in east-central France in the Rhône-Alpes region, situated between Paris and Marseille. Lyon is located at from Paris, from Marseille, from Geneva, from Turin, and from Barcelona. The residents of the city are called Lyonnais....
.

In the 1939-1940 Egypt excavation season, he discovered the completely intact tombs of 3 Egyptian pharaohs at Tanis: Psusennes I
Psusennes I
Psusennes I, or Greek Ψουσέννης], Pasibkhanu or Hor-Pasebakhaenniut I Egyptian ḥor-p3-sib3-ḫˁỉ--niwt] was the third king of the Twenty-first dynasty of Egypt who ruled from Tanis between 1047 – 1001 BC...
, Amenemope, and Shoshenq II
Shoshenq II
Heqakheperre Shoshenq II was an Egyptian king of the 22nd dynasty of Egypt. He was the only ruler of this Dynasty whose tomb was not plundered by tomb robbers. His final resting place was discovered within Psusennes I's tomb at Tanis by Pierre Montet in 1939. Montet removed the coffin lid of...
along with the partially plundered tomb of Takelot I
Takelot I
Hedjkheperre Setepenre Takelot I was a son of Osorkon I and Queen Tashedkhons who ruled Egypt for 13 Years according to Manetho. Takelot would marry Queen Kapes who bore him Osorkon II...
in Lower Egypt at Tanis. The latter tomb contained a gold bracelet of Osorkon I
Osorkon I
The son of Shoshenq I and his chief consort, Karomat A, Osorkon I was the second king of Egypt's 22nd Dynasty and ruled around 922 BC – 887 BC. He succeeded his father Shoshenq I who probably died within a year of his successful 923 BC campaign against the kingdoms of Israel and Judah...
, Takelot's father, as well as a heart scarab. He also found the fully plundered tomb of Osorkon II
Osorkon II
Usermaatre Setepenamun Osorkon II was a pharaoh of the Twenty-second Dynasty of Ancient Egypt and the son of Takelot I and Queen Kapes. He ruled Egypt around 872 BC to 837 BC from Tanis, the capital of this Dynasty. After succeeding his father, he was faced with the competing rule of his cousin,...
as well as the partly plundered tomb of this king's son, Prince Hornakht
Hornakht
Prince Hornakht was the son of pharaoh Osorkon II. He was appointed by Osorkon II to the office of chief priest of Amun at Tanis to strengthen this king's authority in Lower Egypt...
. The start of World War II
World War II
World War II, or the Second World War , was a global conflict lasting from 1939 to 1945, involving most of the world's nations—including all of the great powers—eventually forming two opposing military alliances: the Allies and the Axis...
in Western Europe in May 1940 stopped all excavation work at Tanis. However, after the war, Montet resumed his activities at Tanis and proceeded to uncover the intact tomb of General Wendebauendjed, (literally the Commander-in-Chief of the Army) who served under Psusennes I, in 1946.

Montet believed that his excavations at Tanis
Tanis
Tanis was the capital of the 21st and 22nd dynasties of ancient Egypt, and is now an archaeological temple site. The word Tanis can also refer to:*Tanis, a little girl mummy in Scooby-Doo and the Ghoul School...
had uncovered Pi-Ramesses
Pi-Ramesses
Pi-Ramesses was the new capital built by the Nineteenth Dynasty of Egypt Pharaoh Ramesses II at Qantir near the old site of Avaris. The city had previously served as a summer palace under Seti I and may have been originally founded by Ramesses I Pi-Ramesses (Pi-Ramesses Aa-nakhtu, meaning...
. After his death, Austrian Egyptologist Manfred Bietak
Manfred Bietak
Manfred Bietak is an Austrian archaeologist. He is Professor emeritus of Egyptology at the University of Vienna and Director of the Austrian Archaeological Institute in Cairo 1973-2009...
discovered that although Montet had discovered Pi-Ramesses stonework at Tanis, the true location of the ancient city lay some 30 km to the south. Montet can be credited, however, as the discoverer of the "transplanted" city of Pi-Ramesses.