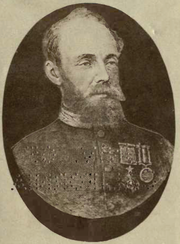 Sir Pierre Louis Napoleon Cavagnari KCB
Order of the Bath
The Most Honourable Order of the Bath is a British order of chivalry founded by George I on 18 May 1725. The name derives from the elaborate mediæval ceremony for creating a knight, which involved bathing as one of its elements. The knights so created were known as Knights of the Bath...
CSI
Order of the Star of India
The Most Exalted Order of the Star of India is an order of chivalry founded by Queen Victoria in 1861. The Order includes members of three classes:# Knight Grand Commander # Knight Commander # Companion...
(1841–1879), British
British Empire
The British Empire comprised the dominions, colonies, protectorates, mandates and other territories ruled or administered by the United Kingdom. It originated with the overseas colonies and trading posts established by England in the late 16th and early 17th centuries. At its height, it was the...
military administrator, was the son of Count Louis Adolphus Cavagnari, of an old Italian family from Parma
Parma
Parma is a city in the Italian region of Emilia-Romagna famous for its ham, its cheese, its architecture and the fine countryside around it. This is the home of the University of Parma, one of the oldest universities in the world....
in the service of the Bonaparte
Bonaparte
The House of Bonaparte is an imperial and royal European dynasty founded by Napoleon I of France in 1804, a French military leader who rose to notability out of the French Revolution and transformed the French Republic into the First French Empire within five years of his coup d'état...
family, by his marriage in 1837 with an Irish
Ireland
Ireland is an island to the northwest of continental Europe. It is the third-largest island in Europe and the twentieth-largest island on Earth...
lady, Caroline Lyons-Montgomery. Cavagnari was born at Stenay
Stenay
Stenay is a commune in the Meuse department in Lorraine in north-eastern France.It was one of the last villages to experience fighting during World War I. Stenay was captured on 11 November 1918 by the American 89th Division under General William M. Wright only hours before the Armistice went into...
, in the Meuse
Meuse
Meuse is a department in northeast France, named after the River Meuse.-History:Meuse is one of the original 83 departments created during the French Revolution on March 4, 1790...
département, France
France
The French Republic , The French Republic , The French Republic , (commonly known as France , is a unitary semi-presidential republic in Western Europe with several overseas territories and islands located on other continents and in the Indian, Pacific, and Atlantic oceans. Metropolitan France...
, on July 4, 1841.

He nevertheless obtained naturalization
Naturalization
Naturalization is the acquisition of citizenship and nationality by somebody who was not a citizen of that country at the time of birth....
as a British citizen
British people
The British are citizens of the United Kingdom, of the Isle of Man, any of the Channel Islands, or of any of the British overseas territories, and their descendants...
, and entered the military service of the East India Company
British East India Company
The East India Company was an early English joint-stock company that was formed initially for pursuing trade with the East Indies, but that ended up trading mainly with the Indian subcontinent and China...
. After passing through college at the Addiscombe Military Academy
Addiscombe Military Academy
The East India Company Military Seminary, colloquially known as Addiscombe Seminary, Addiscombe College, or Addiscombe Military Academy was a British military academy at Addiscombe, Surrey, in what is now the London Borough of Croydon. It was established in 1809, and closed in 1861...
, he served through the Oudh
Awadh
Awadh , also known in various British historical texts as Oudh or Oude derived from Ayodhya, is a region in the centre of the modern Indian state of Uttar Pradesh, which was before independence known as the United Provinces of Agra and Oudh...
campaign against the mutineers in 1858 and 1859. In 1861 he was appointed an assistant commissioner in the Punjab region
Punjab region
The Punjab , also spelled Panjab |water]]s"), is a geographical region straddling the border between Pakistan and India which includes Punjab province in Pakistan and the states of the Punjab, Haryana, Himachal Pradesh, Chandigarh and some northern parts of the National Capital Territory of Delhi...
of British India, and in
1877 became deputy commissioner of Peshawar
Peshawar
Peshawar is the capital of Khyber-Pakhtunkhwa and the administrative center and central economic hub for the Federally Administered Tribal Areas of Pakistan....
(now in Pakistan
Pakistan
Pakistan , officially the Islamic Republic of Pakistan is a sovereign state in South Asia. It has a coastline along the Arabian Sea and the Gulf of Oman in the south and is bordered by Afghanistan and Iran in the west, India in the east and China in the far northeast. In the north, Tajikistan...
) and took part in several expeditions against the Pashtun tribes
Pashtun tribes
The Pashtun people are the largest ethnic group in Afghanistan and the second largest in Pakistan. Pashtun, tribes are divided into four supertribal confederacies: the Arbanee , Betanee , Gharghasht, and Karlanee .Traditionally, according to folklore, all Pashtuns are said to have descended, at...
. 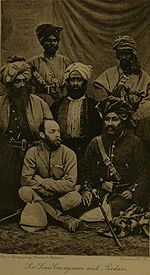 In September 1878 he was attached to the staff of a British mission to Kabul
Kabul
Kabul , spelt Caubul in some classic literatures, is the capital and largest city of Afghanistan. It is also the capital of the Kabul Province, located in the eastern section of Afghanistan...
, Afghanistan
Afghanistan
Afghanistan , officially the Islamic Republic of Afghanistan, is a landlocked country located in the centre of Asia, forming South Asia, Central Asia and the Middle East. With a population of about 29 million, it has an area of , making it the 42nd most populous and 41st largest nation in the world...
, which the Afghans
Demography of Afghanistan
The population of Afghanistan is around 29,835,392 as of the year 2011, which is unclear if the refugees living outside the country are included or not. The nation is composed of a multi-ethnic and multi-lingual society, reflecting its location astride historic trade and invasion routes between...
refused to allow to proceed through the Khyber Pass
Khyber Pass
The Khyber Pass, is a mountain pass linking Pakistan and Afghanistan.The Pass was an integral part of the ancient Silk Road. It is mentioned in the Bible as the "Pesh Habor," and it is one of the oldest known passes in the world....
. In May 1879, after the British-Indian forces had invaded Afghanistan
Second Anglo-Afghan War
The Second Anglo-Afghan War was fought between the United Kingdom and Afghanistan from 1878 to 1880, when the nation was ruled by Sher Ali Khan of the Barakzai dynasty, the son of former Emir Dost Mohammad Khan. This was the second time British India invaded Afghanistan. The war ended in a manner...
, and the death of Afghan Emir
Emir
Emir , meaning "commander", "general", or "prince"; also transliterated as Amir, Aamir or Ameer) is a title of high office, used throughout the Muslim world...
Sher Ali Khan
Sher Ali Khan
Sher Ali Khan was Amir of Afghanistan from 1863 to 1866 and from 1868 until his death in 1879. He was the third son of Dost Mohammed Khan, founder of the Barakzai Dynasty in Afghanistan....
, Cavagnari negotiated and signed the Treaty of Gandamak
Treaty of Gandamak
The Treaty of Gandamak officially ended the first phase of the Second Anglo-Afghan War. Afghanistan ceded various frontier areas to Britain to prevent invasion of further areas of the country....
with Sher Ali Khan's son and successor, Mohammad Yaqub Khan
Mohammad Yaqub Khan
Mohammad Yaqub Khan was Emir of Afghanistan from February 21 to October 12, 1879. He was the son of the previous ruler, Sher Ali Khan....
. With this treaty, the Afghans agreed to admit a British representative to Kabul, and the post was conferred on Cavagnari, who also received the Star of India
Order of the Star of India
The Most Exalted Order of the Star of India is an order of chivalry founded by Queen Victoria in 1861. The Order includes members of three classes:# Knight Grand Commander # Knight Commander # Companion...
and was made a KCB
Order of the Bath
The Most Honourable Order of the Bath is a British order of chivalry founded by George I on 18 May 1725. The name derives from the elaborate mediæval ceremony for creating a knight, which involved bathing as one of its elements. The knights so created were known as Knights of the Bath...
. He took up his residence in July 1879. On September 3, 1879, Cavagnari and the other European members of the mission, along with their guards who were made up of The Guides
Corps of Guides (British India)
The Corps of Guides was a regiment of the British Indian Army which served in the North West Frontier and had a unique composition of being part infantry and part cavalry.-History:...
, were killed after he refused the demands of mutinous Afghan troops. Cavagnari was survived by his wife, Lady Cavagnari (née Mercy Ellen Graves), whom he had married in 1871. 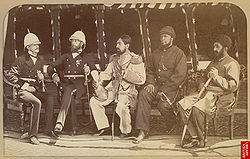