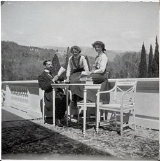 Encyclopedia
Pierre Gilliard was a Swiss academic, who was French language
French language
French is a Romance language spoken as a first language in France, the Romandy region in Switzerland, Wallonia and Brussels in Belgium, Monaco, the regions of Quebec and Acadia in Canada, and by various communities elsewhere. Second-language speakers of French are distributed throughout many parts...
tutor to the five children of Tsar Nicholas II from 1905 to 1918. Years after the Imperial Family was assassinated
Shooting of the Romanov family
The shooting of the Romanov family, of the Russian Imperial House of Romanov, and those who chose to accompany them into exile, Dr. Eugene Botkin, Anna Demidova, Alexei Trupp, and Ivan Kharitonov, took place in Yekaterinburg on July 17, 1918 on the orders of Vladimir Lenin, Yakov Sverdlov, and the...
by the Bolsheviks in July 1918, Gilliard wrote a book Thirteen Years at the Russian Court, about his time with the family. In his memoirs, Gilliard described Tsarina Alexandra's torment over her son's
Tsarevich Alexei Nikolaevich of Russia
Alexei Nikolaevich of the House of Romanov, was the Tsesarevich and heir apparent to the throne of the Russian Empire. In English, his title is usually given as Tsarevich, a title that has a separate meaning in Russia. Alexei was the youngest child and only son of Emperor Nicholas II and Empress...
haemophilia
Haemophilia
Haemophilia is a group of hereditary genetic disorders that impair the body's ability to control blood clotting or coagulation, which is used to stop bleeding when a blood vessel is broken. Haemophilia A is the most common form of the disorder, present in about 1 in 5,000–10,000 male births...
and her faith in the ability of starets
Starets
A starets is an elder of a Russian Orthodox monastery who functions as venerated adviser and teacher. Elders or spiritual fathers are charismatic spiritual leaders whose wisdom stems from God as obtained from ascetic experience...
Grigori Rasputin
Grigori Rasputin
Grigori Yefimovich Rasputin was a Russian Orthodox Christian and mystic who is perceived as having influenced the latter days of the Russian Emperor Nicholas II, his wife Alexandra, and their only son Alexei...
to heal the boy.

In his memoirs, Gilliard wrote that he initially came to Russia in 1904 as a French tutor to the family of Duke George of Leuchtenberg, a cousin of the Romanov family. He was recommended as a French tutor to the Tsar's children and began teaching the elder children, Grand Duchesses Olga
Grand Duchess Olga Nikolaevna of Russia
Grand Duchess Olga Nikolaevna of Russia ; , November 16 after 1900 – July 17, 1918) was the eldest daughter of the last autocratic ruler of the Russian Empire, Emperor Nicholas II, and of Empress Alexandra of Russia....
and Tatiana Nikolaevna of Russia
Grand Duchess Tatiana Nikolaevna of Russia
Grand Duchess Tatiana Nikolaevna of Russia , , was the second daughter of Tsar Nicholas II, the last monarch of Russia, and of Tsarina Alexandra...
in 1905. He grew fond of the family and followed them into internal exile at Tobolsk
Tobolsk
Tobolsk is a town in Tyumen Oblast, Russia, located at the confluence of the Tobol and Irtysh Rivers. It is a historic capital of Siberia. Population: -History:...
, Siberia
Siberia
Siberia is an extensive region constituting almost all of Northern Asia. Comprising the central and eastern portion of the Russian Federation, it was part of the Soviet Union from its beginning, as its predecessor states, the Tsardom of Russia and the Russian Empire, conquered it during the 16th...
, following the Russian Revolution of 1917
Russian Revolution of 1917
The Russian Revolution is the collective term for a series of revolutions in Russia in 1917, which destroyed the Tsarist autocracy and led to the creation of the Soviet Union. The Tsar was deposed and replaced by a provisional government in the first revolution of February 1917...
. The Bolsheviks prevented Gilliard from joining his pupils when they were moved to the Ipatiev House in Ekaterinburg in May 1918. He described his final view of the children in his memoirs:

Gilliard remained in Siberia after the murders of the family, assisting White Russian
White movement
The White movement and its military arm the White Army - known as the White Guard or the Whites - was a loose confederation of Anti-Communist forces.The movement comprised one of the politico-military Russian forces who fought...
investigator Nicholas Sokolov. He married Alexandra "Shura" Tegleva, who had been a nurse to Grand Duchess Anastasia Nikolaevna of Russia
Grand Duchess Anastasia Nikolaevna of Russia
Grand Duchess Anastasia Nikolaevna of Russia was the youngest daughter of Tsar Nicholas II of Russia, the last sovereign of Imperial Russia, and his wife Alexandra Fyodorovna....
, in 1919. In Siberia, he was instrumental in unmasking an impostor who claimed to be the Tsarevich Alexei
Tsarevich Alexei Nikolaevich of Russia
Alexei Nikolaevich of the House of Romanov, was the Tsesarevich and heir apparent to the throne of the Russian Empire. In English, his title is usually given as Tsarevich, a title that has a separate meaning in Russia. Alexei was the youngest child and only son of Emperor Nicholas II and Empress...
. In 1920, he returned to Switzerland from the Russian Far East
Russian Far East
Russian Far East is a term that refers to the Russian part of the Far East, i.e., extreme east parts of Russia, between Lake Baikal in Eastern Siberia and the Pacific Ocean...
. He became a French professor at the University of Lausanne
University of Lausanne
The University of Lausanne in Lausanne, Switzerland was founded in 1537 as a school of theology, before being made a university in 1890. Today about 12,000 students and 2200 researchers study and work at the university...
and was awarded the French Legion of Honor. In 1921, he published a book entitled Le Tragique Destin de Nicholas II et de sa famille, which described the last days of the Tsar and his family, and the subsequent investigation into their deaths.

In 1925, the Tsar's sister, Grand Duchess Olga Alexandrovna of Russia
Grand Duchess Olga Alexandrovna of Russia
Grand Duchess Olga Alexandrovna of Russia was the youngest child of Emperor Alexander III of Russia. Her older brother was Tsar Nicholas II....
, asked Gilliard and his wife to investigate the case of Anna Anderson
Anna Anderson
Anna Anderson was the best known of several impostors who claimed to be Grand Duchess Anastasia of Russia...
, who claimed to be Grand Duchess Anastasia. On 27 July 1925, the Gilliards saw Anderson at St. Mary's Hospital in Berlin
Berlin
Berlin is the capital city of Germany and is one of the 16 states of Germany. With a population of 3.45 million people, Berlin is Germany's largest city. It is the second most populous city proper and the seventh most populous urban area in the European Union...
, where Anderson was being treated for a tubercular infection of her arm. Anderson was severely ill, and semi-conscious. Madame Gilliard asked to examine Anderson's feet, and noted that Anderson's feet were shaped similarly to Anastasia's: both had bunion
Bunion
A bunion is a deformity characterized by lateral deviation of the great toe, often erroneously described as an enlargement of bone or tissue around the joint at the head of the big toe...
s. Gilliard insisted that Anderson be moved to a better hospital, to ensure her survival while her identity was investigated. After an operation on Anderson's arm, she recuperated at the Mommsen Nursing Home in Berlin. There, in October 1925, the Gilliards saw Anderson again. Anderson did not recognise Gilliard, which she later claimed was because he had shaved off his goatee
Goatee
Goatee refers to a style of facial hair incorporating hair on a man’s chin. The exact nature of the style has varied according to time and culture.Traditionally, goatee refers solely to a beard formed by a tuft of hair on the chin...
beard. When he asked her to "tell me everything about your past", she refused. According to Gilliard, Anderson mistook Shura for Grand Duchess Olga on the second day of their visit. At a subsequent meeting, Anderson mimicked the actions of Anastasia when she asked Shura to moisten her forehead with eau de Cologne
Eau de Cologne
Eau de Cologne or simply Cologne is a toiletry, a perfume in a style that originated from Cologne, Germany. It is nowadays a generic term for scented formulations in typical concentration of 2-5% essential oils. However as of today cologne is a blend of extracts, alcohol, and water...
, which left Shura shaken.

Anderson's supporters claimed that the Gilliards recognized Anderson as Anastasia, while the Gilliards denied it, and said her supporters mistook their compassion for recognition. Anderson's friend and lifelong supporter, Harriet von Rathlef
Harriet von Rathlef
Harriet Ellen Siderowna von Rathlef-Keilmann, , was a Latvian-born sculptor and writer of children's books who escaped to Germany from the Baltic provinces following the Russian Revolution of 1917....
, wrote that she spotted Gilliard in the hallway, looking agitated, and muttering in French, "My God, how awful! What has become of Grand Duchess Anastasia? She's a wreck, a complete wreck! I want to do everything I can to help the Grand Duchess!" Shura cried when she left Anderson, wondering why she loved the woman as much as she loved the grand duchess. On departure from the hospital, Gilliard told the Danish Ambassador in Berlin, Herluf Zahle
Herluf Zahle
Herluf Zahle was a Danish barrister with the Supreme Court, a career diplomat and the President of the League of Nations from 1928 to 1929.- References :* at Dansk Biografisk Haandleksikon...
, that, "We are going away without being able to say that she is not Grand Duchess Anastasia." Gilliard later wrote to von Rathlef making further enquiries about Anderson's health, though he referred to her as "the invalid" rather than "Anastasia". By the beginning of 1926, however, Gilliard was clearly of the opinion that Anderson was an impostor.

While supporters of Anderson insisted that the Gilliards recognized her as Anastasia and then recanted, possibly the couple were hesitant at first because her emaciated condition made her look so different from the plump teenage Anastasia they had last seen. While this was enough to suspend their initial doubts, they eventually decided, once she was better and they could question her more closely, that she was an impostor. Anderson's supporters accused Gilliard of turning his back on her because he was paid off by the Tsarina's brother, Ernest Louis, Grand Duke of Hesse
Ernest Louis, Grand Duke of Hesse
Ernest Louis Charles Albert William , was the last Grand Duke of Hesse and by Rhine from 1892 until 1918...
.

Like Ernest Louis, Gilliard became a vociferous opponent of Anderson and her circle. Gilliard wrote articles and a book entitled The False Anastasia, which claimed she was a "vulgar adventuress" and a "first-rate actress". He said that he had known at once she was not Anastasia, that there was no facial resemblance, that her entire knowledge of Russian imperial life was gleaned from magazines, books and her friends, and that she could not speak Russian, English or French. He testified against her in Hamburg in 1958. The lawsuits, designed to determine whether she was truly the grand duchess, eventually ended inconclusively in 1970, after Gilliard's death.

Shortly after his testimony, Gilliard was severely injured in a car accident in Lausanne
Lausanne
Lausanne is a city in Romandy, the French-speaking part of Switzerland, and is the capital of the canton of Vaud. The seat of the district of Lausanne, the city is situated on the shores of Lake Geneva . It faces the French town of Évian-les-Bains, with the Jura mountains to its north-west...
. He never fully recovered and died four years later. Decades later, in 1995, DNA tests proved that Anderson was not Anastasia.