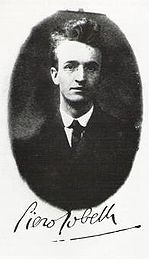 Piero Gobetti (ˈpjɛːro ɡoˈbetti; Turin, June 19, 1901 – Paris, February 15, 1926) was an Italian journalist, intellectual
Intellectual
An intellectual is a person who uses intelligence and critical or analytical reasoning in either a professional or a personal capacity.- Terminology and endeavours :"Intellectual" can denote four types of persons:...
and radical liberal and anti-fascist. He was an exceptionally active campaigner and critic in the crisis years in Italy after the First World War and into the early years of Fascist
National Fascist Party
The National Fascist Party was an Italian political party, created by Benito Mussolini as the political expression of fascism...
rule.

A student of law
Law
Law is a system of rules and guidelines which are enforced through social institutions to govern behavior, wherever possible. It shapes politics, economics and society in numerous ways and serves as a social mediator of relations between people. Contract law regulates everything from buying a bus...
at the University of Turin
University of Turin
The University of Turin is a university in the city of Turin in the Piedmont region of north-western Italy...
, he set up his own review Energie Nove ('New Energies') in 1918. There he promoted the cause of radical cultural and political renewal, aligning himself with the many critics of liberal parliamentary politics. Drawing upon the idealist philosophy of Benedetto Croce
Benedetto Croce
Benedetto Croce was an Italian idealist philosopher, and occasionally also politician. He wrote on numerous topics, including philosophy, history, methodology of history writing and aesthetics, and was a prominent liberal, although he opposed laissez-faire free trade...
, Gobetti identified cultural change with a spiritual transformation that would unite public and private life. He also attached himself to causes such as educational reform and votes for women led by the independent deputy, Gaetano Salvemini
Gaetano Salvemini
Gaetano Salvemini was an Italian anti-fascist politician, historian and writer.- Biography :Salvemini was born in Molfetta, Apulia....
.

In 1920 Gobetti was influenced by Antonio Gramsci
Antonio Gramsci
Antonio Gramsci was an Italian writer, politician, political philosopher, and linguist. He was a founding member and onetime leader of the Communist Party of Italy and was imprisoned by Benito Mussolini's Fascist regime...
, fellow ex-student and Communist
Communist Party of Italy
The Communist Party of Italy was a communist political party in Italy which existed from 1921 to 1926. That year it was outlawed by Benito Mussolini's fascist regime. In 1943, the name was changed to the Italian Communist Party.-Foundation:The forerunner of the party was the Communist Faction...
editor of the L'Ordine Nuovo
L'Ordine Nuovo
L'Ordine Nuovo was a weekly newspaper established in 1919 in Turin, Italy, by a group, including Antonio Gramsci, Angelo Tasca and Palmiro Togliatti, within the Italian Socialist Party. The group were admirers of the Russian Revolution and strongly supported the immediate creation of soviets in...
('New Order'). Gramsci was the leading intellectual during the proletarian unrest
Biennio rosso
The Biennio Rosso was a two year period, between 1919 and 1920, of intense social conflict in Italy. The Biennio Rosso was followed by the extremely violent reaction of the Fascist blackshirts militia and eventually by the March on Rome of Benito Mussolini in 1922...
in Turin in 1919-1920 which led to the factory occupations in September, 1920. Inspired by the workers' movement and Gramsci's argument that they constituted a new revolutionary subject, Gobetti gave up editing Energie Nove in order to rethink his commitments.

In 1922, he began publishing a new review, La Rivoluzione Liberale ("Liberal Revolution"). Here he expounded a distinctive version of liberalism
Liberalism
Liberalism is the belief in the importance of liberty and equal rights. Liberals espouse a wide array of views depending on their understanding of these principles, but generally, liberals support ideas such as constitutionalism, liberal democracy, free and fair elections, human rights,...
, conceived as a philosophy of liberation rather than a party doctrine. Deeply moved by the Russian revolution, which he understood as a liberal event, Gobetti conceived the working class
Working class
Working class is a term used in the social sciences and in ordinary conversation to describe those employed in lower tier jobs , often extending to those in unemployment or otherwise possessing below-average incomes...
as the leading subject of a liberal revolution. In seeking to take over the factories and govern themselves, he argued, the workers expressed a desire for autonomy and collective freedom that could renew Italy. Liberals, Gobetti argued, should understand the term 'liberal' as adaptable to different classes and institutional arrangements other than the bourgeoisie and parliamentary democracy.

Gobetti was also highly attentive to the dangers of Benito Mussolini
Benito Mussolini
Benito Amilcare Andrea Mussolini was an Italian politician who led the National Fascist Party and is credited with being one of the key figures in the creation of Fascism....
's Fascist Party, which entered government in October, 1922. Whilst conservative liberals hoped to make temporary use of Mussolini's popularity in order to restore parliament, Gobetti recognised the tyrannical orientation of fascism
Fascism
Fascism is a radical authoritarian nationalist political ideology. Fascists seek to rejuvenate their nation based on commitment to the national community as an organic entity, in which individuals are bound together in national identity by suprapersonal connections of ancestry, culture, and blood...
. He claimed fascism represented the 'autobiography of the nation', an accretion of all the ills of Italian society. In particular, fascism continued a political tradition of compromise, absorbing political opponents rather than allowing conflict to express itself openly. Liberalism, he argued, was anti-fascist insofar as, on his account, it recognised that liberty was achieved through struggle and conflict.

In late 1924 Gobetti also began to edit a journal of European literary culture entitled Il Baretti. He used the journal to put into practice his idea of liberal anti-fascism and his conviction that the Italian people could learn to reject the insular nature of fascist culture by means of an education in European culture.

For his rigid opposition to Fascism, Gobetti's review was closed down and he himself was assaulted by fascist thugs. He was beaten up in 1925 and escaped to Paris early the next year. He died there in February, 1926. He is buried in the Pere Lachaise cemetery
Père Lachaise Cemetery
Père Lachaise Cemetery is the largest cemetery in the city of Paris, France , though there are larger cemeteries in the city's suburbs.Père Lachaise is in the 20th arrondissement, and is reputed to be the world's most-visited cemetery, attracting hundreds of thousands of visitors annually to the...
.

Following his death, and despite his relatively few writings, Gobetti became a symbol of liberal anti-fascism, inspiring intellectuals such as Carlo Levi
Carlo Levi
Dr. Carlo Levi was an Italian-Jewish painter, writer, activist, anti-fascist, and doctor.He is best known for his book Cristo si è fermato a Eboli , published in 1945, a memoir of his time spent in exile in Lucania, Italy, after being arrested in connection with his political activism...
and Norberto Bobbio
Norberto Bobbio
Norberto Bobbio was an Italian philosopher of law and political sciences and a historian of political thought. He also wrote regularly for the Turin-based daily La Stampa....
.