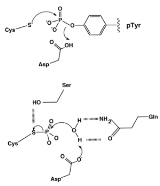 Overview
A phosphatase is an enzyme
Enzyme
Enzymes are proteins that catalyze chemical reactions. In enzymatic reactions, the molecules at the beginning of the process, called substrates, are converted into different molecules, called products. Almost all chemical reactions in a biological cell need enzymes in order to occur at rates...
that removes a phosphate group from its substrate
Substrate (biochemistry)
In biochemistry, a substrate is a molecule upon which an enzyme acts. Enzymes catalyze chemical reactions involving the substrate. In the case of a single substrate, the substrate binds with the enzyme active site, and an enzyme-substrate complex is formed. The substrate is transformed into one or...
by hydrolysing
Hydrolysis
Hydrolysis is a chemical reaction during which molecules of water are split into hydrogen cations and hydroxide anions in the process of a chemical mechanism. It is the type of reaction that is used to break down certain polymers, especially those made by condensation polymerization...
phosphoric acid
Phosphoric acid
Phosphoric acid, also known as orthophosphoric acid or phosphoric acid, is a mineral acid having the chemical formula H3PO4. Orthophosphoric acid molecules can combine with themselves to form a variety of compounds which are also referred to as phosphoric acids, but in a more general way...
monoester
Ester
Esters are chemical compounds derived by reacting an oxoacid with a hydroxyl compound such as an alcohol or phenol. Esters are usually derived from an inorganic acid or organic acid in which at least one -OH group is replaced by an -O-alkyl group, and most commonly from carboxylic acids and...
s into a phosphate
Phosphate
A phosphate, an inorganic chemical, is a salt of phosphoric acid. In organic chemistry, a phosphate, or organophosphate, is an ester of phosphoric acid. Organic phosphates are important in biochemistry and biogeochemistry or ecology. Inorganic phosphates are mined to obtain phosphorus for use in...
ion
Ion
An ion is an atom or molecule in which the total number of electrons is not equal to the total number of protons, giving it a net positive or negative electrical charge. The name was given by physicist Michael Faraday for the substances that allow a current to pass between electrodes in a...
and a molecule with a free hydroxyl
Hydroxyl
A hydroxyl is a chemical group containing an oxygen atom covalently bonded with a hydrogen atom. In inorganic chemistry, the hydroxyl group is known as the hydroxide ion, and scientists and reference works generally use these different terms though they refer to the same chemical structure in...
group (see dephosphorylation
Dephosphorylation
Dephosphorylation is the essential process of removing phosphate groups from an organic compound by hydrolysis. Its opposite is phosphorylation...
). This action is directly opposite to that of phosphorylase
Phosphorylase
Phosphorylases are enzymes that catalyze the addition of a phosphate group from an inorganic phosphate to an acceptor.They include allosteric enzymes that catalyze the production of glucose-1-phosphate from a glucan such as glycogen, starch or maltodextrin. Phosphorylase is also a common name used...
s and kinase
Kinase
In chemistry and biochemistry, a kinase is a type of enzyme that transfers phosphate groups from high-energy donor molecules, such as ATP, to specific substrates, a process referred to as phosphorylation. Kinases are part of the larger family of phosphotransferases...
s, which attach phosphate groups to their substrates
Phosphorylation
Phosphorylation is the addition of a phosphate group to a protein or other organic molecule. Phosphorylation activates or deactivates many protein enzymes....
by using energetic molecules like ATP
Adenosine triphosphate
Adenosine-5'-triphosphate is a multifunctional nucleoside triphosphate used in cells as a coenzyme. It is often called the "molecular unit of currency" of intracellular energy transfer. ATP transports chemical energy within cells for metabolism...
. A common phosphatase in many organisms is alkaline phosphatase
Alkaline phosphatase
Alkaline phosphatase is a hydrolase enzyme responsible for removing phosphate groups from many types of molecules, including nucleotides, proteins, and alkaloids. The process of removing the phosphate group is called dephosphorylation...
.

Protein phosphorylation is the most common and important form of reversible protein posttranslational modification (PTM), with up to 30% of all proteins being phosphorylated at any given time.

What are the commercial applications of acid phosphatases
More
x