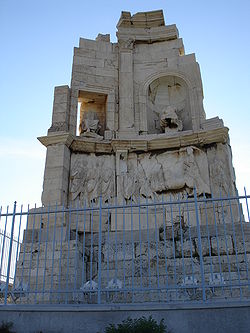 The Philopappos Monument is an ancient Greek
Ancient Greek
Ancient Greek is the stage of the Greek language in the periods spanning the times c. 9th–6th centuries BC, , c. 5th–4th centuries BC , and the c. 3rd century BC – 6th century AD of ancient Greece and the ancient world; being predated in the 2nd millennium BC by Mycenaean Greek...
mausoleum
Mausoleum
A mausoleum is an external free-standing building constructed as a monument enclosing the interment space or burial chamber of a deceased person or persons. A monument without the interment is a cenotaph. A mausoleum may be considered a type of tomb or the tomb may be considered to be within the...
and monument
Monument
A monument is a type of structure either explicitly created to commemorate a person or important event or which has become important to a social group as a part of their remembrance of historic times or cultural heritage, or simply as an example of historic architecture...
dedicated to Gaius Julius Antiochus Epiphanes Philopappos
Philopappos
Gaius Julius Antiochus Epiphanes Philopappos or Philopappus, was a Prince of the Kingdom of Commagene who lived in the Roman Empire during the 1st century and 2nd century. He was one of the most prominent Greeks who lived in the Roman Empire....
or Philopappus, , a prince from the Kingdom of Commagene
Kingdom of Commagene
The Kingdom of Commagene was an ancient kingdom of the Hellenistic Age.Little is known of the region of Commagene prior to the beginning of the 2nd century BC. However, it seems that, from what little evidence remains, Commagene formed part of a larger state that also included Sophene...
. It is located on Mouseion Hill in Athens
Athens
Athens , is the capital and largest city of Greece. Athens dominates the Attica region and is one of the world's oldest cities, as its recorded history spans around 3,400 years. Classical Athens was a powerful city-state...
, Greece
Greece
Greece , officially the Hellenic Republic , and historically Hellas or the Republic of Greece in English, is a country in southeastern Europe....
, southwest of the Acropolis
Acropolis of Athens
The Acropolis of Athens or Citadel of Athens is the best known acropolis in the world. Although there are many other acropoleis in Greece, the significance of the Acropolis of Athens is such that it is commonly known as The Acropolis without qualification...
.

The Greek geographer Pausanias
Pausanias (geographer)
Pausanias was a Greek traveler and geographer of the 2nd century AD, who lived in the times of Hadrian, Antoninus Pius and Marcus Aurelius. He is famous for his Description of Greece , a lengthy work that describes ancient Greece from firsthand observations, and is a crucial link between classical...
(Description of Greece, I.25.8), describes Philopappos’ grand tomb as a monument built for a Syrian man. The monument was built on the same site where Musaios or Musaeus
Musaeus
Musaeus or Musaios was the name of three Greek poets.-Musaeus of Athens:Musaeus was a legendary polymath, philosopher, historian, prophet, seer, priest, poet, and musician, said to have been the founder of priestly poetry in Attica...
, a 6th century BC priestly poet and mystical seer, was held to have been buried. The location of this tomb, opposite the Acropolis and within formal boundaries of the city, shows the high position Philopappos had within Athenian society.

Philopappos’ monument is a two-storey structure, supported by a base. On the lower level there is a frieze representing Philopappos as a consul
Roman consul
A consul served in the highest elected political office of the Roman Republic.Each year, two consuls were elected together, to serve for a one-year term. Each consul was given veto power over his colleague and the officials would alternate each month...
, riding on a chariot and led by lictor
Lictor
The lictor was a member of a special class of Roman civil servant, with special tasks of attending and guarding magistrates of the Roman Republic and Empire who held imperium, the right and power to command; essentially, a bodyguard...
s. The upper level shows statues of three men: of Antiochus IV
Antiochus IV of Commagene
Gaius Julius Antiochus IV Epiphanes , the last king of Commagene, reigned between 38-72 as a client king to the Roman Empire.-Life:Antiochus was a prince and son of Antiochus III of Commagene and his mother was Queen Iotapa of Commagene. The parents of Antiochus IV were full-blooded siblings, who...
on the left, of Philopappos in the centre and of Seleucus I Nicator
Seleucus I Nicator
Seleucus I was a Macedonian officer of Alexander the Great and one of the Diadochi. In the Wars of the Diadochi that took place after Alexander's death, Seleucus established the Seleucid dynasty and the Seleucid Empire...
, now lost, on the right.

In the niche below Philopappos is an inscription that says: Φιλόπαππος Επιφάνους Βησαιευς, ("Philopappos, son of Epiphanes of the deme
Deme
In Ancient Greece, a deme or demos was a subdivision of Attica, the region of Greece surrounding Athens. Demes as simple subdivisions of land in the countryside seem to have existed in the 6th century BC and earlier, but did not acquire particular significance until the reforms of Cleisthenes in...
of the Besa"). This was the name Philopappos carried as an Athenian citizen. In the niche left of Philopappos, an inscription in Latin, records Philopappos’ titles, honors and his career as a Roman magistrate: "Caius Iulius Antiochus Philopappos, son of Caius, of the Fabian tribe, consul and Arval brother, admitted to the praetorian rank by the emperor Caesar Nerva Trajan Optumus Augustus Germanicus Dacicus". On the right niche of Philopappos once read a Greek inscription (now the base is only preserved): Βασιλεύς Αντίοχος Φιλόπαππος Βασιλέως Επιφανούς Αντιόχου ("King Antiochus Philopappos, son of King Epiphanes, son of Antiochus").

Below the statue of Antiochus IV, Philopappos' paternal grandfather, is an inscription that states "King Antiochus son of King Antiochus". This inscription honors Antiochus IV and his late father, the last independent ruler of the Kingdom of Commagene
Kingdom of Commagene
The Kingdom of Commagene was an ancient kingdom of the Hellenistic Age.Little is known of the region of Commagene prior to the beginning of the 2nd century BC. However, it seems that, from what little evidence remains, Commagene formed part of a larger state that also included Sophene...
, King Antiochus III Epiphanes
Antiochus III of Commagene
Antiochus III Epiphanes was the ruler of the Kingdom of Commagene from 12 BC to 17 AD. He was the son and successor of King Mithridates III of Commagene and Princess of Media and Queen of Commagene, Iotapa, and of mixed Armenian, Greek and Median descent. His parents were first cousins.When...
. When Antiochus III died in 17, Commagene was annexed by the Roman Emperor
Roman Emperor
The Roman emperor was the ruler of the Roman State during the imperial period . The Romans had no single term for the office although at any given time, a given title was associated with the emperor...
Tiberius
Tiberius
Tiberius , was Roman Emperor from 14 AD to 37 AD. Tiberius was by birth a Claudian, son of Tiberius Claudius Nero and Livia Drusilla. His mother divorced Nero and married Augustus in 39 BC, making him a step-son of Octavian...
and became a part of the Roman Empire
Roman Empire
The Roman Empire was the post-Republican period of the ancient Roman civilization, characterised by an autocratic form of government and large territorial holdings in Europe and around the Mediterranean....
. Below the statue of Seleucus I, the founder of the Seleucid Empire
Seleucid Empire
The Seleucid Empire was a Greek-Macedonian state that was created out of the eastern conquests of Alexander the Great. At the height of its power, it included central Anatolia, the Levant, Mesopotamia, Persia, today's Turkmenistan, Pamir and parts of Pakistan.The Seleucid Empire was a major centre...
from whom the Commagene kings claimed descent, stood another inscription, now lost. The traveller Cyriacus of Ancona wrote in his memoir that underneath th inscription stated "King Seleucus Nicator, son of Antiochus".

The monument measures 9.80 m × 9.30 m, and contains Philopappos’ burial chamber. The structure is built of white Penteli
Penteli
Pentéli or Pendeli, , and Vrilissos or Vrilittos , Mendeli in medieval times) is a tall mountain and mountain range situated northeast of Athens and southwest of Marathon. Its elevation is 1,109 m...
c marble on a socle 3.08 m high, made of poros marble and veneered with slabs of Hymettian
Hymettus
Hymettus, also Hymettos is a mountain range in the Athens area, East Central Greece. It is also colloquially known as Trellos or Trellovouno , a name of uncertain origin...
marble. The north side of Philopappos’ monument bears lavish architectural decorations.

In 1898, excavations were carried out at the monument and in 1899 conservation work was undertaken. Archaeologists in 1940, H. A. Thompson and J. Travios conducted small additional excavations. Recent investigations have certified that architectural parts of Philopappos’ Monument have been used for construction of the Minaret in the Parthenon
Parthenon
The Parthenon is a temple on the Athenian Acropolis, Greece, dedicated to the Greek goddess Athena, whom the people of Athens considered their virgin patron. Its construction began in 447 BC when the Athenian Empire was at the height of its power. It was completed in 438 BC, although...
.

Only two-thirds of the façade remains. The tomb chamber behind the façade is completely destroyed except for the base. The Philopappos Monument appeared to be intact until recently as in 1436, the traveller Cyriacus of Ancona
Ancona
Ancona is a city and a seaport in the Marche region, in central Italy, with a population of 101,909 . Ancona is the capital of the province of Ancona and of the region....
visited the monument and wrote in his memoirs that the monument was still intact. The destruction of the monument must have occurred after this time.