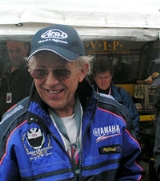 Phillip William Read (born 1 January 1939 in Luton
Luton
Luton is a large town and unitary authority of Bedfordshire, England, 30 miles north of London. Luton and its near neighbours, Dunstable and Houghton Regis, form the Luton/Dunstable Urban Area with a population of about 250,000....
, England
England
England is a country that is part of the United Kingdom. It shares land borders with Scotland to the north and Wales to the west; the Irish Sea is to the north west, the Celtic Sea to the south west, with the North Sea to the east and the English Channel to the south separating it from continental...
) is an English former Grand Prix
Grand Prix motorcycle racing
Road Racing World Championship Grand Prix is the premier championship of motorcycle road racing currently divided into three distinct classes: 125cc, Moto2 and MotoGP. The 125cc class uses a two-stroke engine while Moto2 and MotoGP use four-stroke engines. In 2010 the 250cc two-stroke was replaced...
motorcycle
Motorcycle
A motorcycle is a single-track, two-wheeled motor vehicle. Motorcycles vary considerably depending on the task for which they are designed, such as long distance travel, navigating congested urban traffic, cruising, sport and racing, or off-road conditions.Motorcycles are one of the most...
road racer
Road racing
Road racing is a general term for most forms of motor racing held on paved, purpose-built race tracks , as opposed to oval tracks and off-road racing...
nicknamed "The Prince of Speed." Although he would often be overshadowed by his contemporary, Mike Hailwood
Mike Hailwood
Stanley Michael Bailey Hailwood, MBE, GM was a British Grand Prix motorcycle road racer regarded by many as one of the greatest racers of all time. He was known as "Mike The Bike" because of his natural riding ability...
, he would become the first man to win world championships in the 125cc, 250cc and 500cc classes.