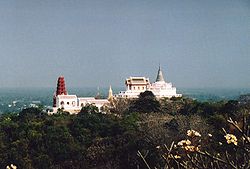 Phra Nakhon Khiri is a historical park
Historical parks of Thailand
Historical parks in Thailand are managed by the Fine Arts Department, a sub-division of the Ministry of Education. There are currently ten parks, with four them registered as World Heritage Sites by the UNESCO....
in Phetchaburi
Phetchaburi Province
Phetchaburi is one of the central provinces of Thailand. Neighboring provinces are Ratchaburi, Samut Songkhram and Prachuap Khiri Khan...
, Thailand
Thailand
Thailand , officially the Kingdom of Thailand , formerly known as Siam , is a country located at the centre of the Indochina peninsula and Southeast Asia. It is bordered to the north by Burma and Laos, to the east by Laos and Cambodia, to the south by the Gulf of Thailand and Malaysia, and to the...
, located on a hill overlooking the city. The name Phra Nakhon Khiri means Holy City Hill, but locals know it better as Khao Wang, meaning hill with palace.

The park consists of three building groups, located on the three peaks of the 92m high hill. On the western peak is the actual palace
Palace
A palace is a grand residence, especially a royal residence or the home of a head of state or some other high-ranking dignitary, such as a bishop or archbishop. The word itself is derived from the Latin name Palātium, for Palatine Hill, one of the seven hills in Rome. In many parts of Europe, the...
with adjoining structures. The middle or central peak is a big chedi
Stupa
A stupa is a mound-like structure containing Buddhist relics, typically the remains of Buddha, used by Buddhists as a place of worship....
named Phra That Chom Phet. The eastern peak houses the Wat Phra Kaeo, the royal temple
Temple
A temple is a structure reserved for religious or spiritual activities, such as prayer and sacrifice, or analogous rites. A templum constituted a sacred precinct as defined by a priest, or augur. It has the same root as the word "template," a plan in preparation of the building that was marked out...
, built in similar fashion to the Wat Phra Kaeo
Wat Phra Kaew
The Wat Phra Kaew is regarded as the most sacred Buddhist temple in Thailand. It is a "potent religio-political symbol and the palladium of Thai society". It is located in the historic centre of Bangkok , within the precincts of the Grand Palace.The main building is the central ubosoth, which...
in Bangkok
Bangkok
Bangkok is the capital and largest urban area city in Thailand. It is known in Thai as Krung Thep Maha Nakhon or simply Krung Thep , meaning "city of angels." The full name of Bangkok is Krung Thep Mahanakhon Amon Rattanakosin Mahintharayutthaya Mahadilok Phop Noppharat Ratchathani Burirom...
. The whole complex was built as a summer palace by King Mongkut
Mongkut
Phra Bat Somdet Phra Poramenthramaha Mongkut Phra Chom Klao Chao Yu Hua , or Rama IV, known in foreign countries as King Mongkut , was the fourth monarch of Siam under the House of Chakri, ruling from 1851-1868...
, with construction finished in 1860.

The site was registered as a historical park on August 27, 1979, with two of the palace buildings now housing a branch of the Thai National Museum
National Museum (Thailand)
The National Museum in Thailand is the main museum on the history of the Thai culture. The main museum is located in Bangkok on Na Phrathat Road next to the Sanam Luang, not far from Wat Phra Kaew....
.
The source of this article is wikipedia, the free encyclopedia.  The text of this article is licensed under the GFDL.