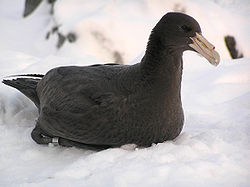 Petrels are tube-nosed seabird
Seabird
Seabirds are birds that have adapted to life within the marine environment. While seabirds vary greatly in lifestyle, behaviour and physiology, they often exhibit striking convergent evolution, as the same environmental problems and feeding niches have resulted in similar adaptations...
s in the bird
Bird
Birds are feathered, winged, bipedal, endothermic , egg-laying, vertebrate animals. Around 10,000 living species and 188 families makes them the most speciose class of tetrapod vertebrates. They inhabit ecosystems across the globe, from the Arctic to the Antarctic. Extant birds range in size from...
order Procellariiformes
Procellariiformes
Procellariiformes is an order of seabirds that comprises four families: the albatrosses, petrels and shearwaters, storm petrels, and diving petrels...
. The common name does not indicate relationship beyond that point, as "petrels" occur in three of the four families within that group (except the Albatross
Albatross
Albatrosses, of the biological family Diomedeidae, are large seabirds allied to the procellariids, storm-petrels and diving-petrels in the order Procellariiformes . They range widely in the Southern Ocean and the North Pacific...
family, Diomedeidae). Having a fossil
Fossil
Fossils are the preserved remains or traces of animals , plants, and other organisms from the remote past...
record that was assumed to extend back at least 60 million years, the Procellariiformes was long considered to be among the older bird groupings, other than the ratite
Ratite
A ratite is any of a diverse group of large, flightless birds of Gondwanan origin, most of them now extinct. Unlike other flightless birds, the ratites have no keel on their sternum—hence the name from the Latin ratis...
s, with presumably distant ties to penguin
Penguin
Penguins are a group of aquatic, flightless birds living almost exclusively in the southern hemisphere, especially in Antarctica. Highly adapted for life in the water, penguins have countershaded dark and white plumage, and their wings have become flippers...
s and loon
Loon
The loons or divers are a group of aquatic birds found in many parts of North America and northern Eurasia...
s. However, recent research and fossil finds such as Vegavis
Vegavis
Vegavis is a genus of extinct bird that lived during the Late Cretaceous of Antarctica, some 65 mya. It belonged to the clade Anseriformes...
show that the Galliformes
Galliformes
Galliformes are an order of heavy-bodied ground-feeding domestic or game bird, containing turkey, grouse, chicken, New and Old World Quail, ptarmigan, partridge, pheasant, and the Cracidae. Common names are gamefowl or gamebirds, landfowl, gallinaceous birds or galliforms...
(Pheasant
Pheasant
Pheasants refer to some members of the Phasianinae subfamily of Phasianidae in the order Galliformes.Pheasants are characterised by strong sexual dimorphism, males being highly ornate with bright colours and adornments such as wattles and long tails. Males are usually larger than females and have...
s, Grouse
Grouse
Grouse are a group of birds from the order Galliformes. They are sometimes considered a family Tetraonidae, though the American Ornithologists' Union and many others include grouse as a subfamily Tetraoninae in the family Phasianidae...
and relatives), and Anseriformes
Anseriformes
The order Anseriformes contains about 150 living species of birds in three extant families: the Anhimidae , Anseranatidae , and the Anatidae, which includes over 140 species of waterfowl, among them the ducks, geese, and swans.All species in the order are highly adapted for an aquatic existence at...
(duck
Duck
Duck is the common name for a large number of species in the Anatidae family of birds, which also includes swans and geese. The ducks are divided among several subfamilies in the Anatidae family; they do not represent a monophyletic group but a form taxon, since swans and geese are not considered...
s, geese
Goose
The word goose is the English name for a group of waterfowl, belonging to the family Anatidae. This family also includes swans, most of which are larger than true geese, and ducks, which are smaller....
) are still not fully resolved.

All the members of the order are exclusively pelagic in distribution — returning to land only to breed.

The family Procellariidae
Procellariidae
The family Procellariidae is a group of seabirds that comprises the fulmarine petrels, the gadfly petrels, the prions, and the shearwaters. This family is part of the bird order Procellariiformes , which also includes the albatrosses, the storm-petrels, and the diving petrels.The procellariids are...
is the main radiation of medium-sized true petrels, characterised by united nostrils with medium septum, and a long outer functional primary. It is dominant in the Southern Oceans, but not so in the Northern Hemisphere.

It includes a number of petrel groups, the relationships between which have finally been resolved to satisfaction (Austin, 1996; Bretagnolle et al., 1998; Nunn & Stanley, 1998 and Brooke, 2004):


The family Hydrobatidae is the storm petrels, small pelagic petrels with a fluttering flight which often follow ships.

The family Pelecanoididae is the four species of diving petrels, genus Pelacanoides. These are auk
Auk
An auk is a bird of the family Alcidae in the order Charadriiformes. Auks are superficially similar to penguins due to their black-and-white colours, their upright posture and some of their habits...
-like small petrels of the southern oceans.

The word "petrel" comes from the Latin name for the Christian Saint Peter
Saint Peter
Saint Peter or Simon Peter was an early Christian leader, who is featured prominently in the New Testament Gospels and the Acts of the Apostles. The son of John or of Jonah and from the village of Bethsaida in the province of Galilee, his brother Andrew was also an apostle...
, and refers to the habits of certain species to hover just above the ocean waves, with their feet barely touching the water, thus giving an appearance of walking on water, as St. Peter is said to have done.