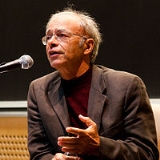 Overview
Peter Albert David Singer (born 6 July 1946) is an Australian philosopher
Philosophy
Philosophy is the study of general and fundamental problems, such as those connected with existence, knowledge, values, reason, mind, and language. Philosophy is distinguished from other ways of addressing such problems by its critical, generally systematic approach and its reliance on rational...
who is the Ira W. DeCamp Professor of Bioethics
Bioethics
Bioethics is the study of controversial ethics brought about by advances in biology and medicine. Bioethicists are concerned with the ethical questions that arise in the relationships among life sciences, biotechnology, medicine, politics, law, and philosophy....
at Princeton University
Princeton University
Princeton University is a private research university located in Princeton, New Jersey, United States. The school is one of the eight universities of the Ivy League, and is one of the nine Colonial Colleges founded before the American Revolution....
and Laureate Professor at the Centre for Applied Philosophy and Public Ethics at the University of Melbourne
University of Melbourne
The University of Melbourne is a public university located in Melbourne, Victoria. Founded in 1853, it is the second oldest university in Australia and the oldest in Victoria...
. He specialises in applied ethics
Applied ethics
Applied ethics is, in the words of Brenda Almond, co-founder of the Society for Applied Philosophy, "the philosophical examination, from a moral standpoint, of particular issues in private and public life that are matters of moral judgment"...
and approaches ethical issues from a secular
Secularity
Secularity is the state of being separate from religion.For instance, eating and bathing may be regarded as examples of secular activities, because there may not be anything inherently religious about them...
, preference utilitarian
Preference utilitarianism
Preference utilitarianism is one of the most popular forms of utilitarianism in contemporary philosophy. Unlike classical utilitarianism, which defines right actions as those that maximize pleasure and minimize pain, preference utilitarianism promotes actions that fulfill the interests of those...
perspective.

What is is point about dignity?