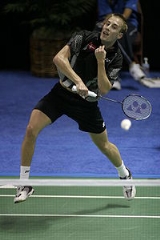 Encyclopedia
Peter Høeg Gade is a Danish professional badminton
Badminton
Badminton is a racquet sport played by either two opposing players or two opposing pairs , who take positions on opposite halves of a rectangular court that is divided by a net. Players score points by striking a shuttlecock with their racquet so that it passes over the net and lands in their...
player. He currently resides in Holte in Copenhagen
Copenhagen
Copenhagen is the capital and largest city of Denmark, with an urban population of 1,199,224 and a metropolitan population of 1,930,260 . With the completion of the transnational Øresund Bridge in 2000, Copenhagen has become the centre of the increasingly integrating Øresund Region...
. He has two children together with former handball player Camilla Høeg.

Gade has made his mark in badminton history through his All England Open Badminton Championships
All England Open Badminton Championships
The All England Open Badminton Championships, or simply All England, is one of the world's oldest and most prestigious badminton tournaments. Played annually, it developed after the success of world's first badminton tournament held in Guildford in 1898...
singles title in 1999 and his four European Championships crowns in the men's single event. The Dane topped the world rankings from 1998 to 2001. With his 16 Grand-Prix titles, he has become one of the most successful players of all time. Into his 30s, Gade remains very active on the international circuit. On June 22, 2006, he briefly recaptured the number one spot in the world rankings. This was achieved after winning the Singapore Open
Singapore Open (badminton)
The Singapore Open is an badminton event that has been held in Singapore annually since 1990, and which is now part of the BWF Super Series tournament that began 2007....
and reaching the quarter-final at the Malaysia Open
Malaysia Open (badminton)
The Malaysia Open is an annual badminton event that commonly held in Kuala Lumpur, Malaysia. The tournament has been held since 1937 and has been played in different locations such as Johor Bahru, Kota Kinabalu, Kuching, Penang, Selangor, Kuantan....
.

His playing style is known for fast attacks, smooth footwork and constant pressure. His deception is particularly creative for a world badminton player, and he uses a widely recognised and highly successful "trademark shot" (the so-called "double action" of the racket sends the shuttle to the back of the court, while aiming to bring the player towards the net). With a plethora of deceptive shots, he has been known to win points from more outrageous attempts, such as the reverse forehand (using the opposite side of the racket head to the one anticipated, to make contact with the shuttlecock at a radically different angle).

Peter Gade has represented Denmark in Badminton Singles for the two previous summer Olympics (2000 and 2004).
Gade reached the semifinals in 2000 Summer Olympics
Badminton at the 2000 Summer Olympics
Badminton was held at The Dome and Exhibition Complex at the 2000 Summer Olympics in Sydney from September 17–23, 2000. The competition included five events ....
, where he lost to eventual gold medalist Ji Xinpeng
Ji Xinpeng
Ji Xinpeng is a retired Chinese badminton player.-Career:Ji Xinpeng is the first Chinese badminton player to win an Olympic gold medal in men's singles. Having never previously captured a top tier event on the international circuit, he surprised the field at the 2000 Games in Sydney by defeating...
of China. In the bronze medal match, he lost to another Chinese player, Xia Xuanze
Xia Xuanze
Xia Xuanze is a former male Chinese badminton player who played singles at the world level from the late 1990s through the first few years of the 21st century. Now he is a men's singles coach for the national team of China.-Player Attributes:...
. At the 2004 Summer Olympics
Badminton at the 2004 Summer Olympics
Badminton at the 2004 Summer Olympics was held at the Goudi Olympic Hall at the Goudi Olympic Complex from August 14 through August 21. Both men and women competed in their own singles and doubles events and together they competed in a mixed doubles event....
in men's singles, he defeated Chien Yu-Hsiu
Chien Yu-Hsiu
Chien Yu-Hsiu is a male badminton player from the Republic of China.Chien played badminton at the 2004 Summer Olympics in men's singles, losing in the round of 32 to Peter Gade of Denmark....
of Chinese Taipei
Chinese Taipei
Chinese Taipei is the designated name used by the Republic of China , commonly known as Taiwan, to participate in some international organizations and almost all sporting events, such as the Olympics, Paralympics, Asian Games and Asian Para Games...
and Nikhil Kanetkar
Nikhil Kanetkar
Nikhil Kanetkar is a male Maharashtrian badminton player from Pune India.Kanetkar played badminton at the 2004 Summer Olympics in men's singles, defeating Sergio Llopis of Spain in the first round. In the round of 16, Kanetkar was defeated by Peter Gade of Denmark.Kanetkar became engaged to...
of India
India
India , officially the Republic of India , is a country in South Asia. It is the seventh-largest country by geographical area, the second-most populous country with over 1.2 billion people, and the most populous democracy in the world...
in the first two rounds. However, in the quarterfinals, Gade was defeated by the eventual champion, Taufik Hidayat
Taufik Hidayat
Taufik Hidayat is an Indonesian badminton player. He is a former World and Olympic champion in men's singles...
of Indonesia
Indonesia
Indonesia , officially the Republic of Indonesia , is a country in Southeast Asia and Oceania. Indonesia is an archipelago comprising approximately 13,000 islands. It has 33 provinces with over 238 million people, and is the world's fourth most populous country. Indonesia is a republic, with an...
15–12, 15–12.