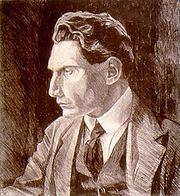 Petar Konjović (5 May 1883 – 1 October 1970) was a Serbian
Serbs
The Serbs are a South Slavic ethnic group of the Balkans and southern Central Europe. Serbs are located mainly in Serbia, Montenegro and Bosnia and Herzegovina, and form a sizable minority in Croatia, the Republic of Macedonia and Slovenia. Likewise, Serbs are an officially recognized minority in...
composer
Composer
A composer is a person who creates music, either by musical notation or oral tradition, for interpretation and performance, or through direct manipulation of sonic material through electronic media...
. He was born in Čurug
Curug
Čurug is a village in the municipality of Žabalj, in the South Bačka District of Serbia. It is situated in the Autonomous Province of Vojvodina...
(Bačka
Backa
Bačka is a geographical area within the Pannonian plain bordered by the river Danube to the west and south, and by the river Tisza to the east of which confluence is located near Titel...
). While a pedagogy student in Sombor, Konjovic self-taught himself the art of compositure and conducting. He finished his education at the Prague
Prague
Prague is the capital and largest city of the Czech Republic. Situated in the north-west of the country on the Vltava river, the city is home to about 1.3 million people, while its metropolitan area is estimated to have a population of over 2.3 million...
Conservatorium in 1906. In 1907, he traveled to Belgrade
Belgrade
Belgrade is the capital and largest city of Serbia. It is located at the confluence of the Sava and Danube rivers, where the Pannonian Plain meets the Balkans. According to official results of Census 2011, the city has a population of 1,639,121. It is one of the 15 largest cities in Europe...
, following an invitation from Stevan Mokranjac to teach composition at the Belgrade Music School. He was an active adherent of the idea of Yugoslavia
Yugoslavia
Yugoslavia refers to three political entities that existed successively on the western part of the Balkans during most of the 20th century....
. He was manager of numerous cultural institutions: head of the Serbian National Theater in Novi Sad, director of the Zagreb Opera, and head of the Croatian National Theater in Osijek. He was also a Rector
Rector
The word rector has a number of different meanings; it is widely used to refer to an academic, religious or political administrator...
of the Music Academy in Belgrade, a Serbian Academy of Sciences and Arts
Serbian Academy of Sciences and Arts
The Serbian Academy of Sciences and Arts is the most prominent academic institution in Serbia today...
(SANU) member, and a founder of the SANU Musicology
Musicology
Musicology is the scholarly study of music. The word is used in narrow, broad and intermediate senses. In the narrow sense, musicology is confined to the music history of Western culture...
Institute. His contemporaries were Petar Krstić
Petar Krstic
Petar Krstic was a Serbian composer and conductor famous throughout Yugoslavia.Krstic studied under the Austrian composer Robert Fuchs in Vienna. He was a famed conductor and pedagogue in Belgrade as well as musical leader of Belgrade radio. His most famous operas include Zulumcar 1927 and Ženidba...
, Isidor Bajić
Isidor Bajic
Isidor Bajic was a Serbian composer, pedagogue, and publisher.He was born in Kula...
, Miloje Milojević
Miloje Milojevic
Miloje Milojević was a famous Serbian composer, conductor, pianist, pedagogue, music critic, and musical writer, considered by his contemporaries as a true man of letters....
, Stevan Hristić
Stevan Hristic
Stevan Hristić , , was the most popular Serbian composer of the first half of the 20th century, remembered best for his technically cultivated compositions in the Neoromanticist, veristic, and Romanticist-Impressionist styles.-Biography:He conducted his primary studies in Leipzig, but also in...
, Stanislav Binički
Stanislav Binicki
Stanislav Binički , was a Serbian composer, conductor, and pedagogue.Binički, who was born in Jasika, Kruševac, is considered to be one of the most famous representatives of Serbian classical music...
, Bozidar Joksimović, Kosta Manojlović, Vladimir Đorđević (brother of folklorist Tihomir Đorđević), and others.

Konjović is the most significant representative of the nationalism of the Serbian modernism
Modernism
Modernism, in its broadest definition, is modern thought, character, or practice. More specifically, the term describes the modernist movement, its set of cultural tendencies and array of associated cultural movements, originally arising from wide-scale and far-reaching changes to Western society...
in music. His most famous works are operas ‘Vilin veo’ (A Fairy’s Veil), ‘Knez od Zete’ (The Prince of Zeta), ‘Koštana', 'Seljaci' (Peasants), and 'Otadžbina' (Homeland).

The period between two world wars was defined by Konjović who introduced several genres into Serbian music.

His Czech experience encouraged his natural inclination toward folk sources and he began developing melodies, like Janaček, out of the inflection of speech. Konjovic's mature style strives for direct communication with broad audience while incorporating a sophistical harmonic vocabulary. His work includes over one hundred folk songs arrangements and twenty original choral pieces.