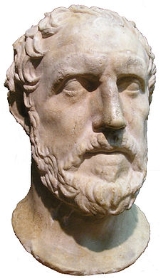 Overview
Thucydides (Greek
Ancient Greek
Ancient Greek is the stage of the Greek language in the periods spanning the times c. 9th–6th centuries BC, , c. 5th–4th centuries BC , and the c. 3rd century BC – 6th century AD of ancient Greece and the ancient world; being predated in the 2nd millennium BC by Mycenaean Greek...
Θουκυδίδης, Thoukydídēs) was a Greek
Greeks
The Greeks, also known as the Hellenes , are a nation and ethnic group native to Greece, Cyprus and neighboring regions. They also form a significant diaspora, with Greek communities established around the world....
historian
History
History is the discovery, collection, organization, and presentation of information about past events. History can also mean the period of time after writing was invented. Scholars who write about history are called historians...
and author from Alimos
Alimos
Alimos is an affluent suburb in the south-southwestern part of Athens, Greece, also known as Kalamaki . Poseidonos Avenue runs in the western part of Alimos, with the Hymettus mountain to the east meeting mainly grassland, while areas to the north of Argyroupoli are forested...
. His History of the Peloponnesian War
History of the Peloponnesian War
The History of the Peloponnesian War is an account of the Peloponnesian War in Ancient Greece, fought between the Peloponnesian League and the Delian League . It was written by Thucydides, an Athenian general who served in the war. It is widely considered a classic and regarded as one of the...
recounts the 5th century BC war
Peloponnesian War
The Peloponnesian War, 431 to 404 BC, was an ancient Greek war fought by Athens and its empire against the Peloponnesian League led by Sparta. Historians have traditionally divided the war into three phases...
between Sparta
Sparta
Sparta or Lacedaemon, was a prominent city-state in ancient Greece, situated on the banks of the River Eurotas in Laconia, in south-eastern Peloponnese. It emerged as a political entity around the 10th century BC, when the invading Dorians subjugated the local, non-Dorian population. From c...
and Athens
Athens
Athens , is the capital and largest city of Greece. Athens dominates the Attica region and is one of the world's oldest cities, as its recorded history spans around 3,400 years. Classical Athens was a powerful city-state...
to the year 411 BC. Thucydides has been dubbed the father of "scientific history", because of his strict standards of evidence-gathering and analysis in terms of cause and effect without reference to intervention by the gods, as outlined in his introduction to his work.

He has also been called the father of the school of political realism, which views the relations between nations as based on might rather than right.

I have written my work, not as an essay which is to win the applause of the moment, but as a possession for all time.

Abstinence from all injustice to other first-rate powers is a greater tower of strength than anything that can be gained by the sacrifice of permanent tranquillity for an apparent temporary advantage.

When one is deprived of ones liberty, one is right in blaming not so much the man who puts the shackles on as the one who had the power to prevent him, but did not use it.

In practice we always base our preparations against an enemy on the assumption that his plans are good; indeed, it is right to rest our hopes not on a belief in his blunders, but on the soundness of our provisions. Nor ought we to believe that there is much difference between man and man, but to think that the superiority lies with him who is reared in the severest school.

There is, however, no advantage in reflections on the past further than may be of service to the present. For the future we must provide by maintaining what the present gives us and redoubling our efforts; it is hereditary to us to win virtue as the fruit of labour, and you must not change the habit, even though you should have a slight advantage in wealth and resources; for it is not right that what was won in want should be lost in plenty.

If you give way, you will instantly have to meet some greater demand, as having been frightened into obedience in the first instance; while a firm refusal will make them clearly understand that they must treat you more as equals.